After you having seen Day 3 or maybe not, well, Day 4 of our trip was dedicated to La Rambla main street and Palau Guell which was the home of Eusebi Guell industrial wealthy and powerful businessmen. Gaudi who designed the palace was Eusebi’s friend. The palace is part of UNESCO World Heritage. The palace was built in the late 1880 and is a mixture of styles- Gothic, Islamic and art nouveau. 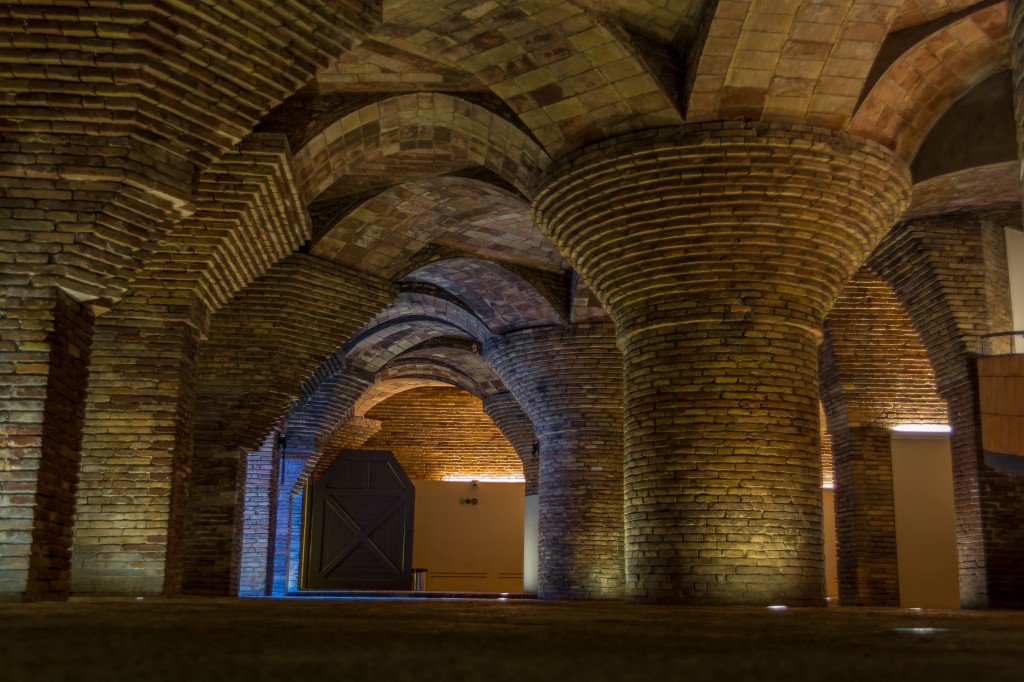 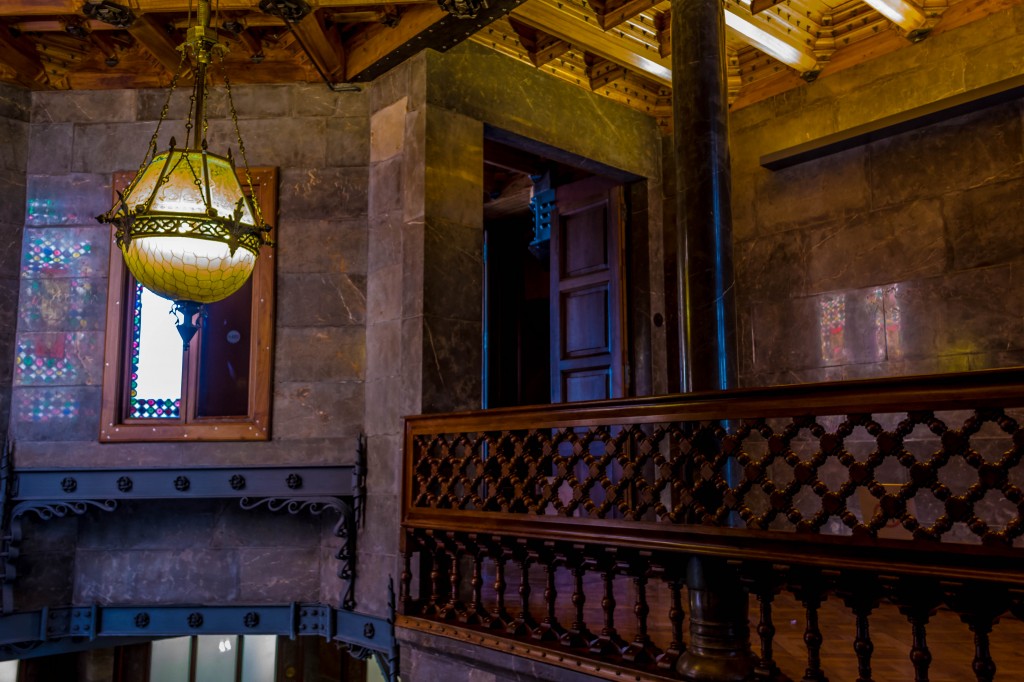 The nicest part is that one gets an audio guide when in the palace and can also see images on its screen showing how the rooms looked like back when Eusebi’s family lived in the palace. 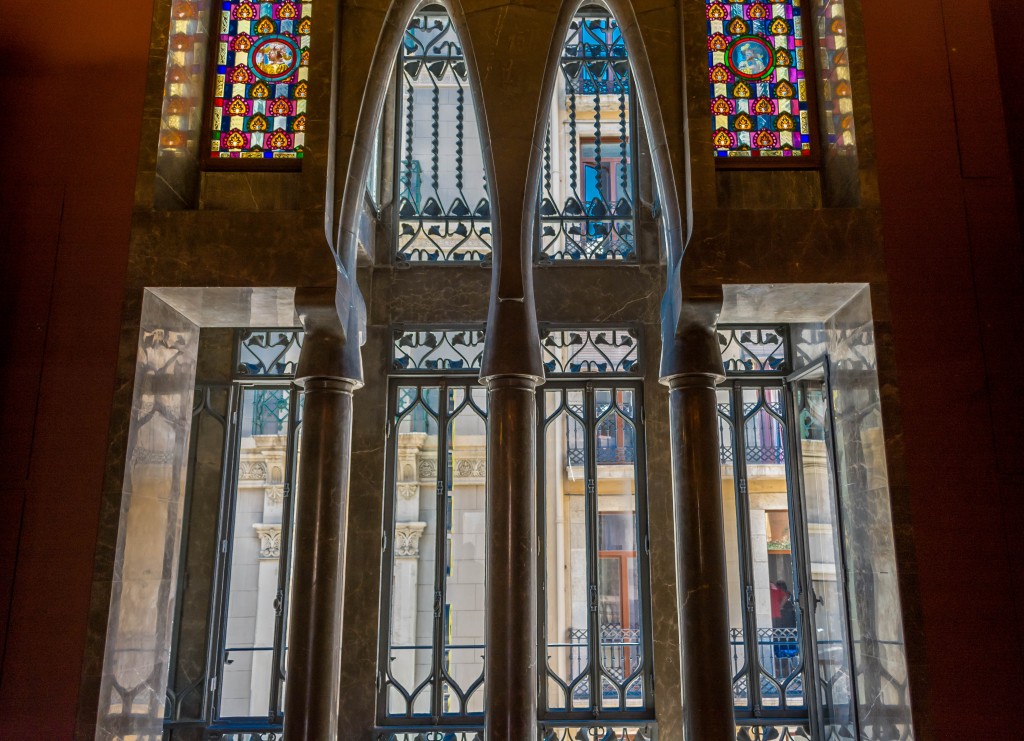 The palace is situated in the neighborhood of El Raval which is the place where people from all nationalities live, the working class or the old delinquents neighborhood. One may be a bit afraid of their possessions while walking around the El Raval area, but it is pretty safe and there are lots of police cars around. 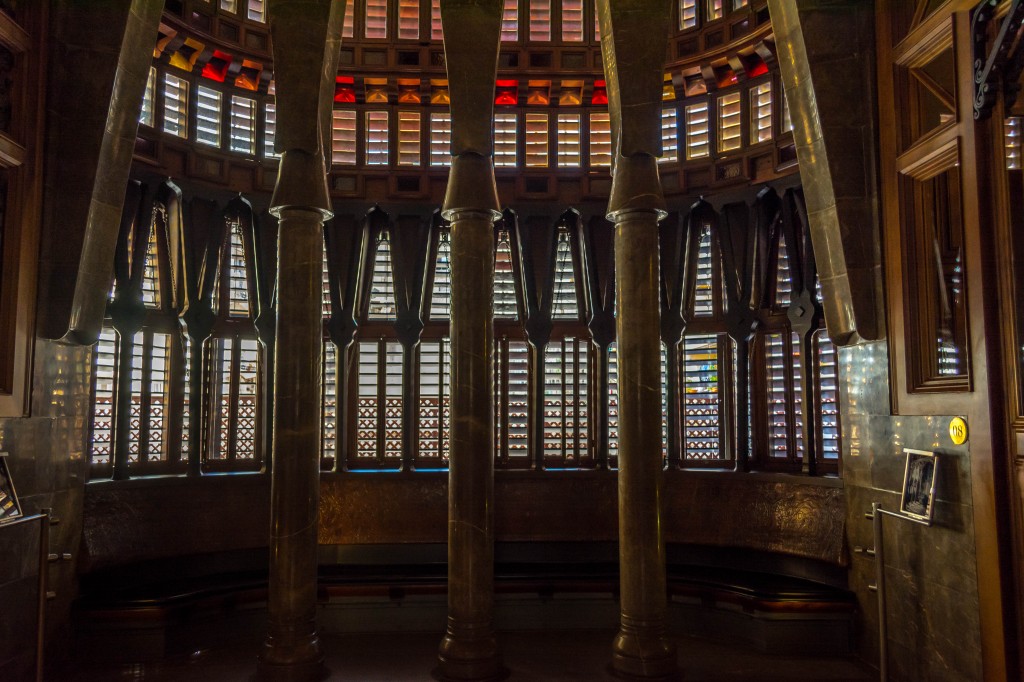 To us the palace looked a little bit demonic, maybe because dark gray stone was the main material of the rooms. 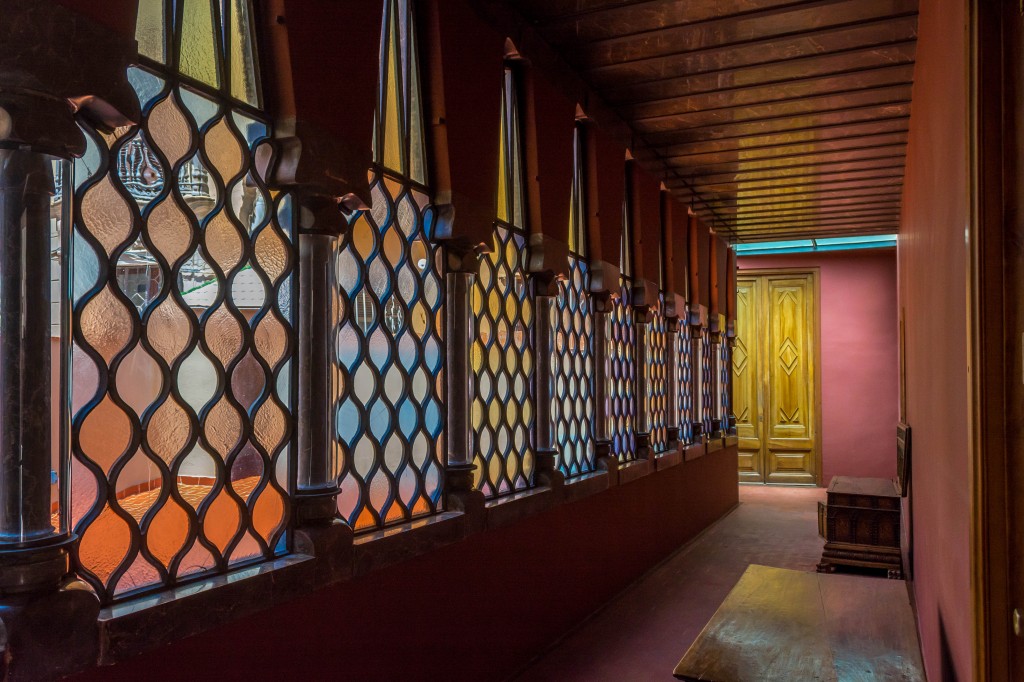 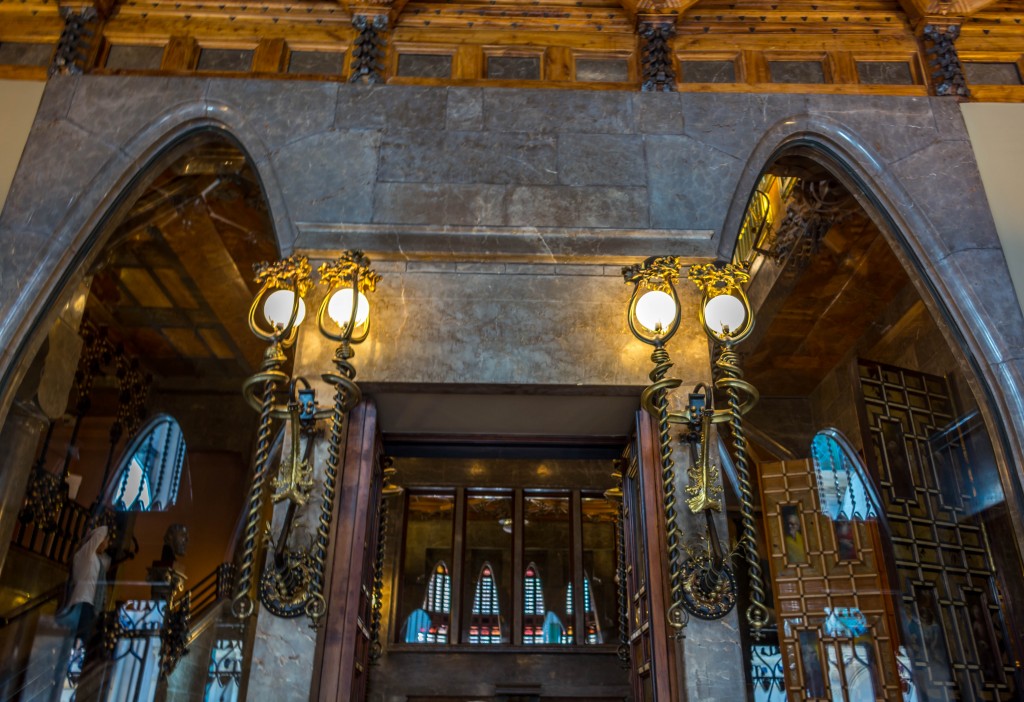 Usually it might take you a little bit more than 2 hours to visit this landmark also because there is organ music playing that you can hear from the little church site inside the palace. Imagine, they were so well-off that they had a church inside their home. 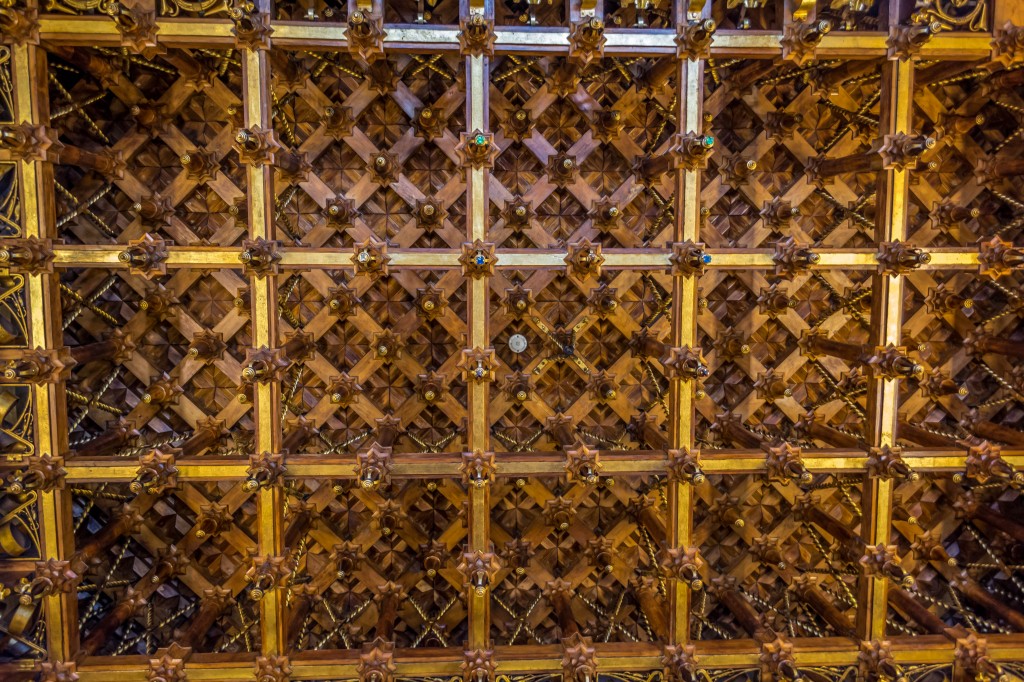 Everything is thought of in great detail. Even the ceiling looks like masterpiece. We strongly recommend that you visit this place during your stay in Barcelona, you will not regret it. It contains the alien genius of Gaudi in its whole. 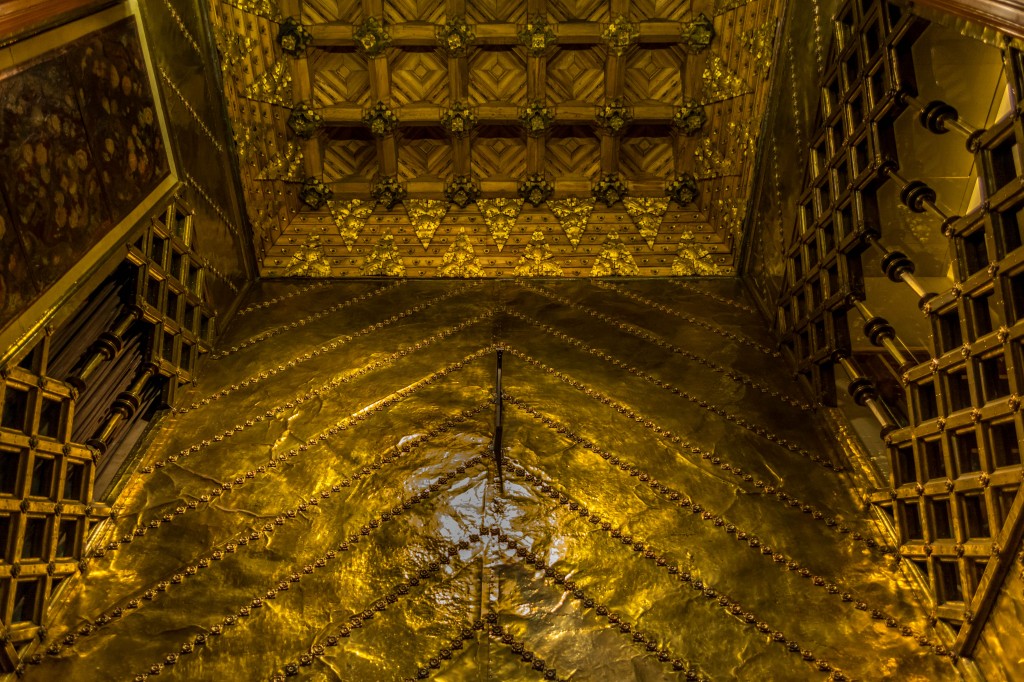 Some parts of the walls and some decorations on the doors were made from leather with special figures of flowers and other plant motives. 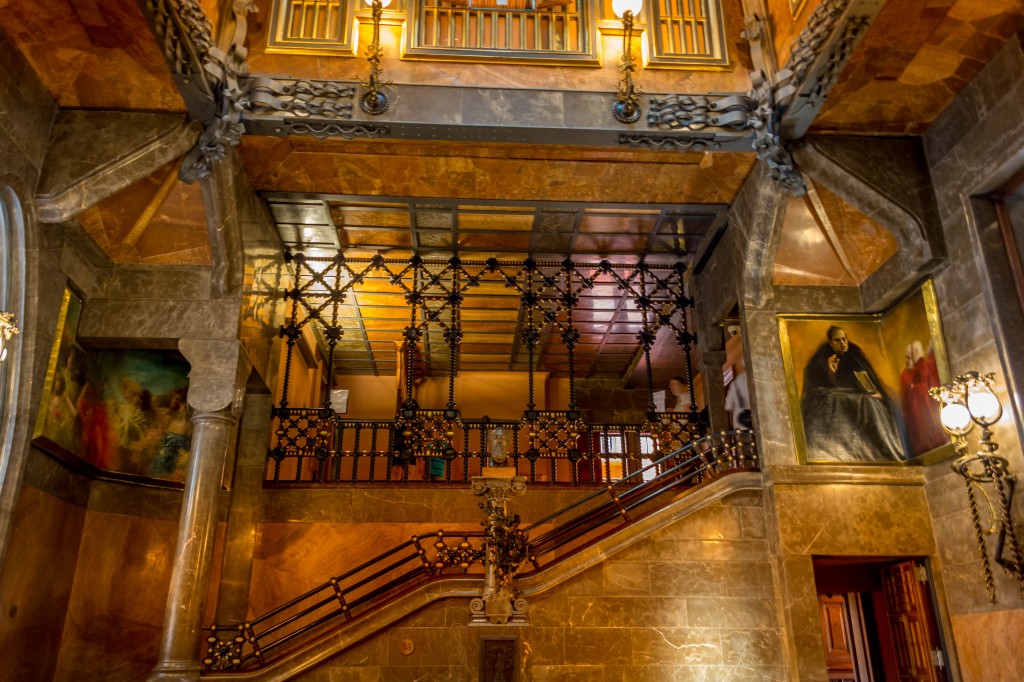 One can go up on a small balcony area that surround the main hall which has the shape of a cones. Mind the details on the next picture, it is amazing work. 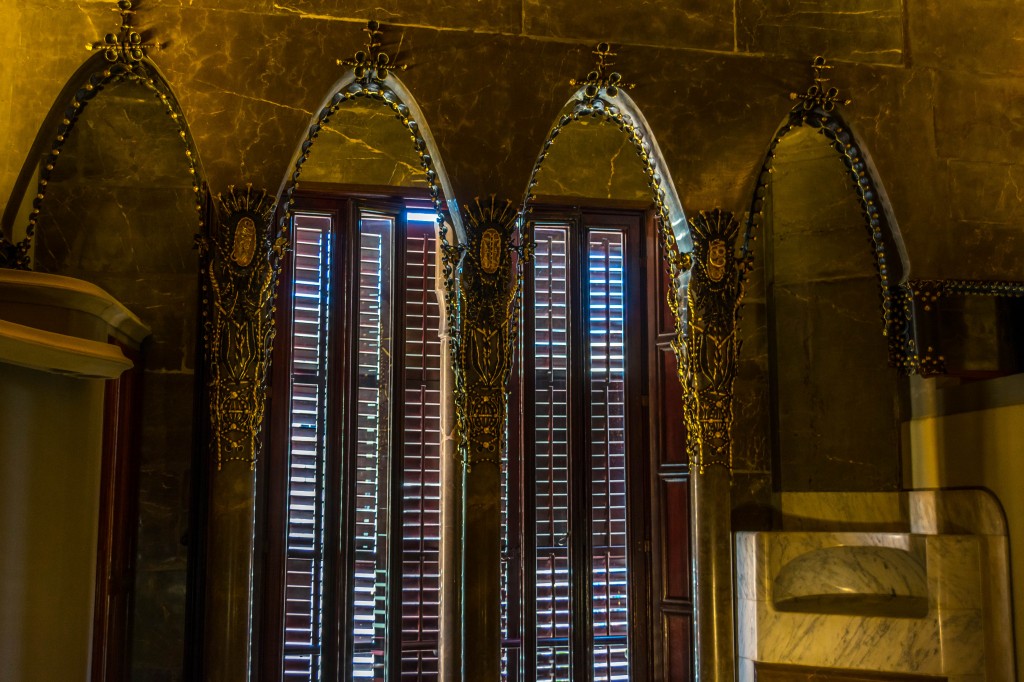 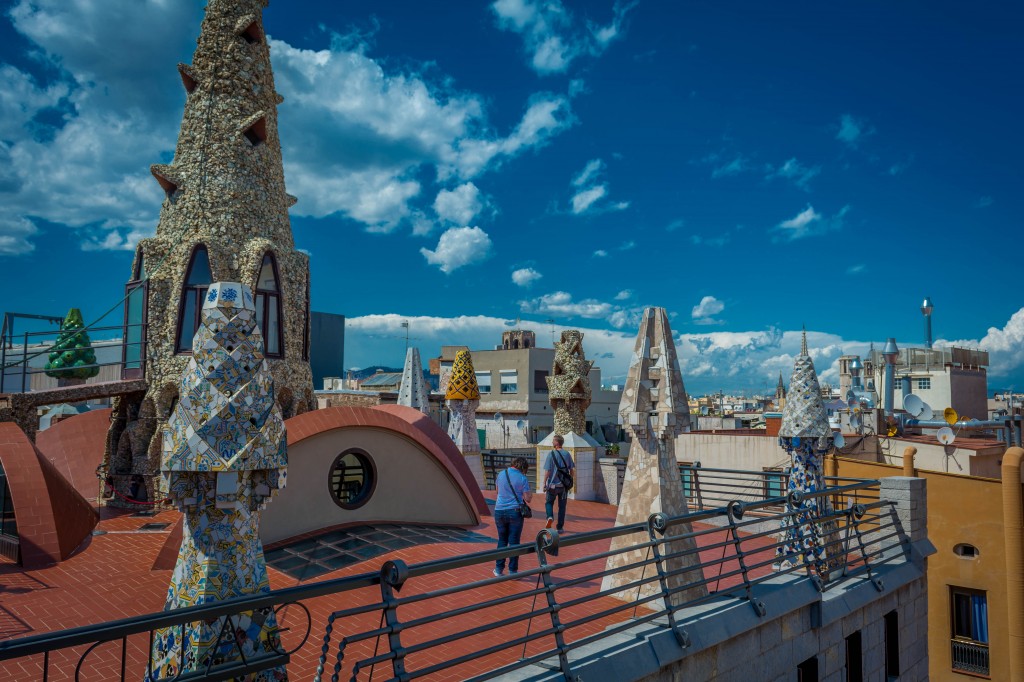 The roof chimneys and terrace

And typical in Gaudi’s style are the special chimneys, they all look incredible, not just a chimney but a monument. 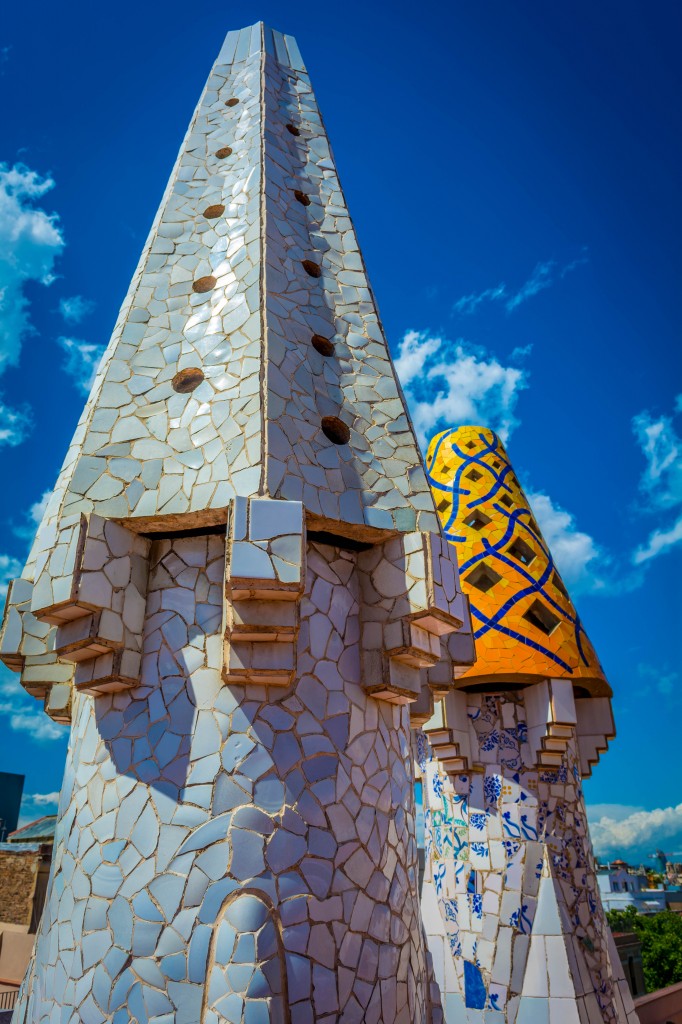 All those colors and forms send you somewhere in the fairy tales where you are a prince or princes and that is your palace. Both hands up for this amazing landmark.

As i already mentioned El Raval, a place full of colors and colorful people is just a step after the Palau Guell, and there you need to look around and see how ordinary people live. It is no longer the fancy street with old and expensive boutiques it is the place of people, those that work hard, that live in old and romantic buildings with their clothes hanging from the balconies and with the Arabic shops of spices and teas. 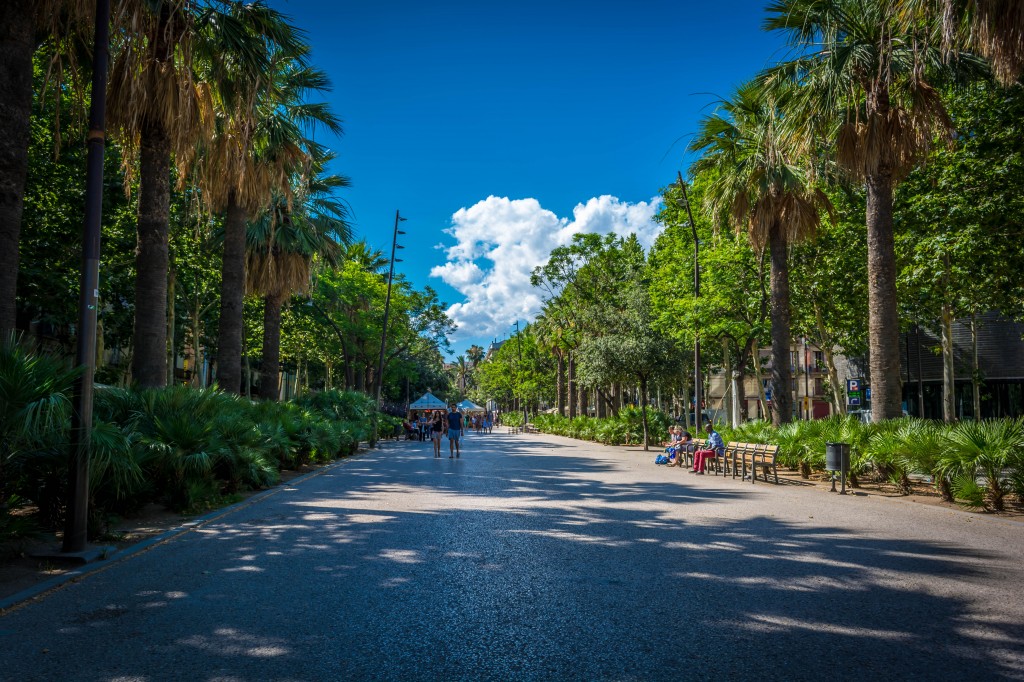 El Raval has a main street with small art stands and pedestrian area, small cafeterias and all looking totally out of time, no stress and no rush. 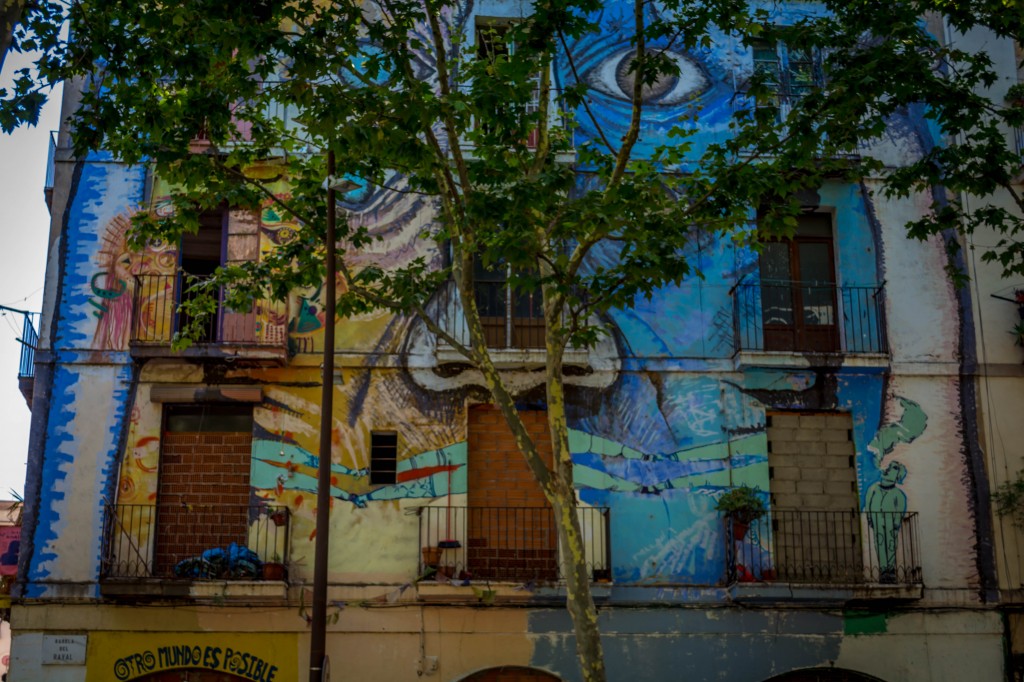 After having walked in the El Raval we decided to go back to the old Barcelona. The cathedral you see below is Santa Maria del Mar Cathedral. It is enormous and looks astonishing from inside. The cathedral is situated in one of the nicest parts of the city-the Ribera district where one can find very cheap tapas bars. It is built between 1329 and 1383. We also noticed that there are guided tours on the roof of the cathedral plus going through the towers. It costs 8 euros per person as I remember but one should talk to the guide and sign in beforehand. 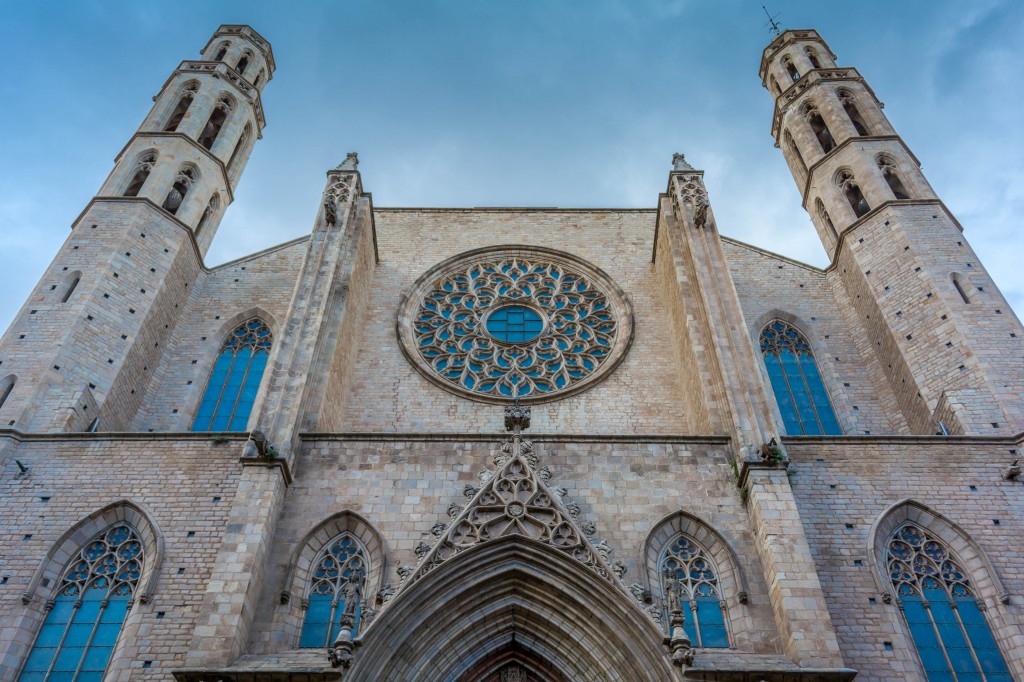 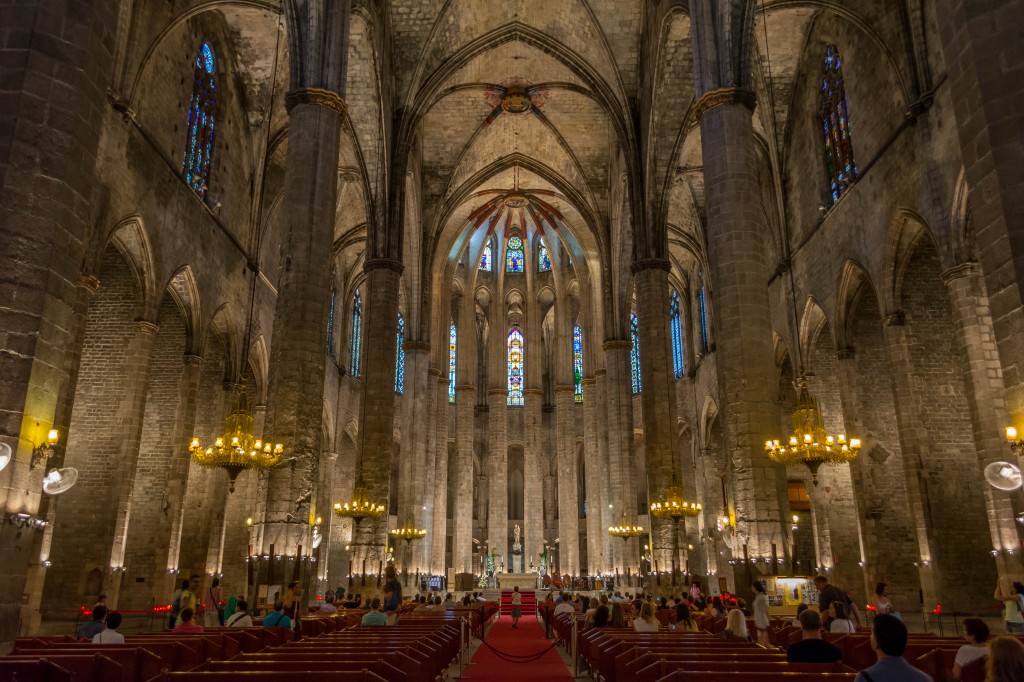 Now we know that Barcelona is the place of huge cathedrals in the Gothic style which are beautiful and full of people most of the time.

Our walked continued again in the same way and with the same pace somewhere we have not planned. Well we had the small guide booklet but sometimes we decided to take few different directions and see other beautiful streets. 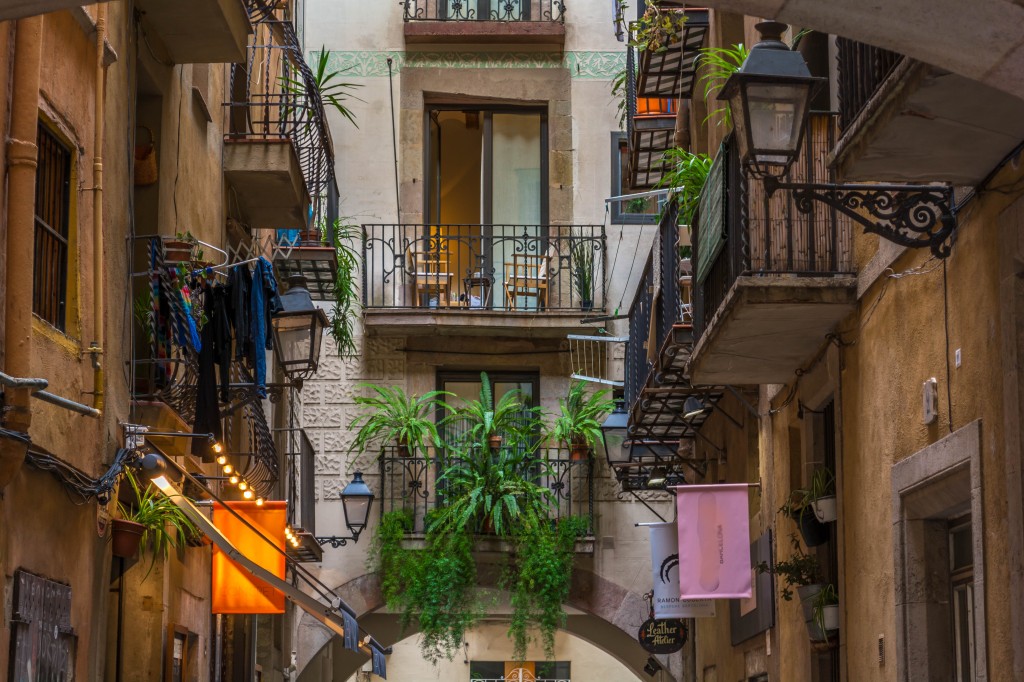 In our long and crazily, positively charging walks we arrived at Estación de Francia close of which we saw some very interesting Spanish tradition. It was the 29th of June and just a day before my birthday we saw many kids dancing with fireworks in their hands and with costumes of little devils. That was great show. 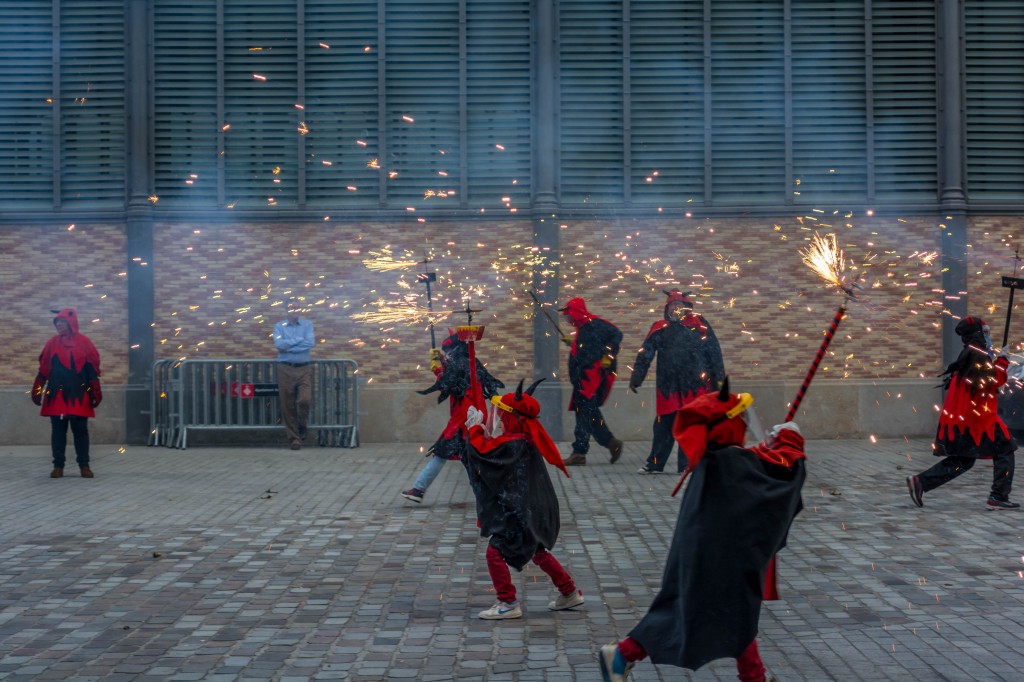 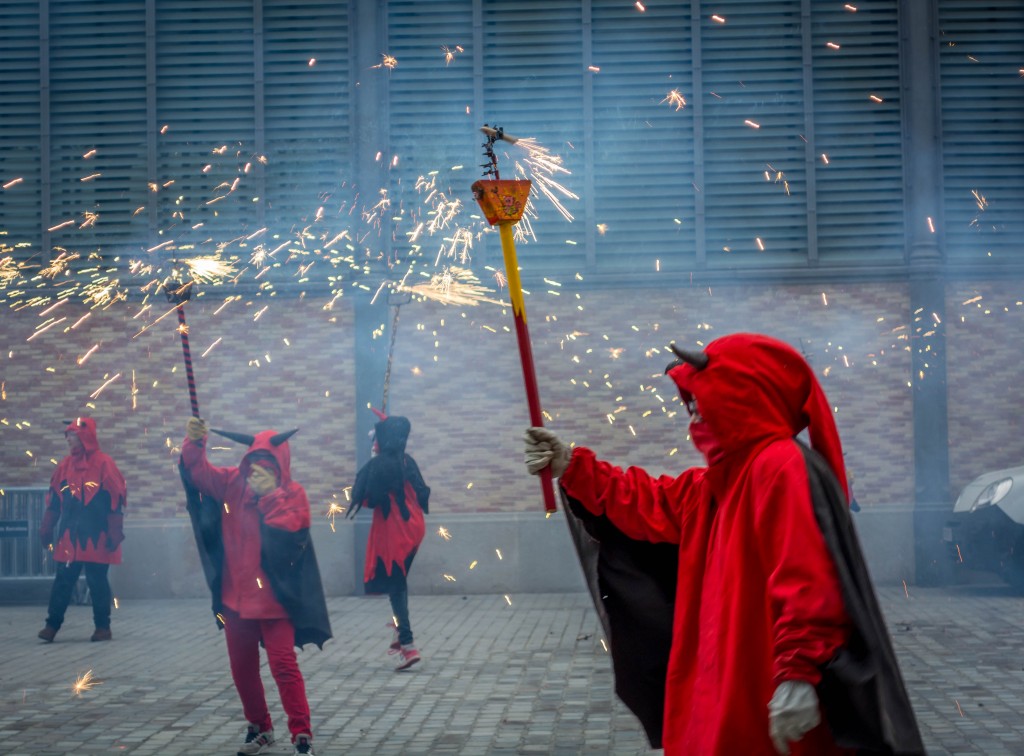 It would be nice if someone from Barcelona someday writes to me and tell me more about this midsummer Spanish or just Catalonia tradition.

In the station the main hall was also used for occasions and when we entered it there was a fashion show and part of it was closed. 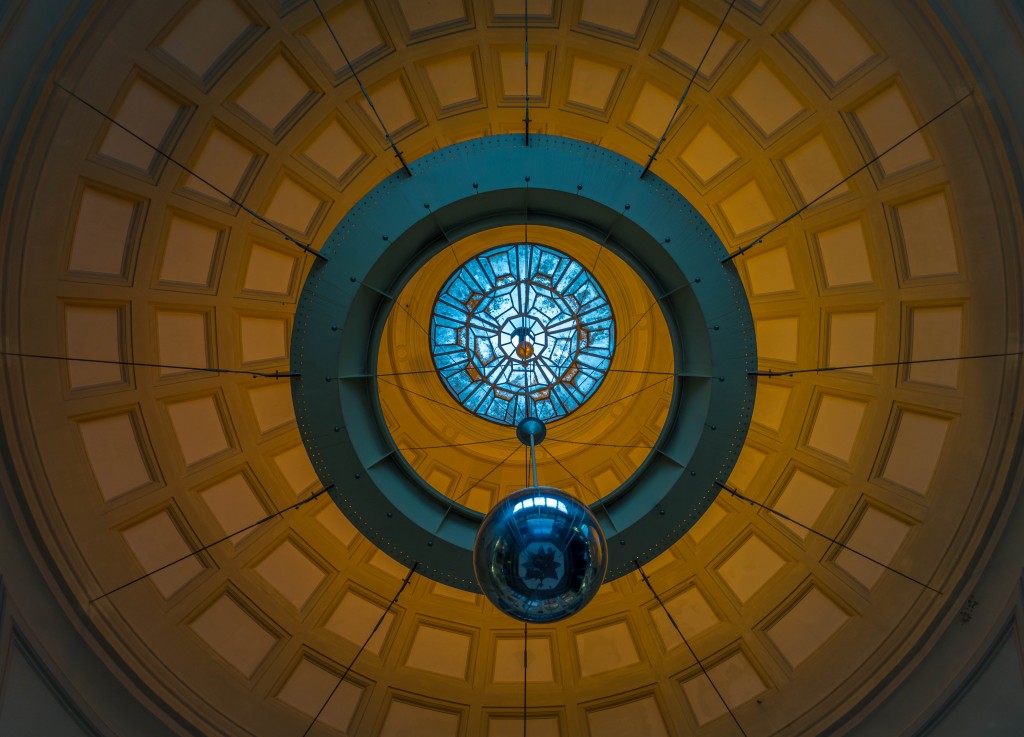