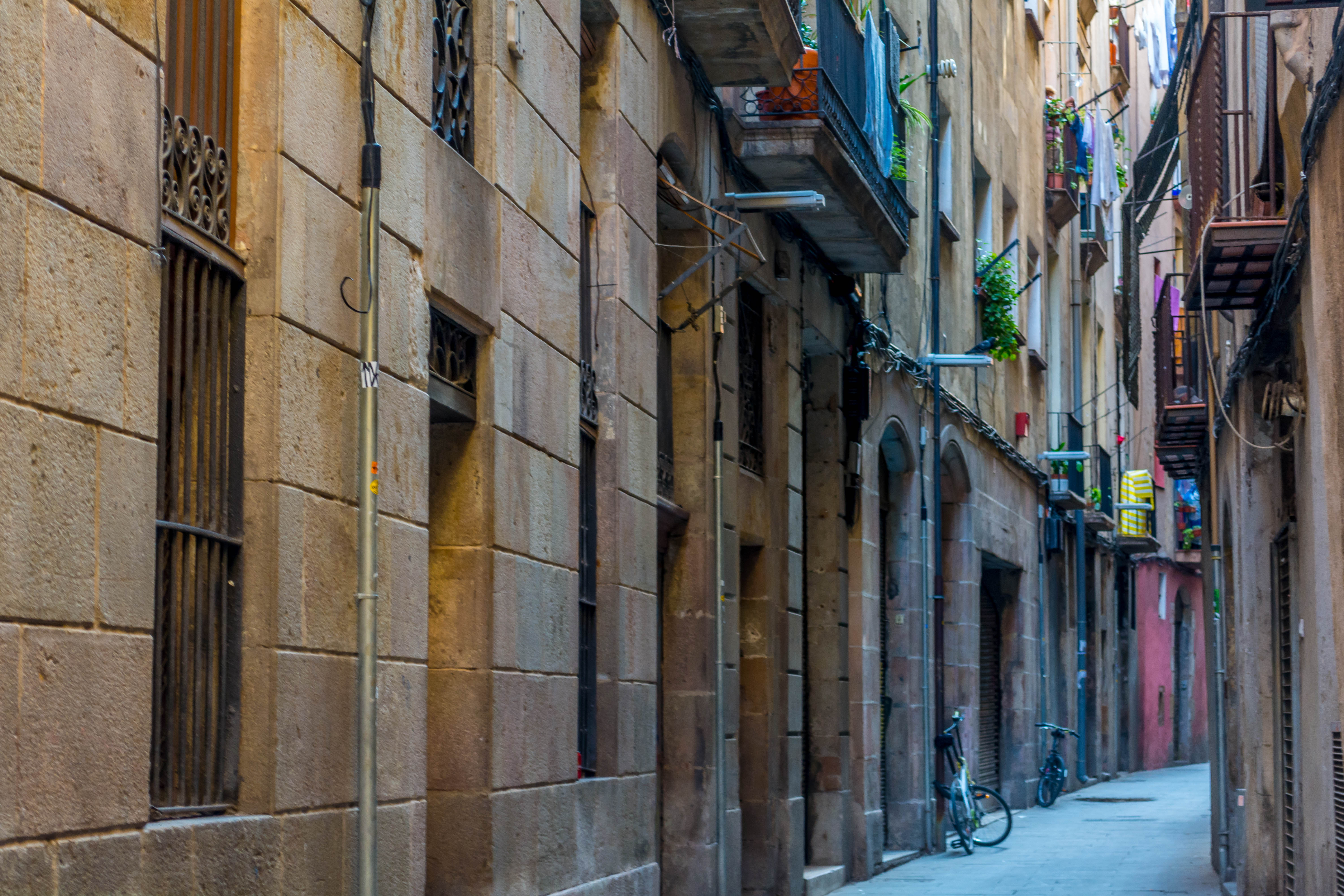 Dear reader, you might be surprised that we are still in Barcelona and this is Day 5 and there is still so much to show you. Well we stayed 9 days in the city and we tried to see and feel as much as we could. The 5th day of our stay was my birthday. It was dedicated to one route from our Guide book. The route included many different accents while some of them were in one part of the city, others on the other.
The first stop of this day’s trip was Parc de Pedralbes which is really nice. It has even a small bamboo alley. We were heading towards the Palace in the park-Palau Reial de Pedralbes which was unfortunately under renovation. The palace was once residence of The Spanish Royal family when they visited Barcelona. The palaces houses three museums and a permanent seat of UfM.
The picture that you see is a fountain at the entrance of the gardens. The gardens themselves were designed and planted by Gaudi. The Carribean-style small palace together with Gothic-style chapel and magnificent gardens were all present from Eusabi Guell to the Royal Family as a thank you for his noble title of Count given to him in 1918. 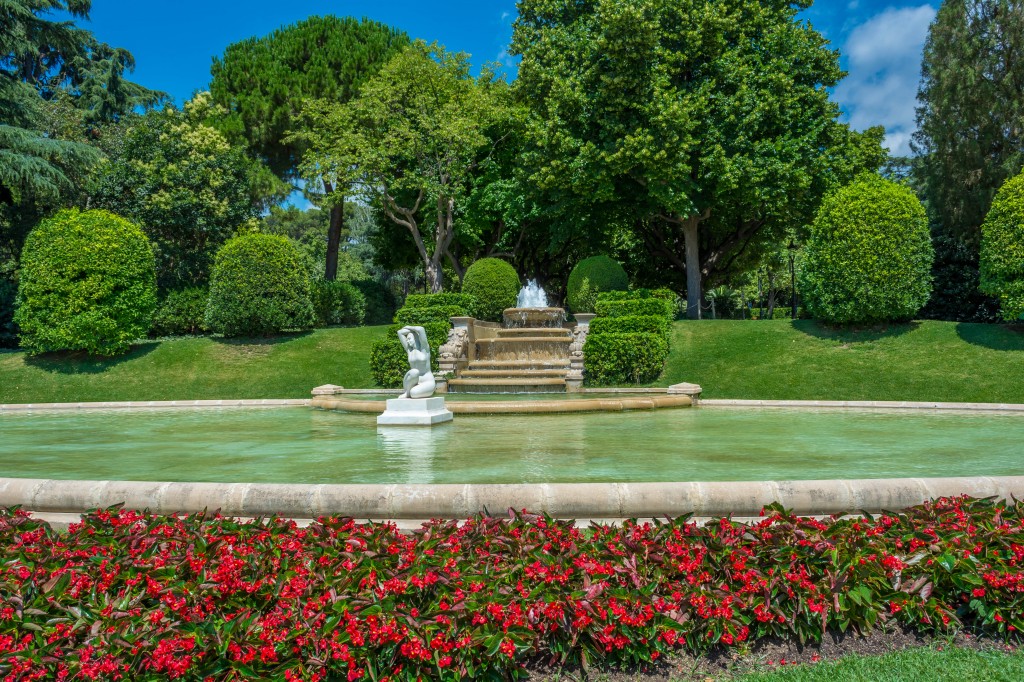 Afterwards we headed towards Finca Guell which is few meters away from the palace, just at the corner. We asked 2 times to find it. We wanted to see it because of the famous yard door it has. The other name of the place is Guell Pavilions. The finca is actually a complex of buildings designed by Gaudi and built between 1884 and 1887.

The picture that you see below is the main gate which I mentioned. It is representing a dragon with glass eyes. The dragon that guarded the Gardens of the Hesperides, which was overcome by Hercules as one of his twelve labors. 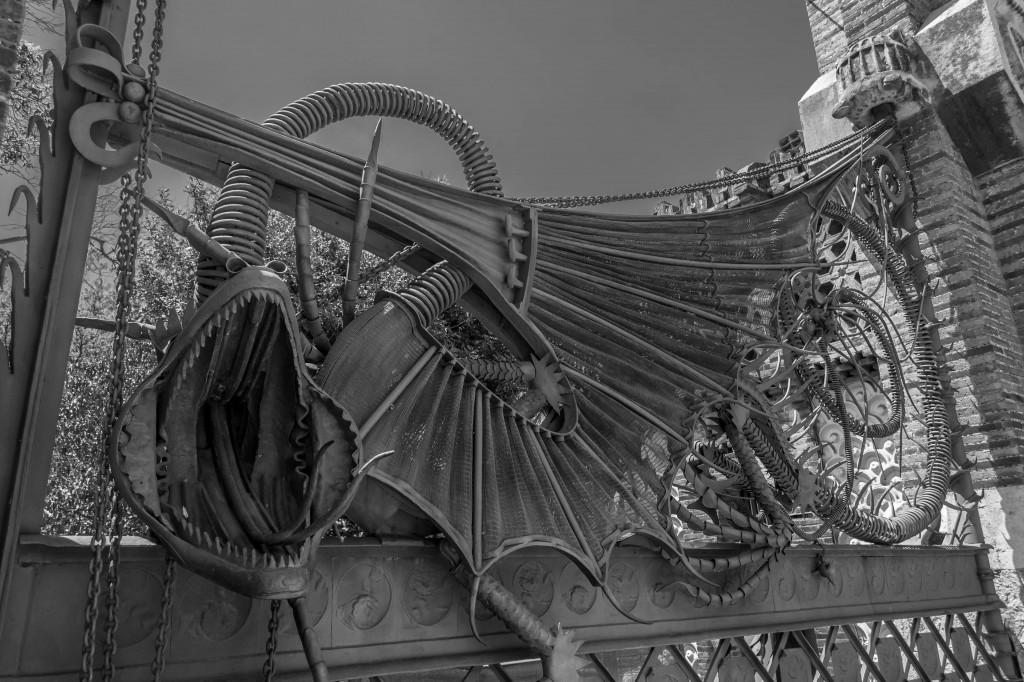 The next picture presents one of the gate pavilions. 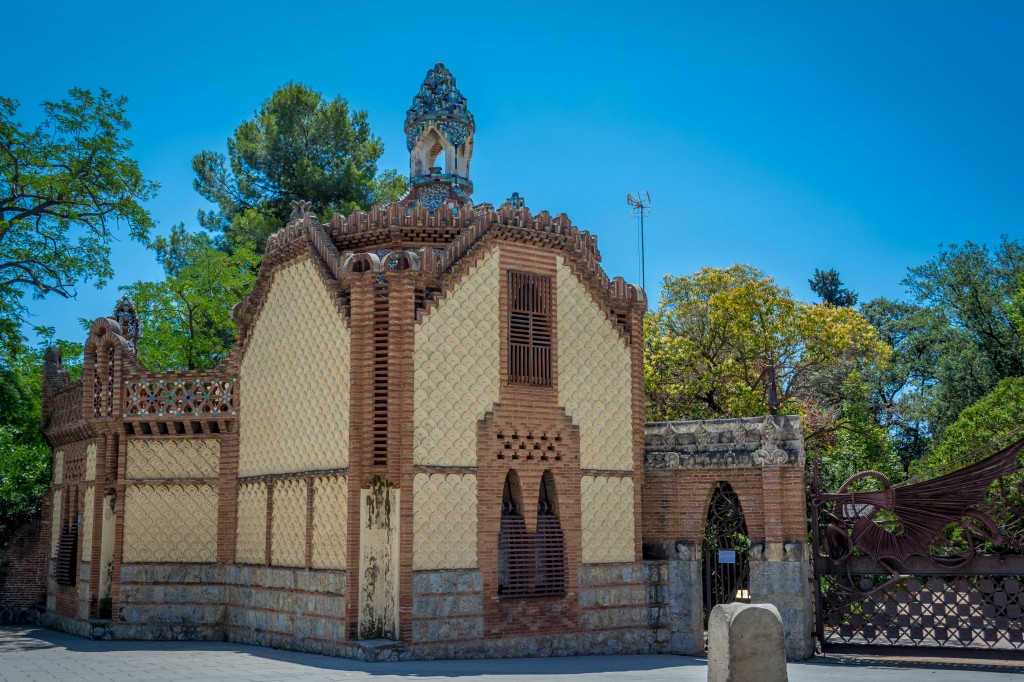 We continued straight the same main street and our next stop was Monasterio de Pedralbes. We passed through one of the fancy neighborhoods of Barcelona. The residential buildings had their own first floor welcoming launge and leather sofas, gardens with turtles and ponds with golden fishes. Some of the buildings were, of course, not that modern but they were well-preserved.

The monastery was founded in 1326 for Elisenda de Montcada, the wife of King James II of Aragon. The queen lived there until her death in 1367 after her husband the king died. A mall number of nuns still reside there. The garden of the monastery is said to have orange trees and palms. The monastery houses collections from Barcelona City’s History Museum. We could not enter in the monastery because we went after working hours. The picture below is the main gate to the surrounding of the monastery and you can see the tower of the monastery at the bottom of the picture. 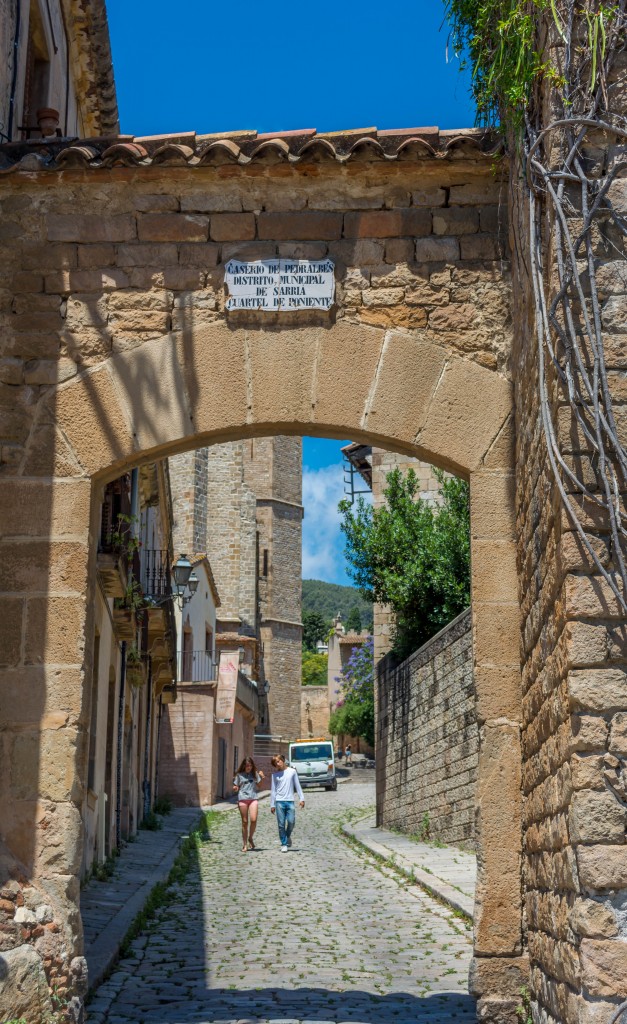 After we were a bit sad not being able to see the inner gardens of the monastery we decided to head off to the city. We took a bus and metro and when we got of the metro we started searching for Casa Vicens designed by Gaudi. It is a family residence and it was added in 2005 to the UNESCO World Heritage Site. It was built in the period of 1883 to 1889. The house is only possible to be visited on 22nd of May but for „neighbors and citizens“. The family of the industrialist Manuel Vicens lived in the house. 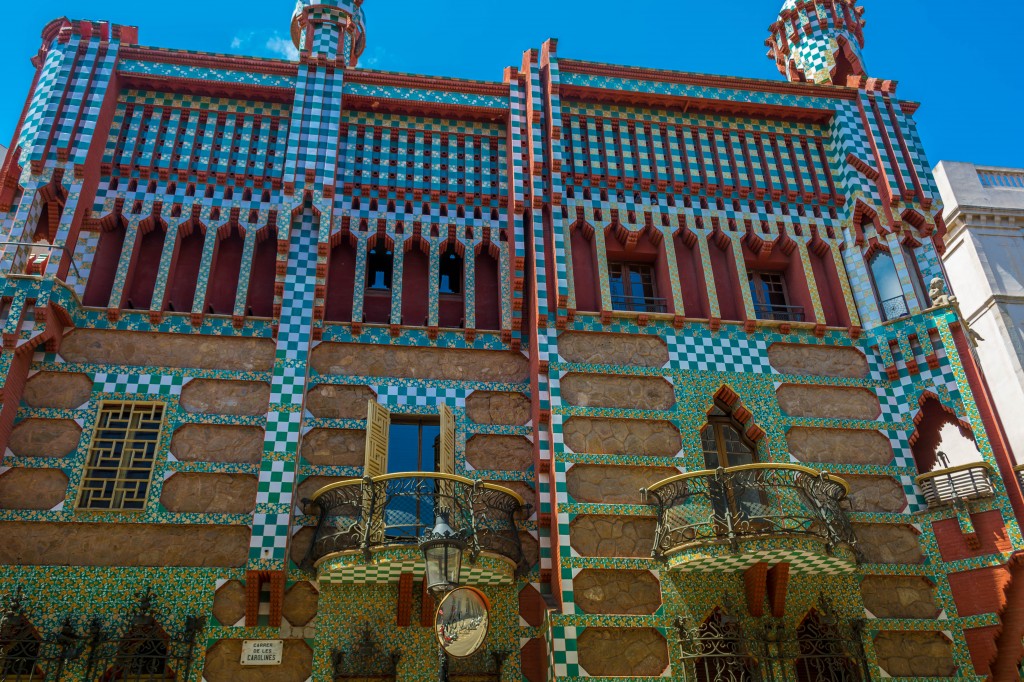 Walking around the same neighborhood in search for a small plaza called Placa de la Vila de Gracia with a clock tower in the middle we stumbled across lots of street art, the pictures were painted on the doors of the shops. 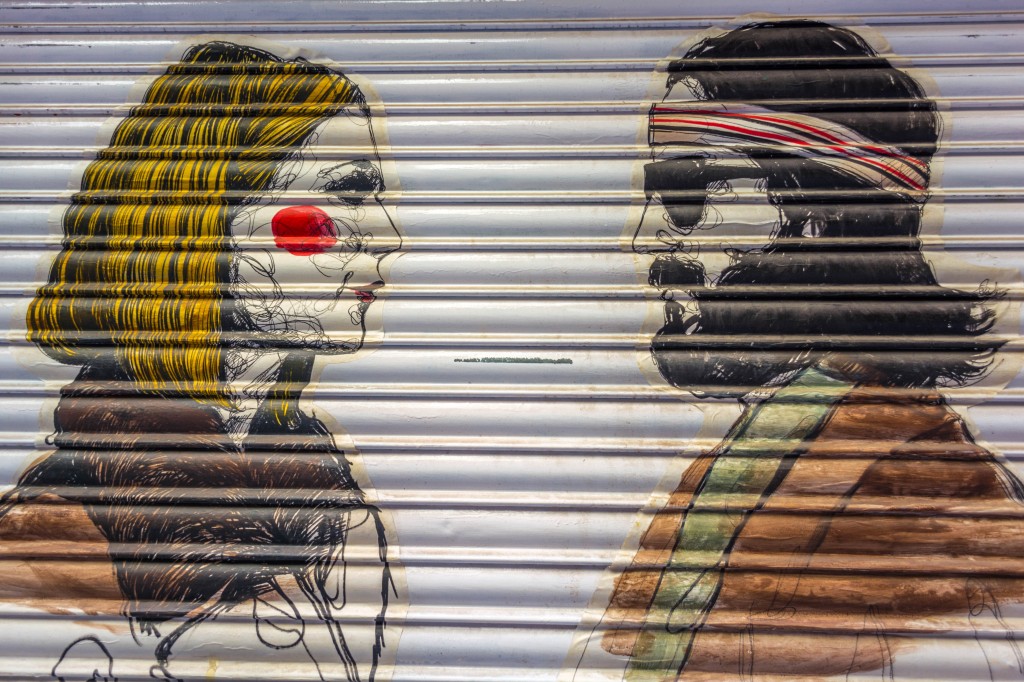 The next two pictures are from the plaza I mentioned earlier. It is a really cosy place with restaurants and cafes. We sat down on one of them but the service was too slow so we decided to grab a beer from the neighboring 24/7 shop and sit down on the shadowed benches around the square. 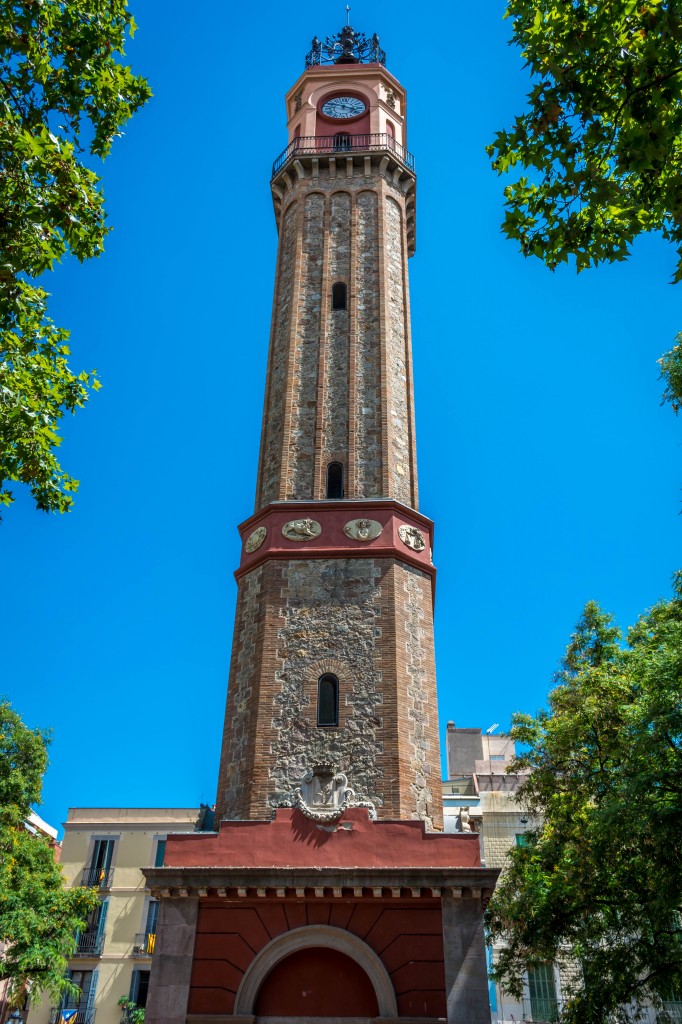 Atmosphere is telling you „no need for rush“. You can sense it in the air. 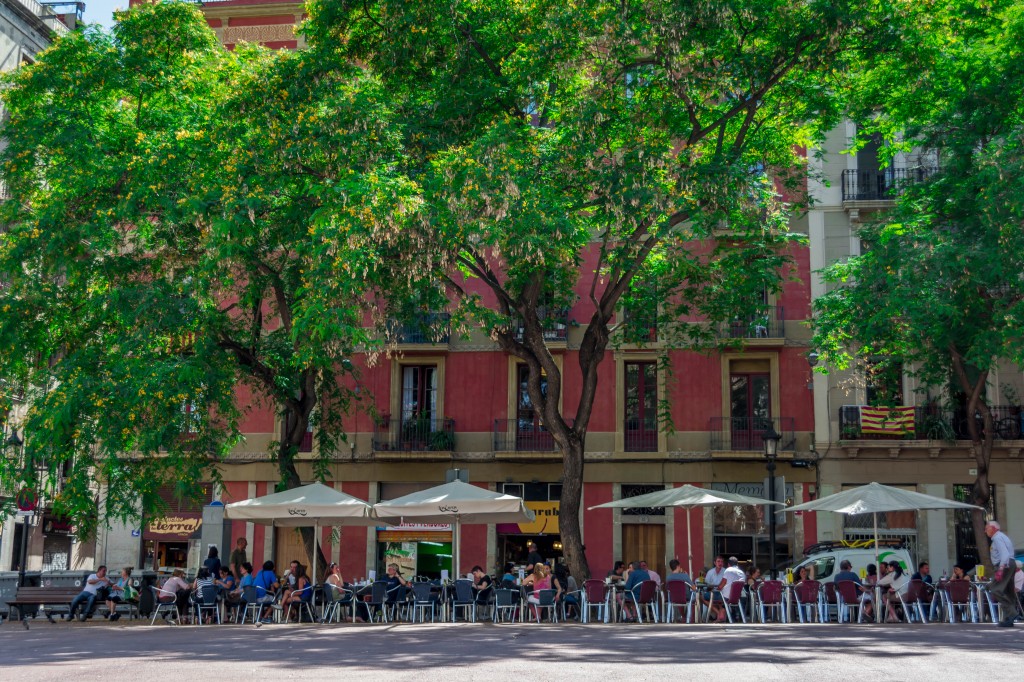 We then headed to the old town. I am very fascinated by the narrow streets. To me this is the biggest charm of Barcelona. 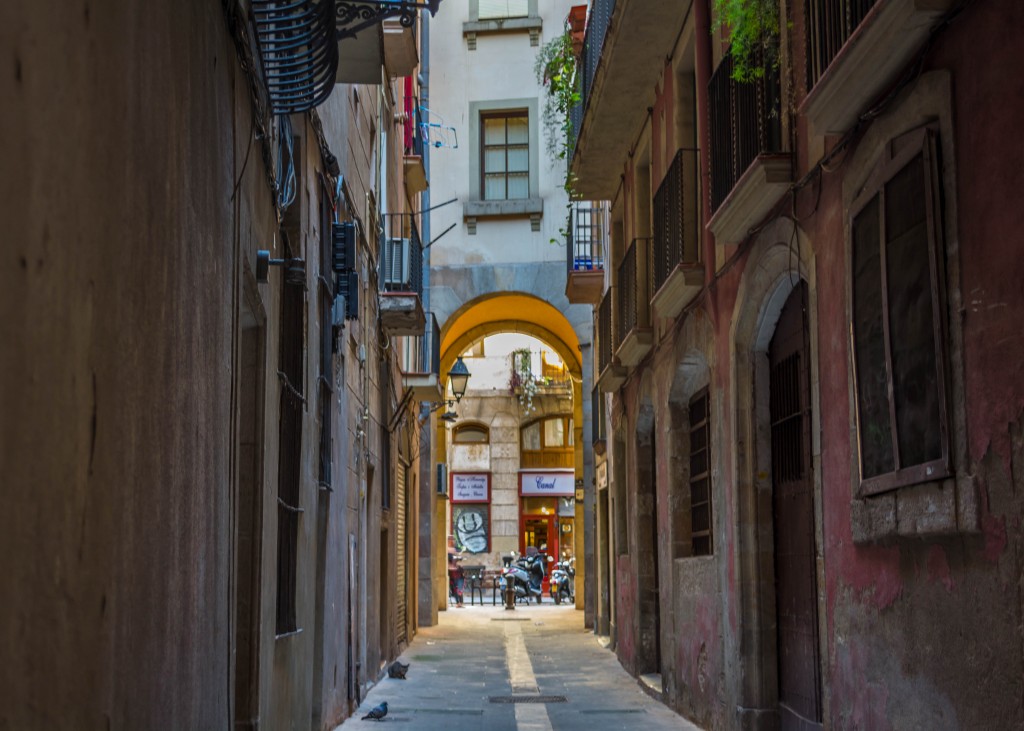 Somewhere in the old city

And few more charms. Have a look on the sign-laughing a? 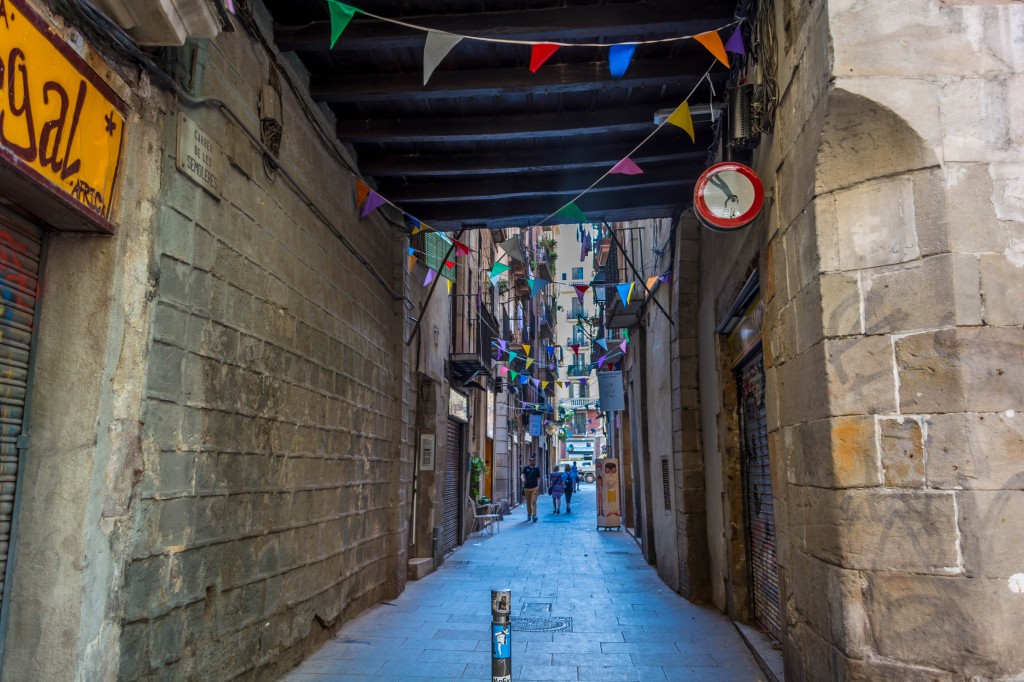 The next picture is a covered market place called Santa Caterina. It is the newest built market in Barcelona. The roof is covered by multicolored ceramics. 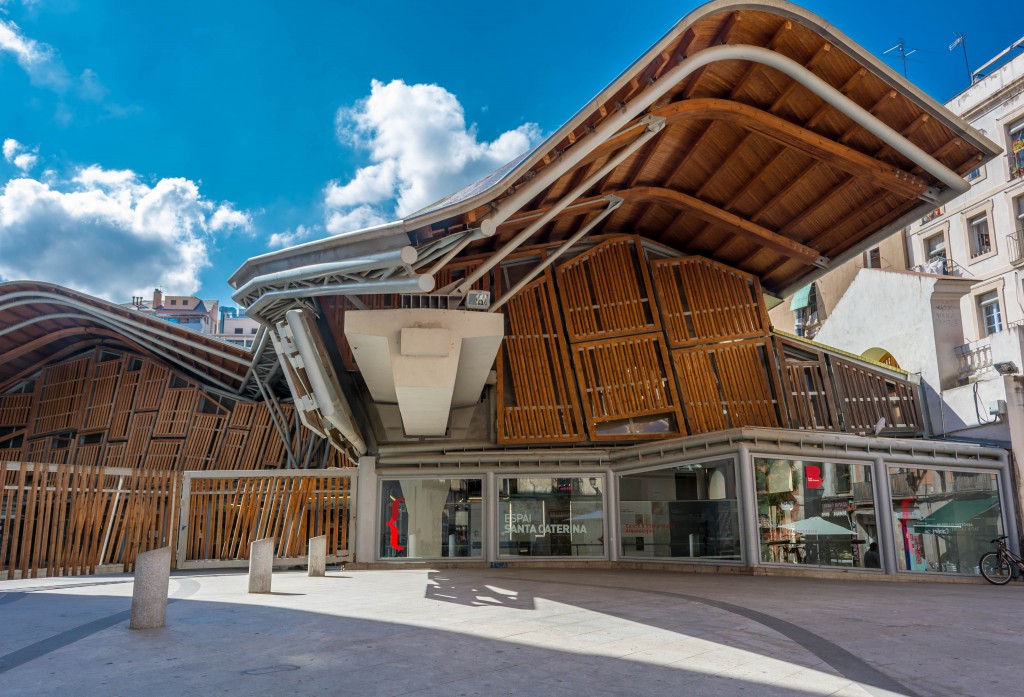 Another gem of beautiful sights. You can always see what your neighbor is up to. I also guess you cannot hide if you make parties and everyone might know what you are cooking, but all is so magical like that, to be close to people, because we are all connected as I like to say. 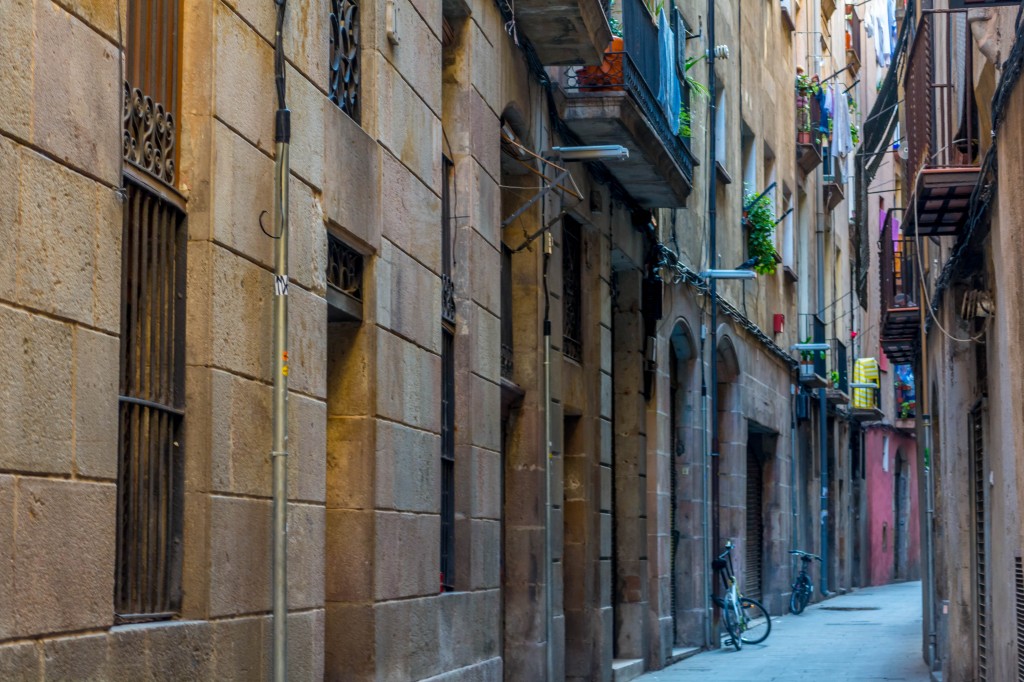 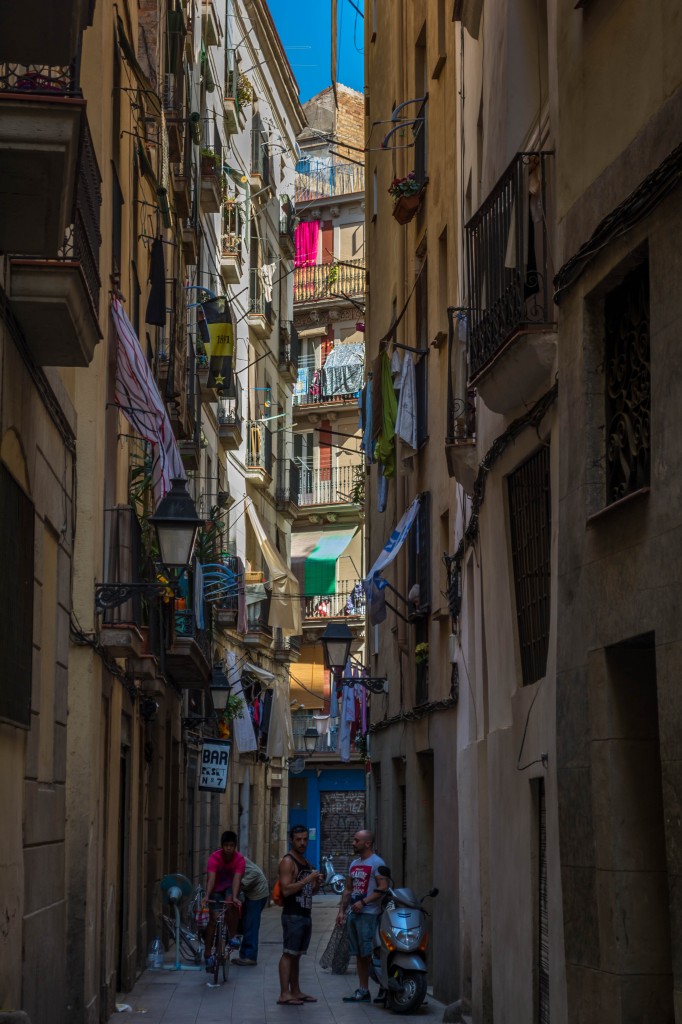 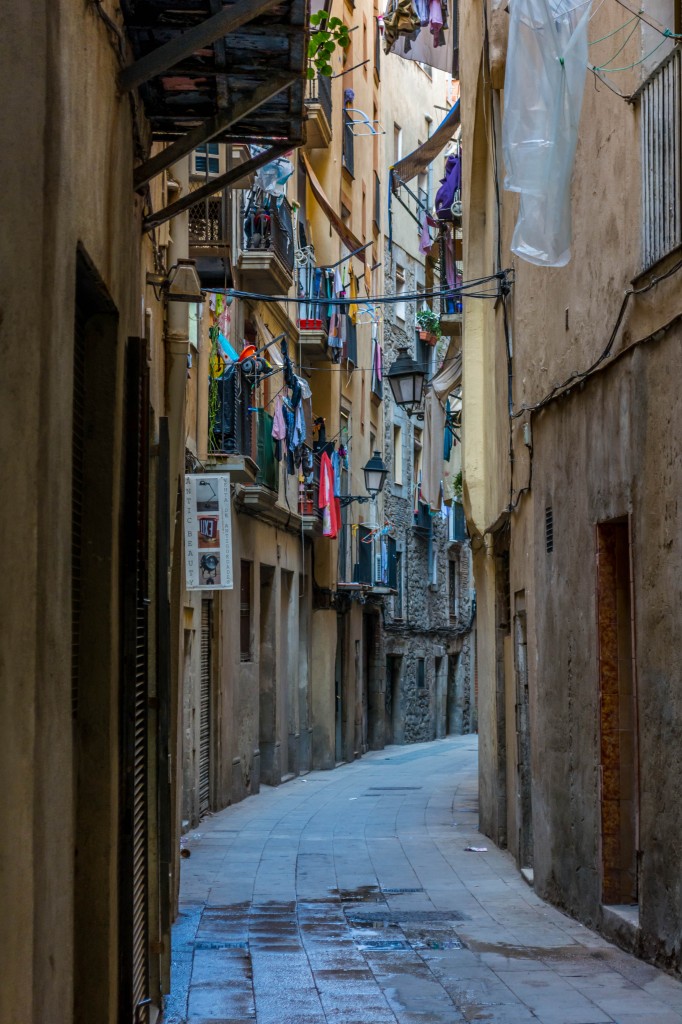 Surprisingly for me we saw lessons for small skateboarders in one small plaza. Have you seen that small extreme sports people, they are just adorable. I am glad I could make that photo. 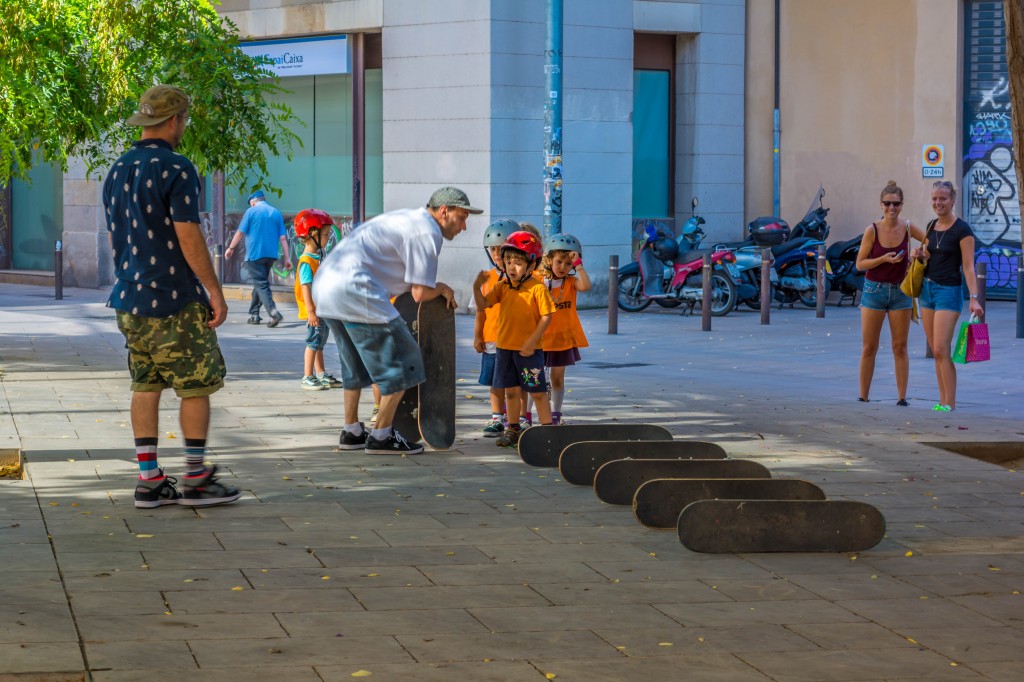 Next to that same small plaza was one interesting cafe or restaurant looking like a Gothic cathedral. Unfortunately I do not remember the name and I cannot use street view on the map for that area so we have just the photo of it. 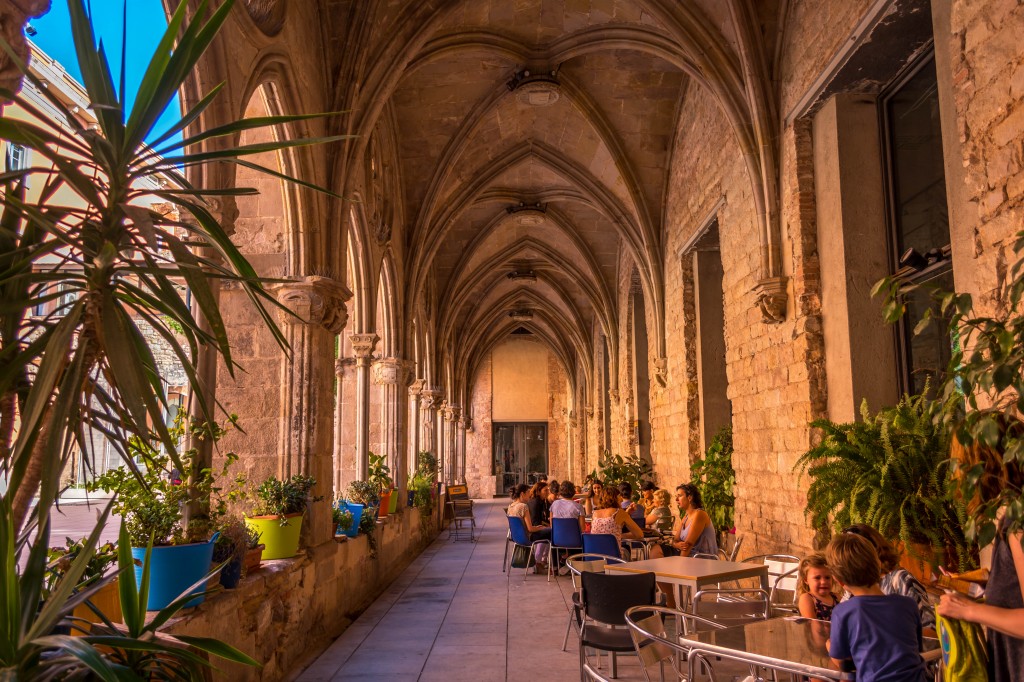 Next to the restaurant I noticed beautiful terrace gardens that I thought one must see once in their life. 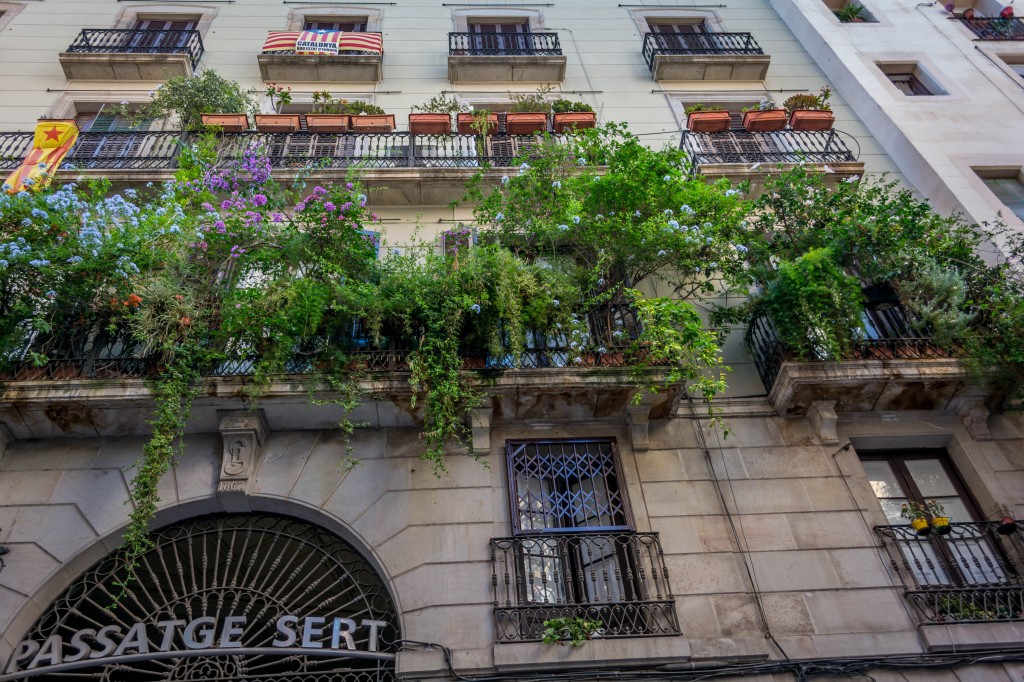 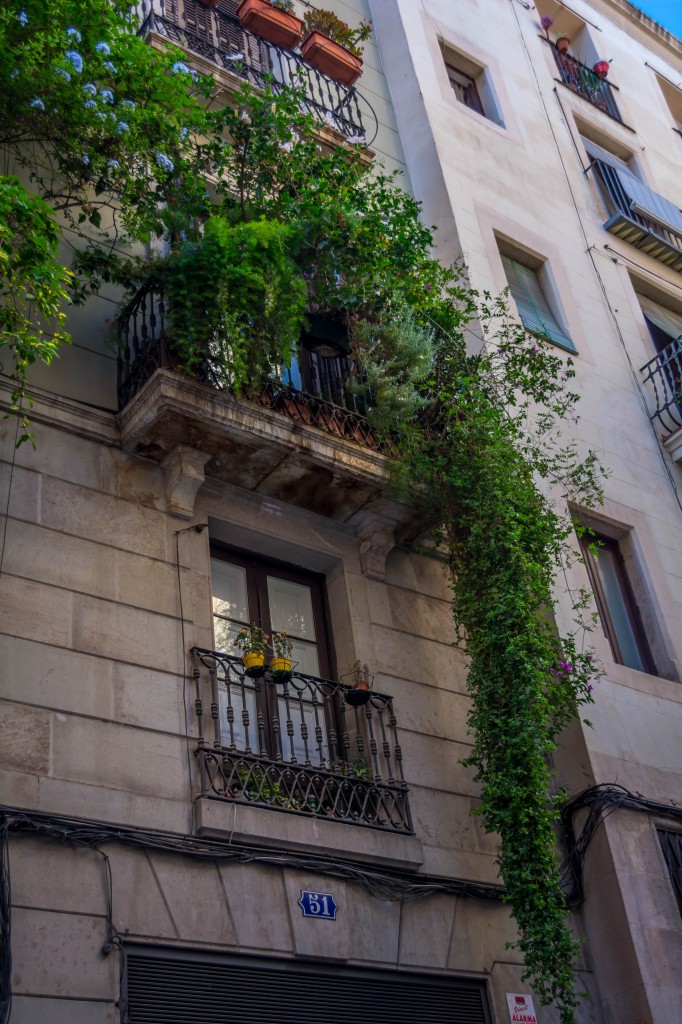 And last 2 photos of this post are of Palau de Musica Catalana which is amazing building from outside, but even more amazing from inside. That is the reason why we will visit Barcelona one more time at least. One of the most famous things to see in Barcelona, the palace is designed by Luis Domenech i Montaner and built between 1905 and 1908. The palace is declared as UNESCO site since 1997. Today more than half a million people each year attend musical performances in the Palau. 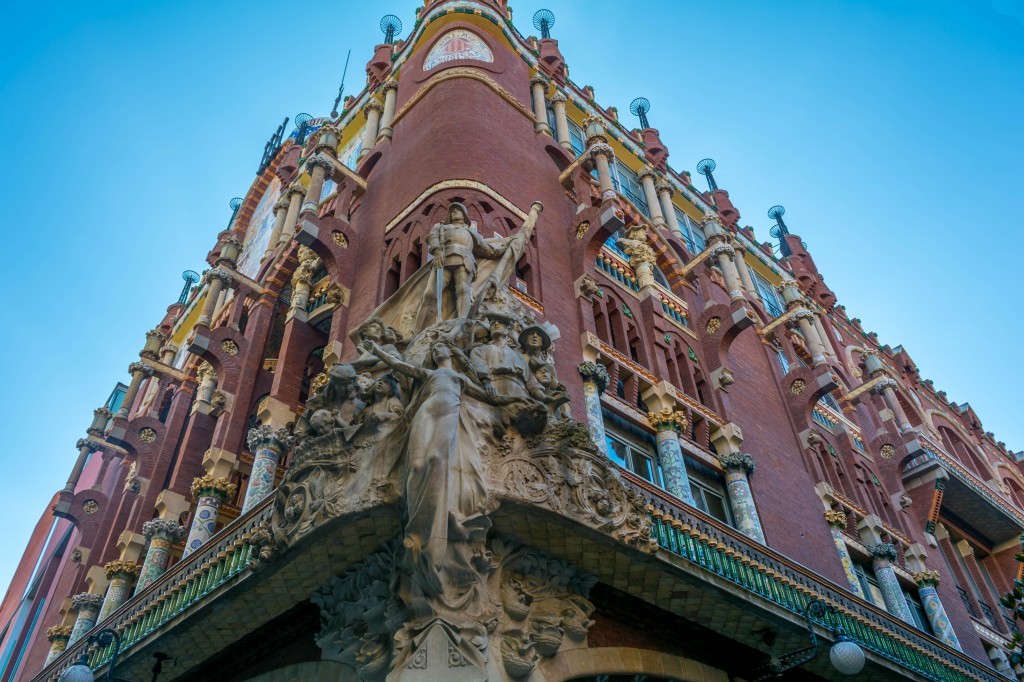 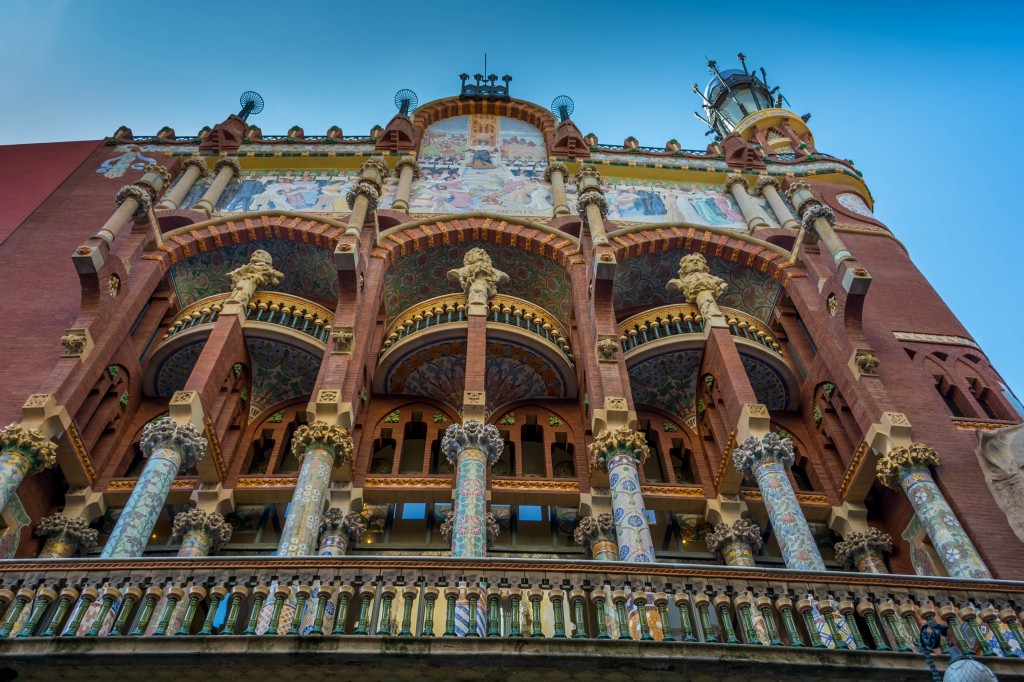 We had one or two days of rest and then we continued our city exploration. More pictures to come.