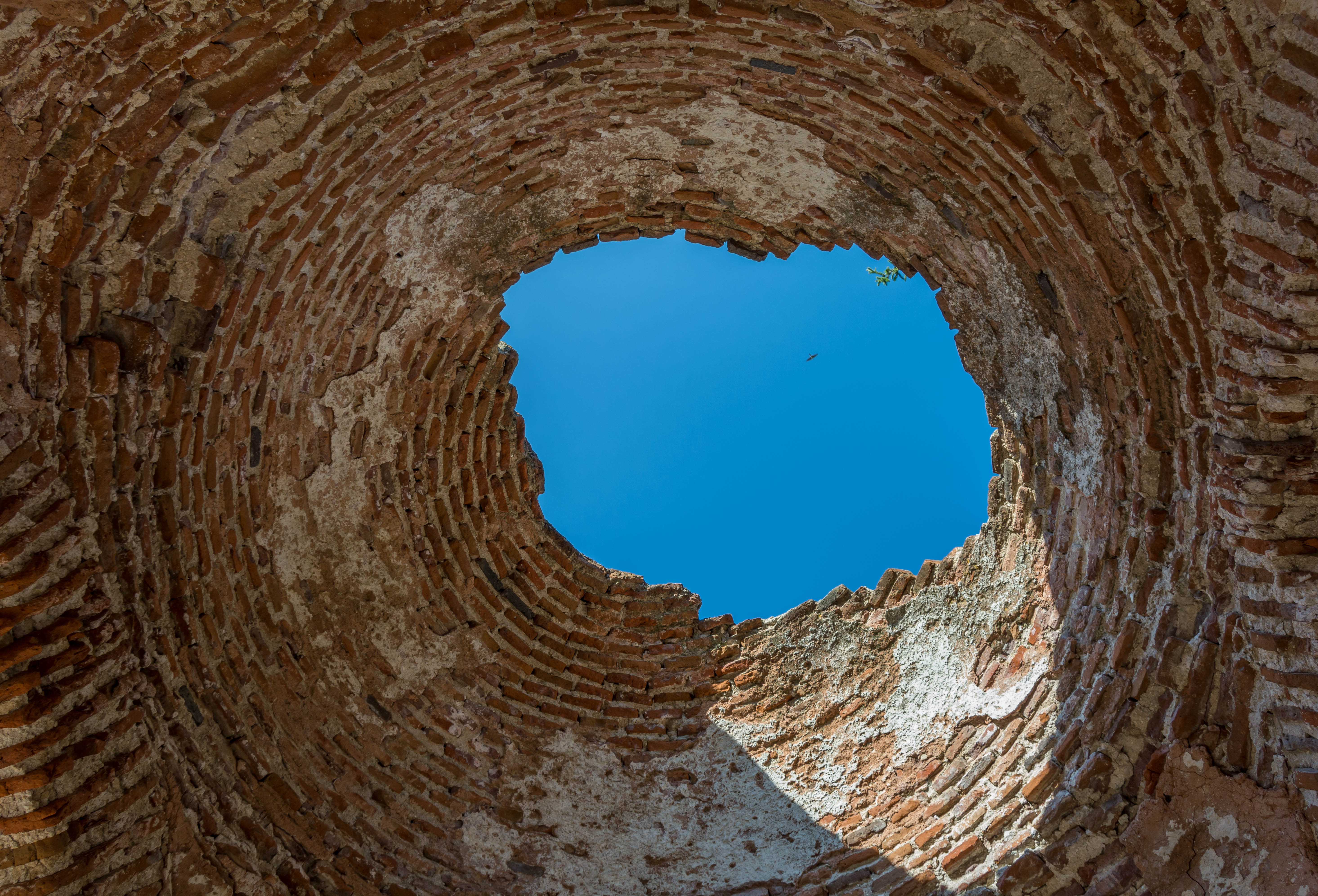 After seeing Shipka monument and cathedral, we headed to Kazanlak, where we had rest in one family hotel.

Kazanlak is a town in central Bulgaria and the center of the Rose Valley. The city is the location of the largest and best preserved Thracian tomb in the country included in the list of UNESCO and the Rose Museum. Nearby is the ancient city of Seuthopolis and the Valley of the Kings.

This is why the first attraction we decided to visit was the Thracian tomb. The original of the Thracian tomb dates from IV-III century BC. It has a special mode of preserving, this is why visitors are not allowed to enter inside it. Few meters next to it is a copy of the tomb, which is 1:1 representation of the original. It shows the architecture, artifacts and murals of the tomb. The tomb is one of the most significant monument of the Thracian culture on Bulgarian lands. In its architectural plan it belongs to the tomb typical of the burial architecture of Thrace from the end of V until the beginning of the III B.C. The tomb is located in southern part of the mound and it comprises the three chambers required by the Thracian cult of the dead: an antechamber for the chariot, horses, or slaves which accompanied the dead man in the after-life; a corridor (dromos), which was a small room for the things needed in the after-life; and a burial chamber for the body itself.

The murals are the chief asset of the Kazanlak Tomb, because they are the only entirely preserved work of Hellenistic art that has been found in exactly the state in which it was originally designed and executed.

When we visited the copy of the tomb, we were not allowed to make photos inside. I presume it is because of the significant historical value which the murals have. This is the other reason why we did not spend a lot of time inside the tomb. The park where the original and copy tombs are located, is a good place for a walk. Here are few pictures of the original tomb which is closed for visitors. 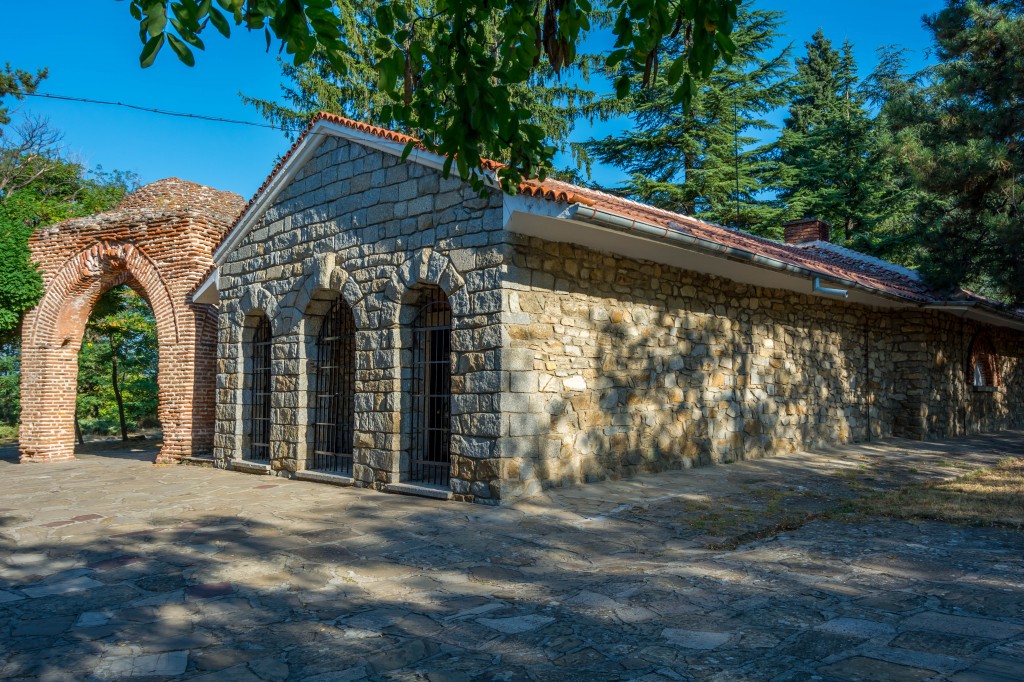 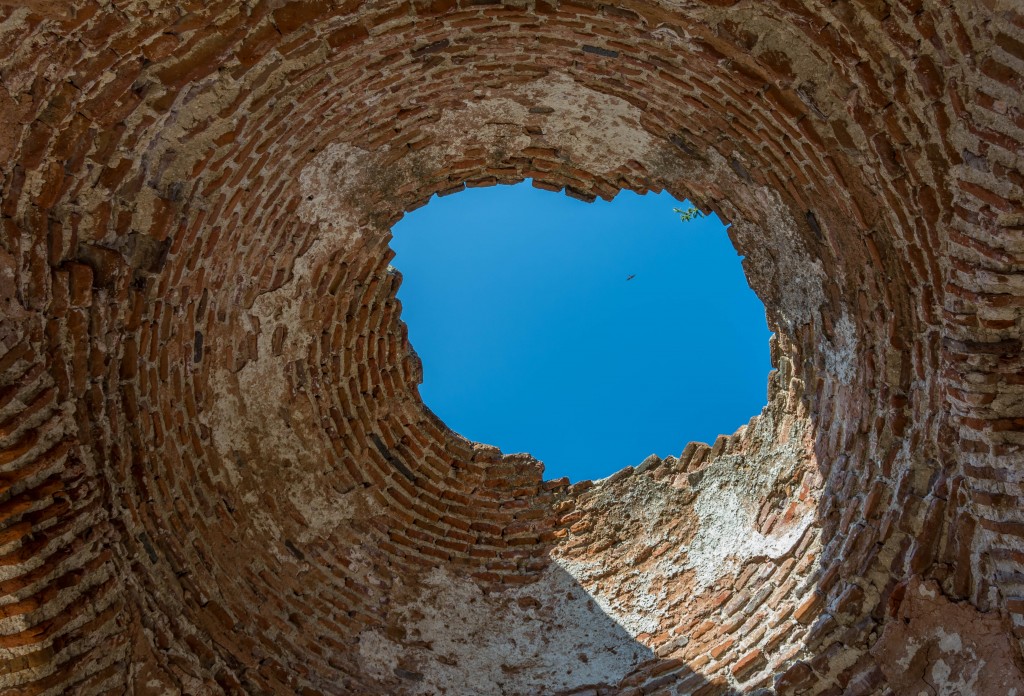 After we saw the tomb, we headed towards one of the many narrow and sweet streets of the city and saw a Violin workshop place. I was naughty enough to look through the window, when one man saw me and invited us in their workshop place. They were two and were just working on making two new hand-made violins. I created another post in honor of their work. We spent more than 3 hours talking to the two craftsmen.

After our sweet talk with the violin producers, we headed towards one wonderful church. It had really well-decorated garden. It was the cathedral of „St. Prophet Elijah“ which was built around 1812. It was the first Orthodox church in Kazanlak. Not to irritate the Turkish leaders its roof was the only part which was over the surface and to reach the inside hall one had to walk on an underground staircase with 12 stairs.  When the number of Bulgarians in the oldest neighborhood of Kazanlak – Kulenska – increased significantly, the small underground church became too small and it was decided to build a new church on its place. The new construction was led by Master Joseph and the church was ready in 1865. The church had a 5-meter dome with 12 windows and almost two-meter iron cross. In the following years the icons were painted by the famous Renaissance artist Georgi Danchov – „the icon painter“ and  on December 30, 1872 Metropolitan Ilarion Makariopolski led the church´s inauguration. 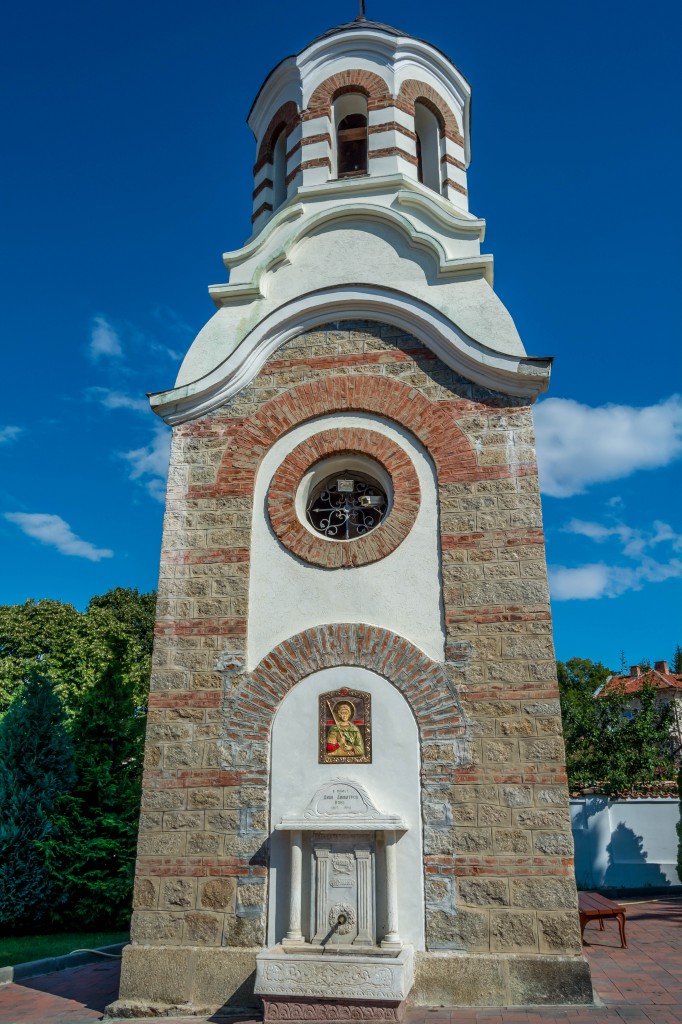 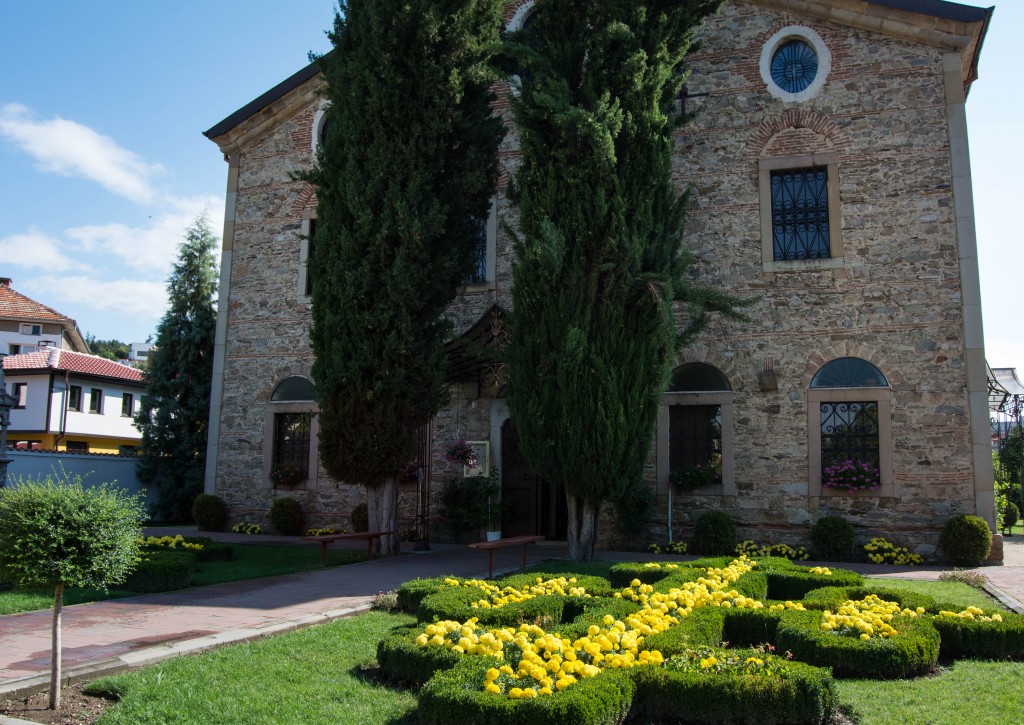 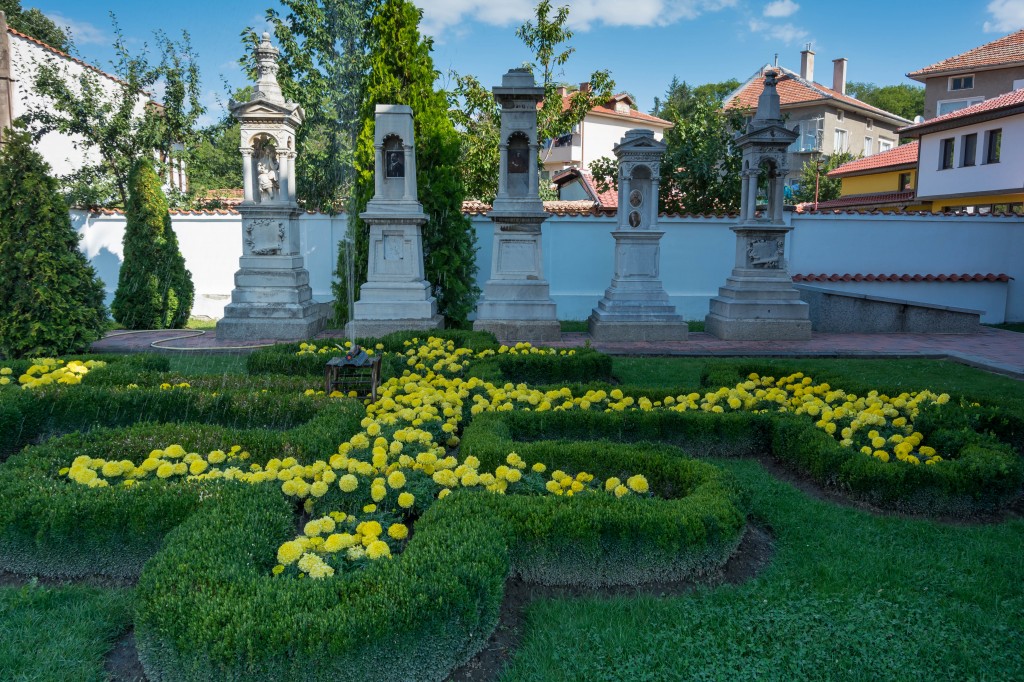 Kazanlak is not only the place of Thracian history, but the born city of several of the most talented and famous Bulgarian painters. One can visit their homes and also their works in the Art Gallery of Kazanluk. Kazanlak is famous as a city of artists. Here are born many artists, some of which marked one of the highest peaks in Bulgarian art, as Petko Klisurov, Ivan Milev, Ivan Penkov, Dechko Uzunov, Nenko Balkanski, Vasil Barakov, Mara Yosifova and others. Therefore it is no coincidence that Kazanlak has one of the oldest and richest galleries in the country.

While walking out of the „St. Prophet Elijah“ cathedral´s gardens, we met one girl who kindly asked us if we were tourists and obviously due to the cameras hanging on our necks, we were 🙂 She asked if we already visited the houses of Dechko Uzunov and Nenko Balkanski, which we didn´t so she guided us to them. Actually she was the tour guide who opens the houses for visitors. She tells about the painters´ lives and gives some details on their works if you have questions. She was very kind. Below you can see the two houses of these great Bulgarian painters. 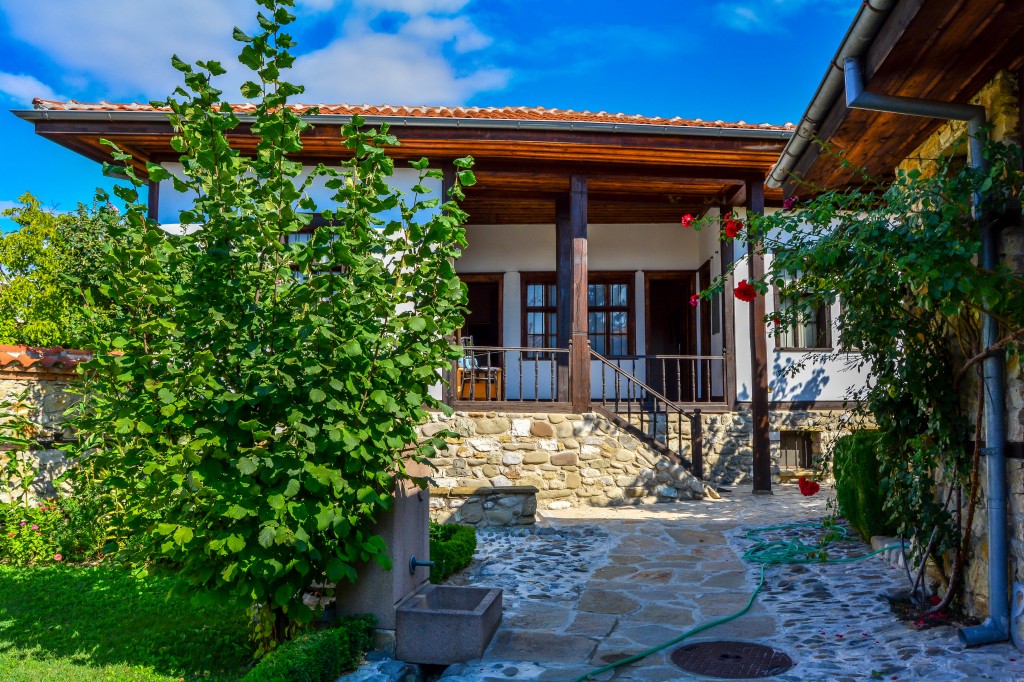 Academic Dechko Uzunov was born in Kazanlak on 22. 02. 1899 at 35 years became professor of fine and decorative arts at the Art Academy in Sofia, member of the Bulgarian Academy of Sciences; 1976 was elected President of the International Association for Plastic Arts at UNESCO-agar; 1982 was elected a member of the European Academy of Science and Arts.

The exhibition is located in the restored house and home place of the academic in a specially built for exhibition purposes showroom. The house shows 21 paintings from different creative periods, donated by the artist’s wife Olga Uzunova and 4 other Dechko Uzunov’s works donated by the artist nephews Atanas and Hristo Neikovi in ​​memory of their parents.

The next picture you see is the house of Nenko Balkanski. 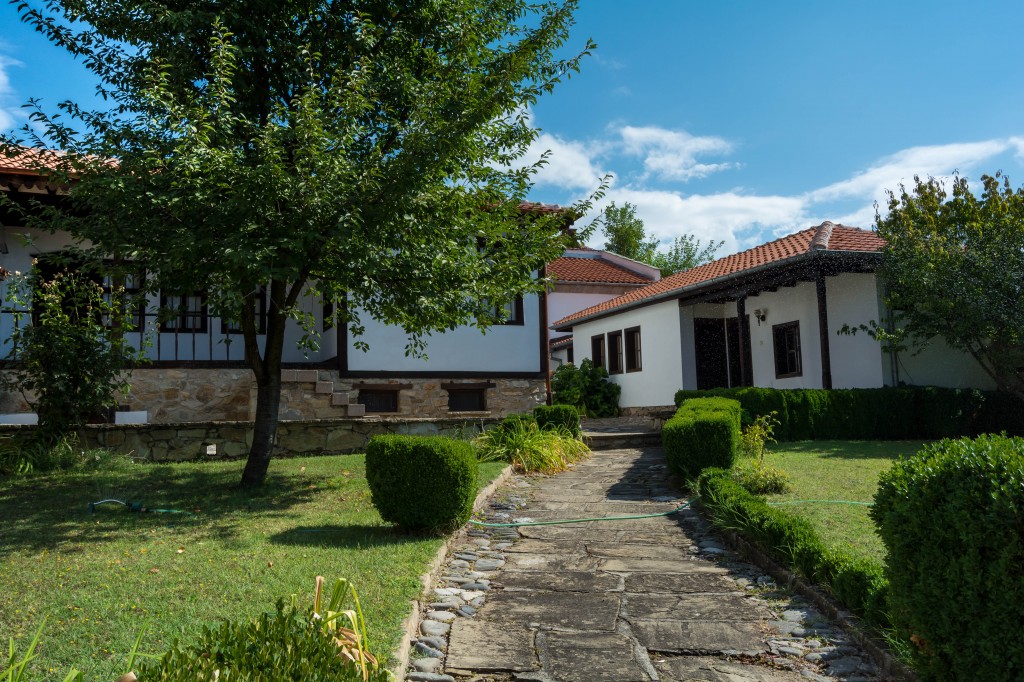 After the death of Professor Nenko Balkans in 1977, in his desire to promote his enormous contribution to the artistic culture of Bulgaria, Kazanlak municipal government restored his native house. In 1981, his wife Liliana Balkanska donated 267 paintings and 1271 graphics and drawings of her husband to the Art Gallery in Kazanlak. Follows the construction of an exhibition hall in the restored house and in 1991 the house-exhibition of  „Professor. Nenko Balkan „is opened for visitors.

Nenko Balkanski was born in Kazanlak on September 20, 1907. The exhibition contains a selection of his wife´s donation and is located in three rooms of the house, showing 13 works related to home and family, and on the ground floor – 38 paintings and drawings . In the showroom you can see 55 works of Nenko Balkanski from different creative periods.

We passionately recommend you to see these masterpieces of these two painters. We were totally fascinated not only by their art and life, but by the warm and welcoming guiding of our tour guide. People from Kazanlak are very welcoming and kind. After all, it is in their Balkan character 🙂

One of the attractions which you must see in Kazanlak is the Historical-ethnographic complex „Tower“ which was built in the oldest part of Kazanlak. There are located many restored architectural and historical monuments of the Renaissance era. The complex „Tower“ is located around the oldest street „Prince Sviatopolk Mirsky,“ which is located in the oldest neighborhood also called „Tower“. In October 1976 in two restored houses one can see ethnographic exhibitions that show urban and rural life of the middle class people of the Kazanlak region by the end of the XIX century. The restored interior shows the transition from traditional rural to urban life, when the European way of life and culture influenced the lives of Kazanlak people, which in turn is related to the trade of rose oil around the world. 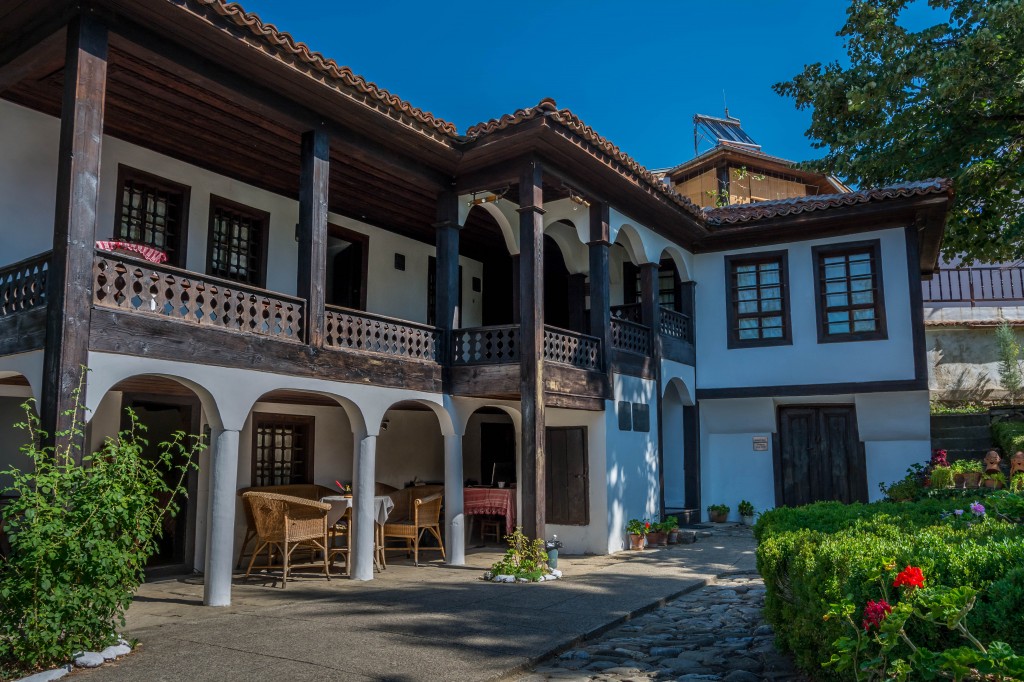 Visitors can see under a shed how a basic rose-distillery looks like. The rustic house is typical for the sub-Balkan villages – asymmetrical architecture typical for the late XVIII and early XIX century. The rich collection of furniture and objects in the two houses of the complex reflects the traditional lifestyle of the population of Kazanlak. Under the second shed diverse inventory used for the cultivation of land is exposed. The courtyards of the both houses are designed with cobblestone paths and typical flowers, evergreen bushes and trees. Near the ethnographic complex there is a stand, which offers the best quality products from Rose and other essential crops. 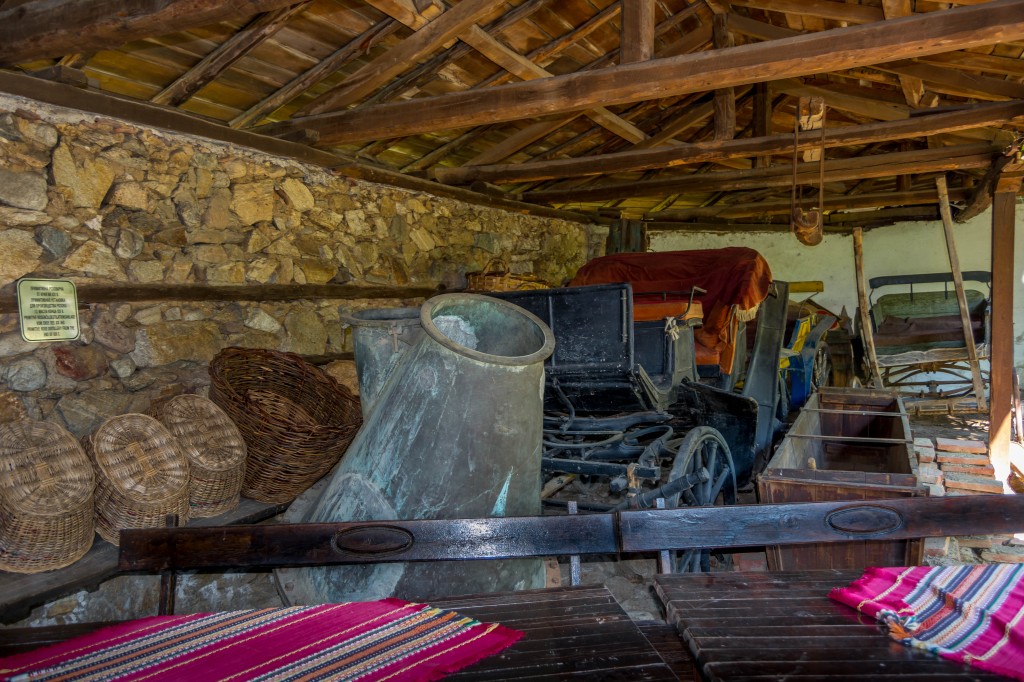 When one goes to visit this wonderful museum he can try Bulgarian rose jam and rose liqueur. They taste great. You will not forget their taste for long time, I guarantee you. 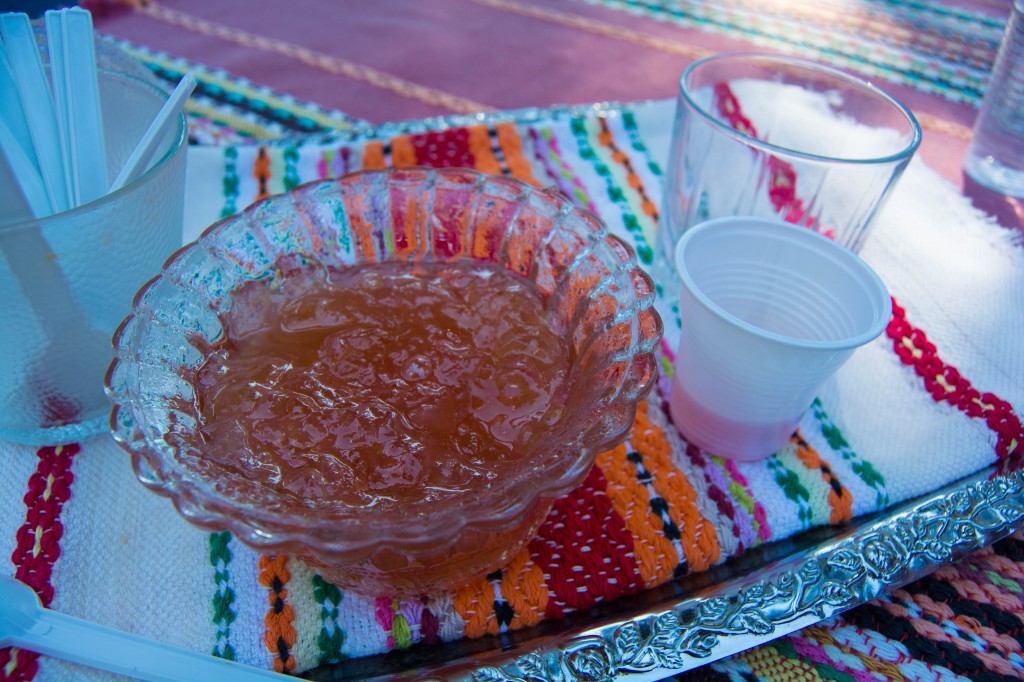 In Kazanlak is the only museum in the world dedicated to oilseed plant rose. Rose is one of the symbols of Bulgaria. Today the Rose Museum stores over 15,000 exhibits related to rose-picking and rose production from all over Bulgaria. Today, because of its high quality, Bulgarian rose oil is among the most preferred materials by French perfumers.

Today rose-picking is one of the most important events in the Rose Valley of Bulgaria, which is accompanied by many celebrations. Every year the Rose Festival takes place. It is one of the most attractive festivals in Bulgaria. The Rose Festival is celebrated for the first time in 1903 and since then traditionally held the first weekend of June. This is the period during which the oilseed Kazanlak rose blossoms. The event attracts thousands of guests in Kazanlak and is associated with many events – rose picking demonstrations, demonstrations of rose-distillery, the International Folklore Festival, a festive procession and crowning of the Queen of Rose.

We hope you enjoyed this trip to Kazanlak.