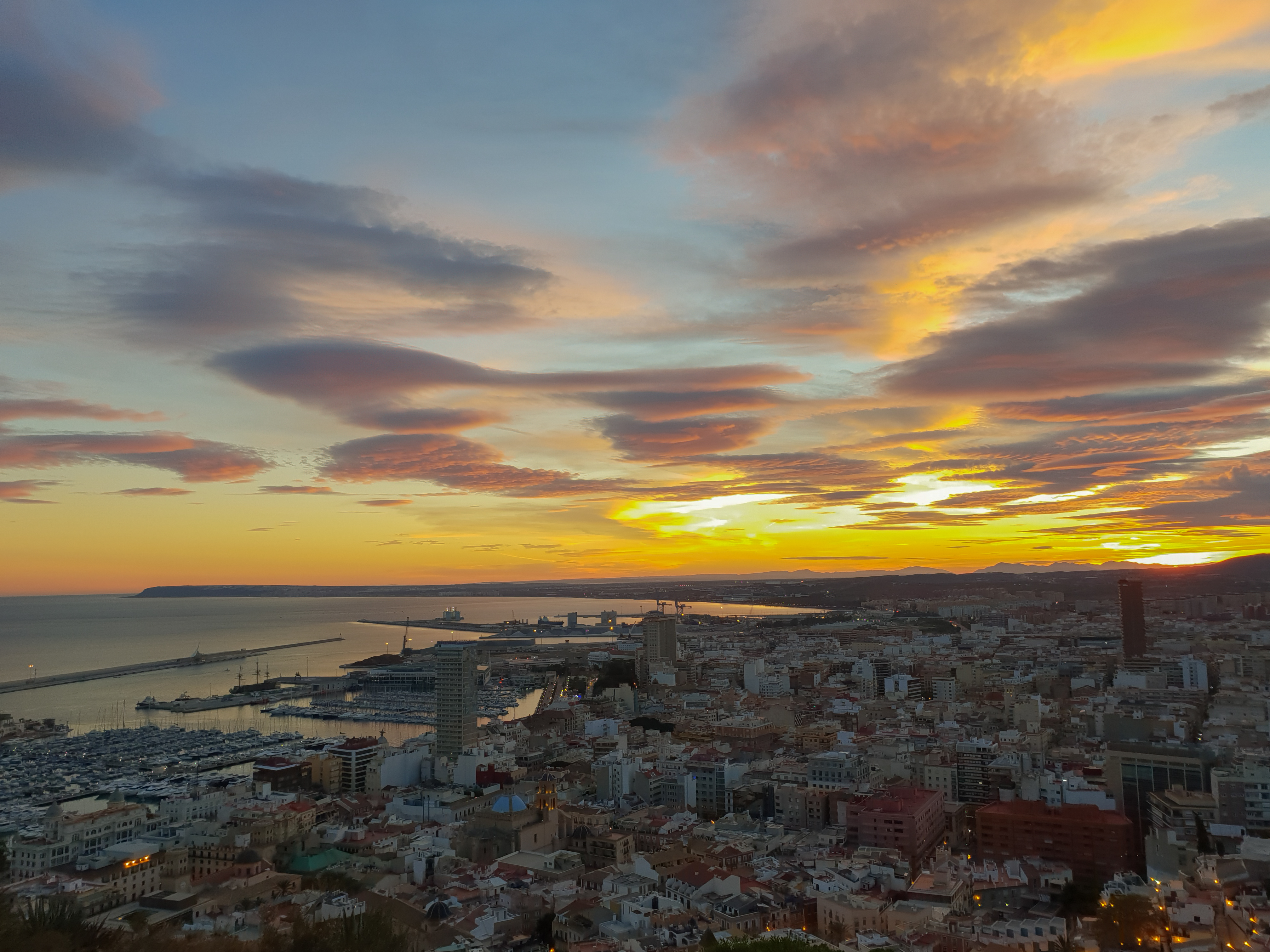 In the dark winter months of Denmark, i present to your attention the port city of Alicante. It is part of Valencia Community, on Costa Blanca with about 330.000 inhabitants. You can easily guess what made us go there-the sun. The city has mild climate without high temperature variations.The winters are warm and the summers are hot. There is not so much of rainfall and cold months are considered to be September and October. There are only 35 rainy days yearly in Alicante. Can you imagine? 😀 I did not know that before we booked the trip in December, but we managed to catch fantastic weather.

The average sea water temperature is 20 C. To get to the city from the airport you will need a taxi, especially if you arrive late. The prices are reasonable. You will most probably not need public transport while staying in Alicante. The port, promenade, gardens, old town, city centre and main square, the fortress, the municipal market, all these you can visit by walk and i recommend you to do this 🙂

Little history:
At fist Alicante was a settlement established sometime in mid-230 BC by Carthaginian general, but the area around Alicante has been inhabited for over 7000 years. The area and the settlement were ruled by the Romans for 700 years, and the Goths for 300 more, then the Arabs ruled from 8th to 13th century, when in 1247 it was finally taken by the Castilian king Alfonso X, who passed the rule to the Kingdom of Valencia in 1296. Once a thriving Mediterranean port  for export of olive oil, oranges, wool, wine and rice, the city fell in a long decline during 18th and 19th centuries.
Nowadays the port is place of anchoring cruising ships more than an industrial one, being replaced by the Valencia port. The city’s economy is mainly based upon tourism and real estate. Wine production, agriculture, administration and services also play part in the local development and economy of the city.

We contributed to the tourism sector obviously 😀

Highlights of the city:

The most famous attraction of the city is the Caste of Santa Barbara, built in the 9th century by the Muslims to control the Iberian peninsula. It was named Saint Barbara as it was regained on her’s feast day by the Castilian forces led by Alfonso.The military role of the castle seized during 18th century and it was later used as a prison. It was opened to the public again in 1963 after a period of abandonment.  The castle stands on the Mount of Benacantil 166m above sea level, it offers nice views over the city and the port. Your perfect spot for selfies 😀 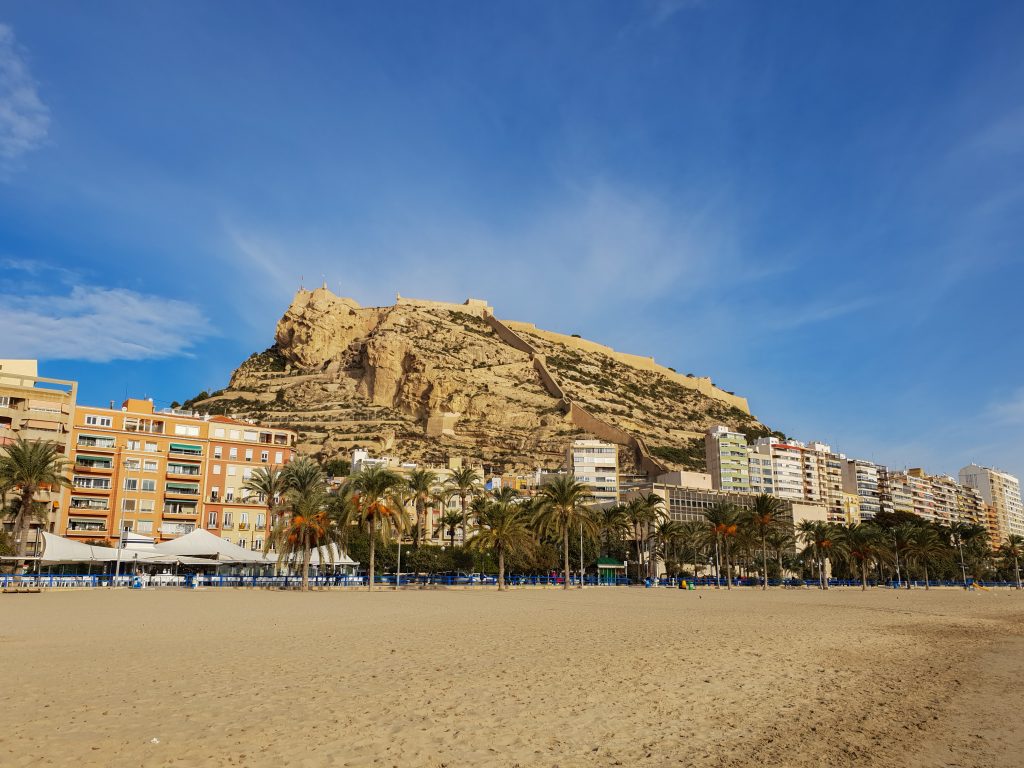 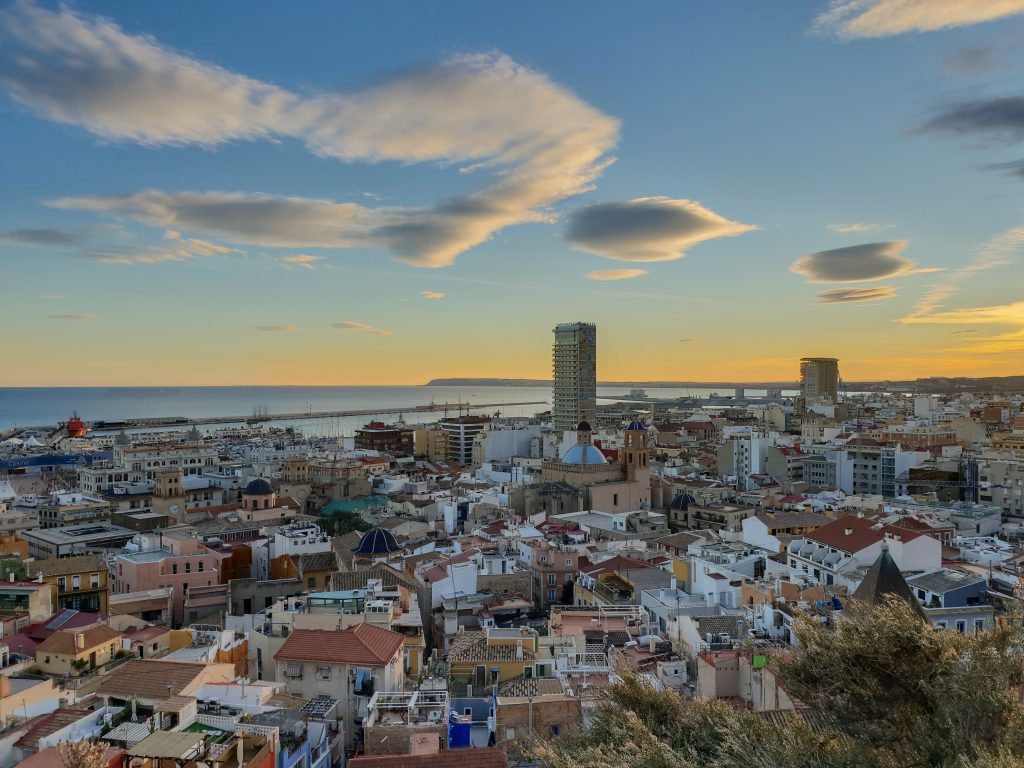 View from the panoramic landing we stayed at on our way to the fortress. 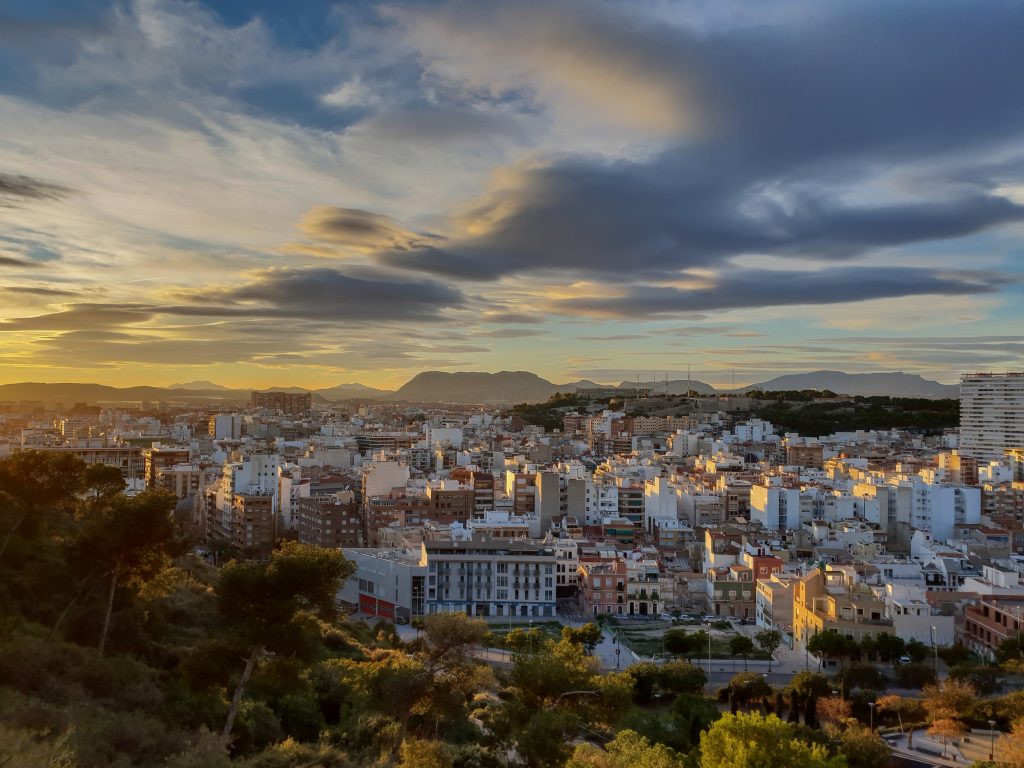 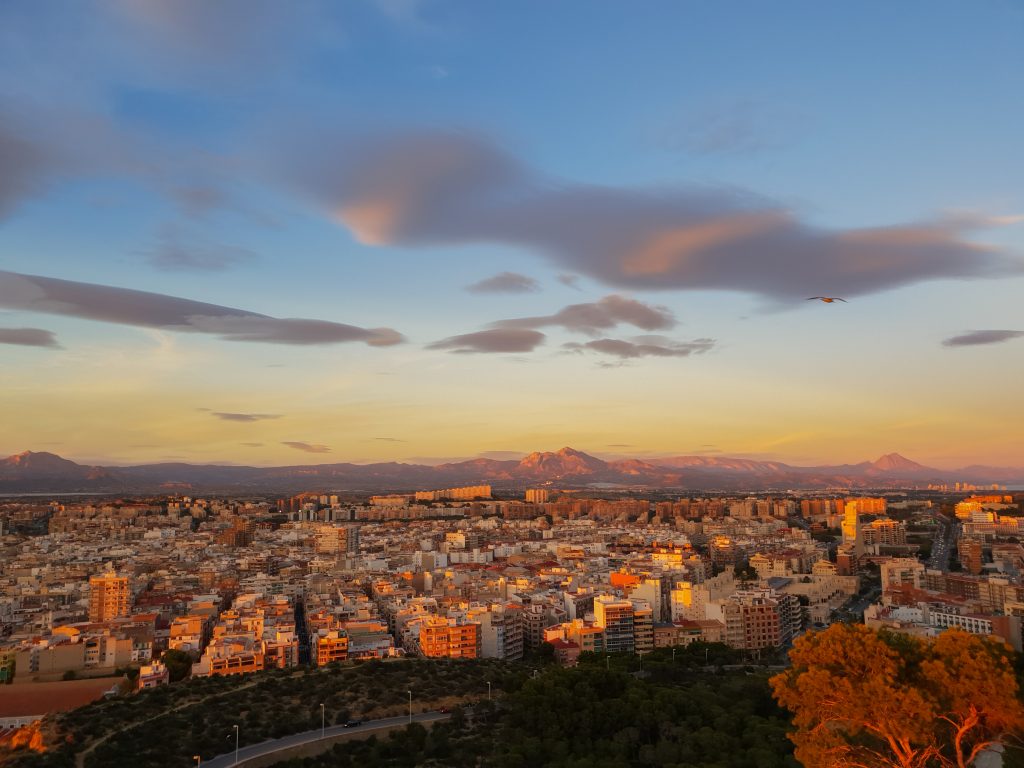 The above photo is view over the city and the mountain hills are part of national park Sierra del Maigmo. 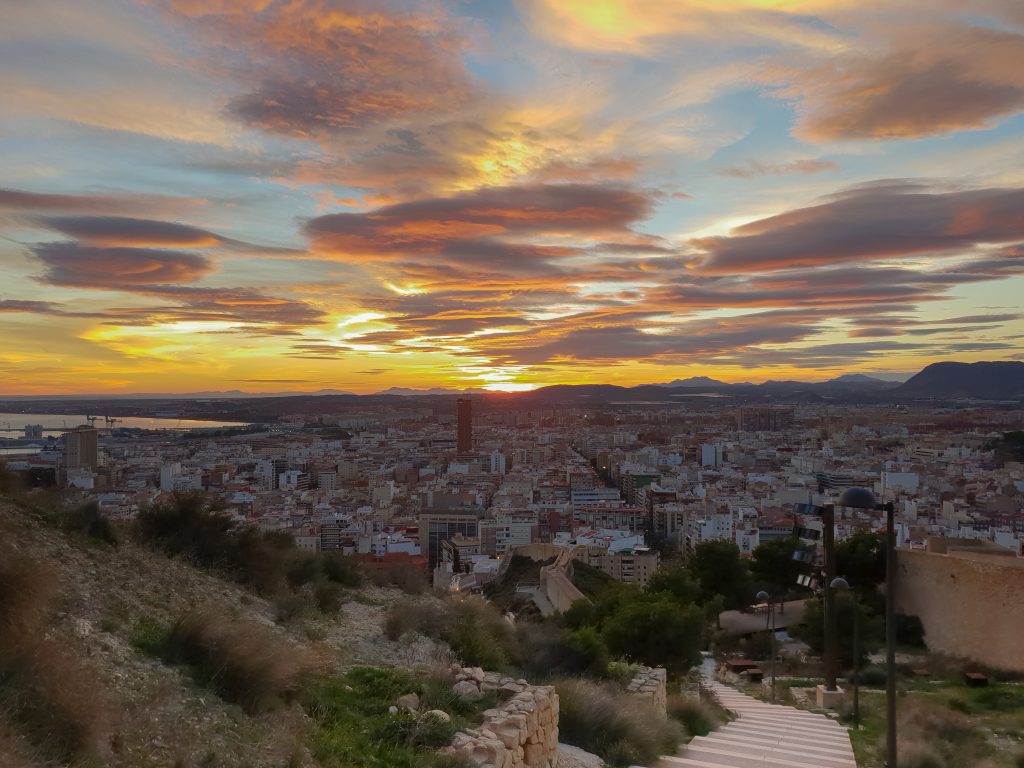 View from one of the fortress’s entrances.

On our second day of our stay in Alicante we walked through the little neighbourhood of Santa Cruz. It is a charming part of Alicante, where you will witness the typical narrow streets and small houses with many plant pots and cute street gardens. 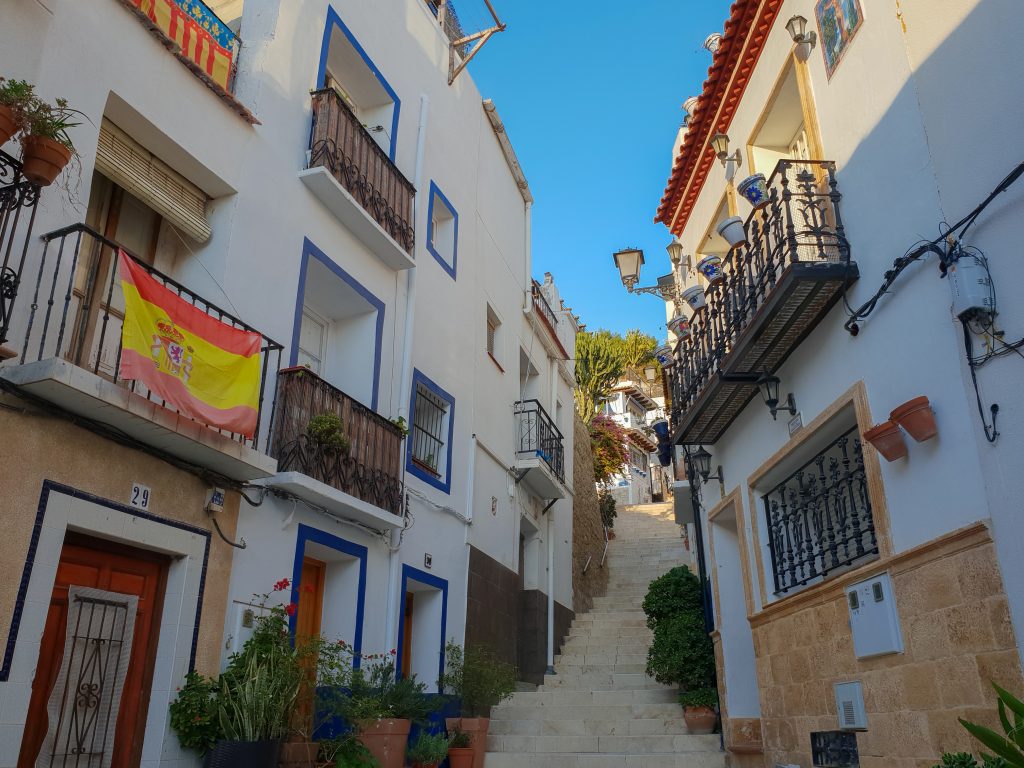 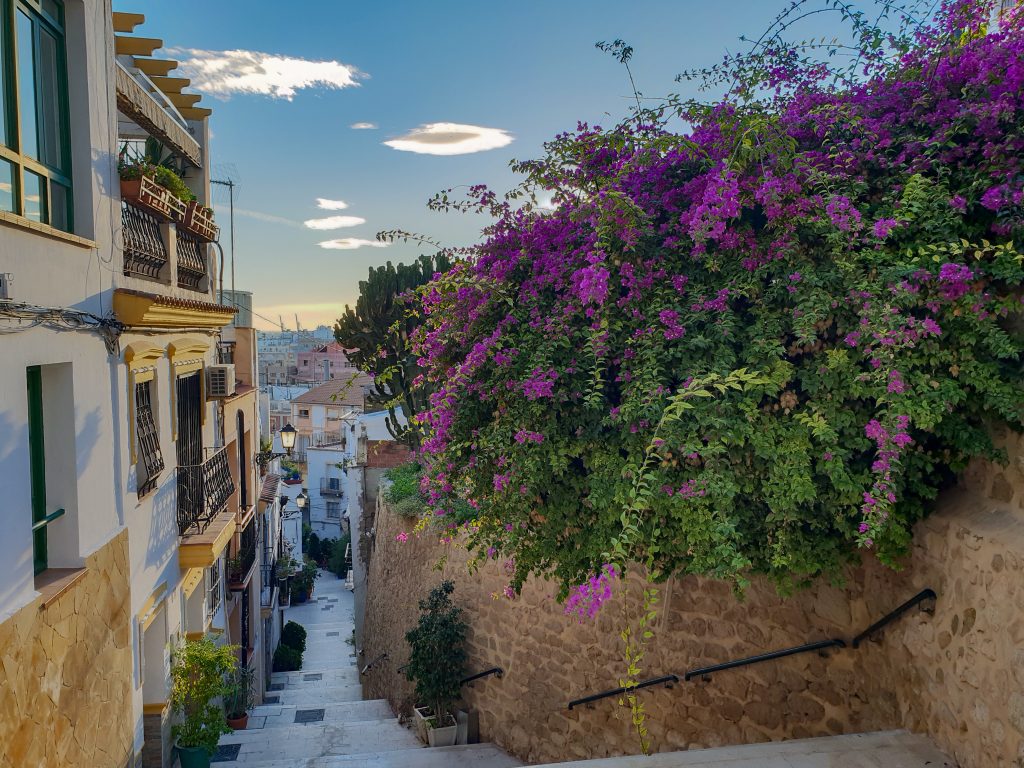 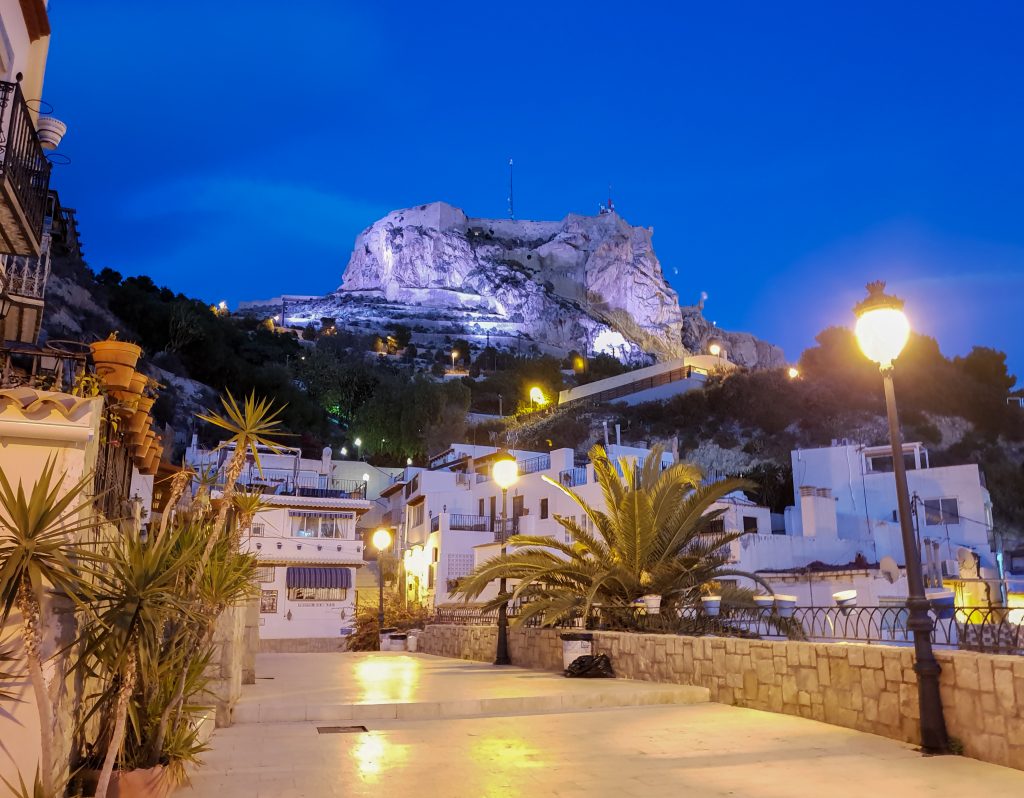 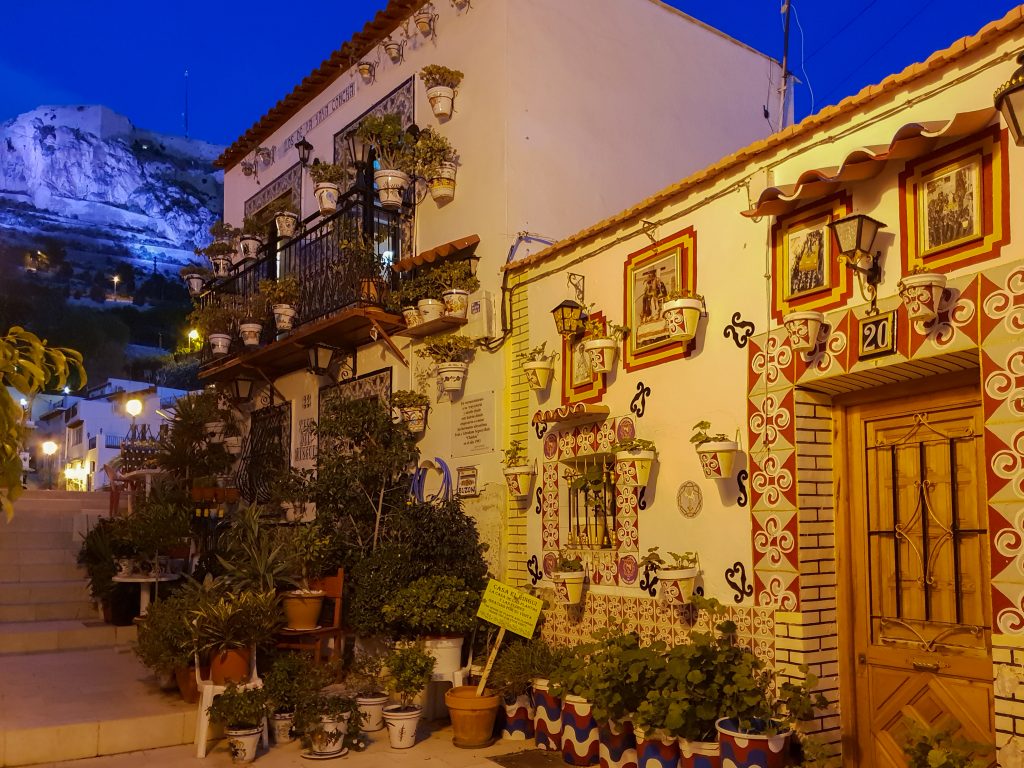 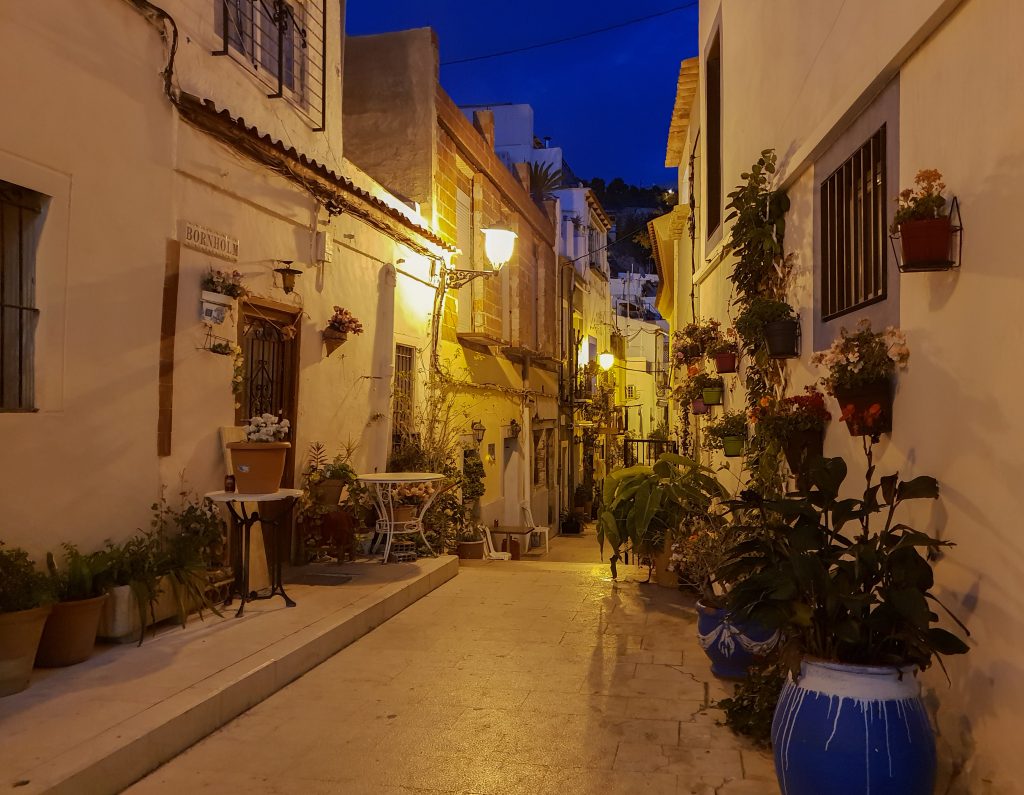 I will try to fit our Alicante trip in one blog post as we only spent 3 days in the city and i feel it was almost enough.

If you visit during spring or summer, i suppose that you can spend more days there, because you will be able to swim in the sea waters. As a coastal city, it has great beach and promenade, which are the heart of the city. We spent about 2 hours sun warmth-and-light accumulating. There were many others like us. People gathered in the noon hours. The photo below is taken in the early morning, this is why there seems to be no one. That day the water temperature was 19 degrees. 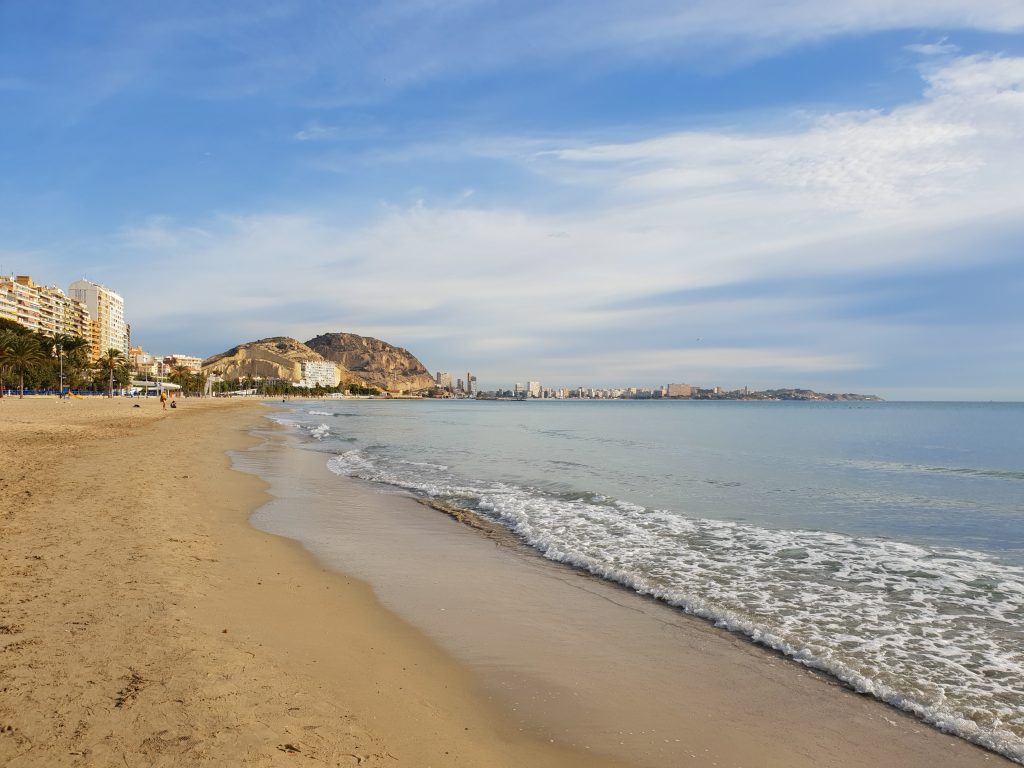 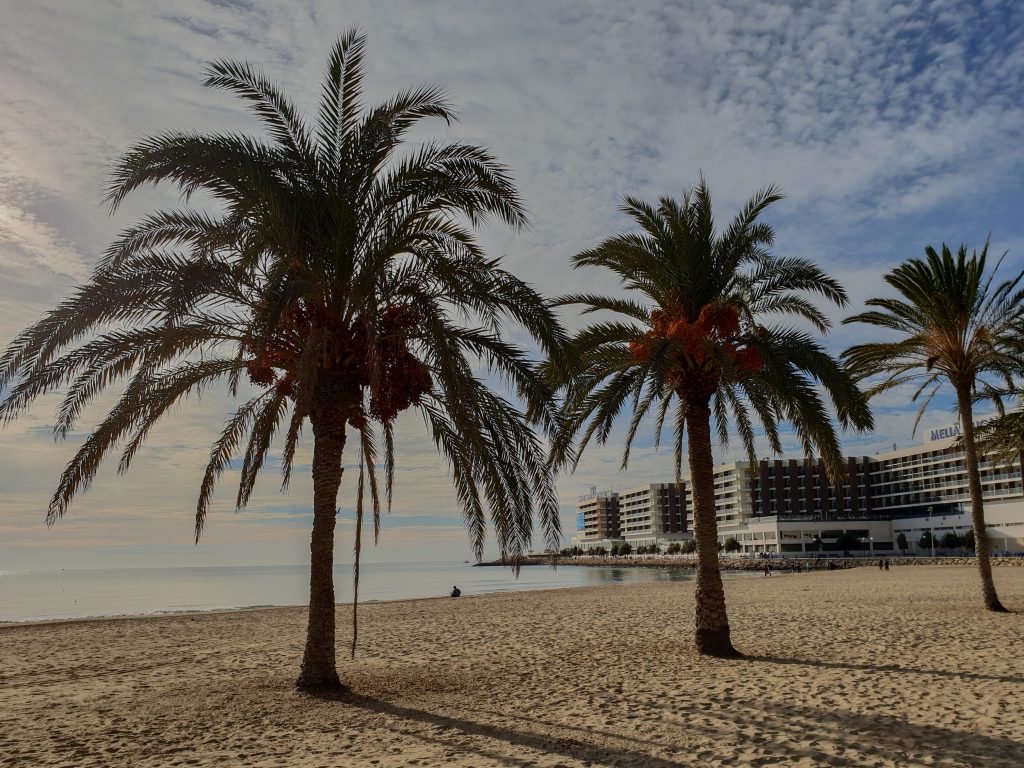 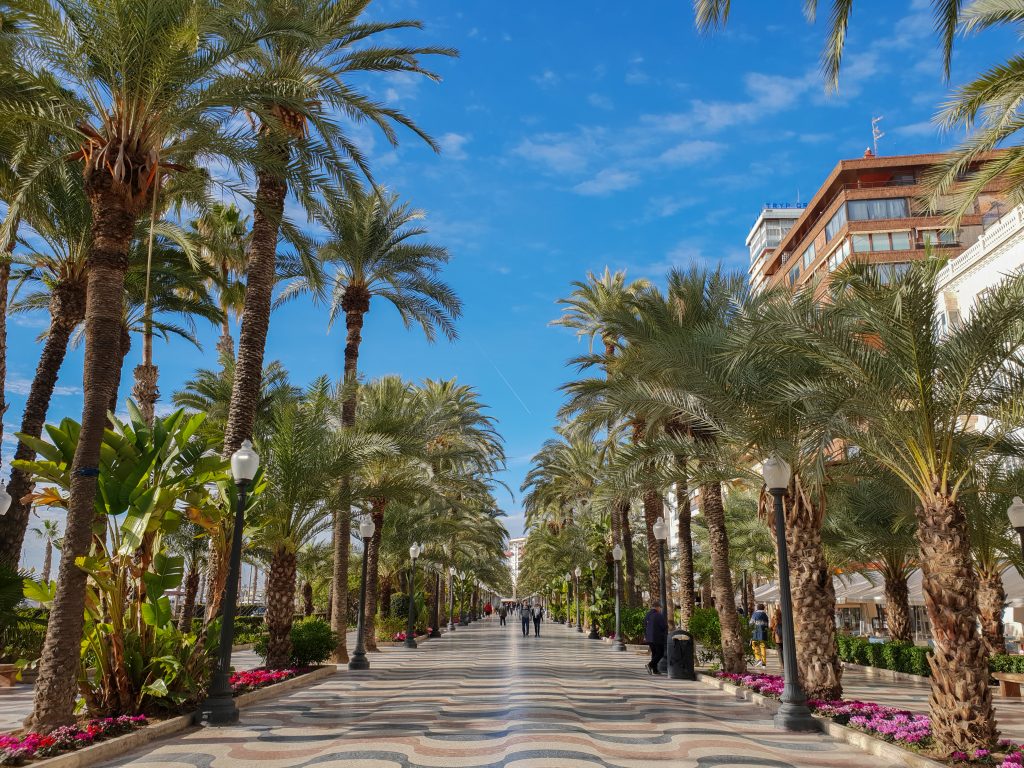 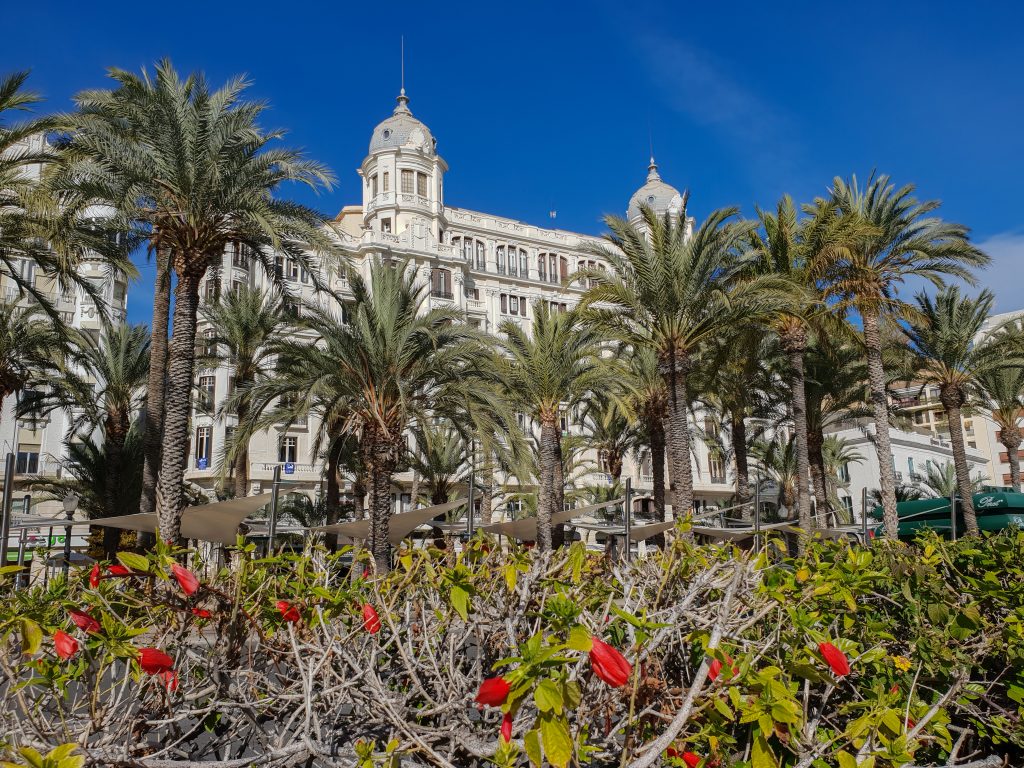 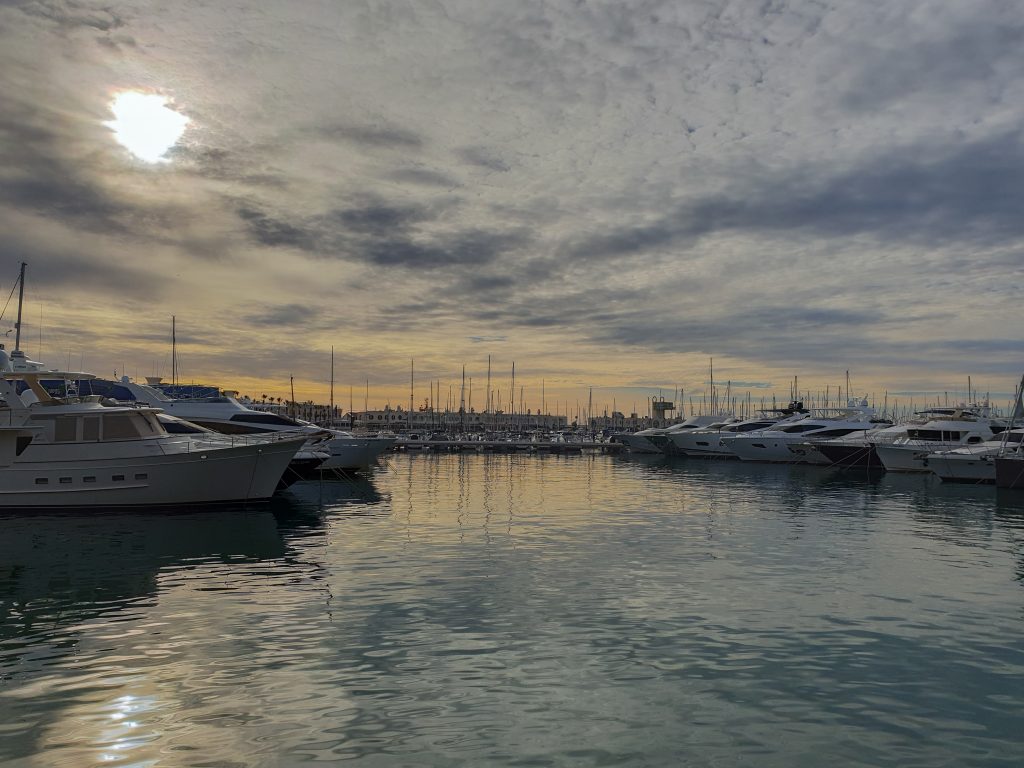 It will not take you more than 1 day walking to see most of the city. In the cosy old town we saw the main cathedral of Saint Nicholas of Bari which was constructed over an ancient mosque in the years between 1613 and 1662. Inside the cathedral is one of the most impressive examples of Spanish Baroque – The Chapel of Holy Communion. 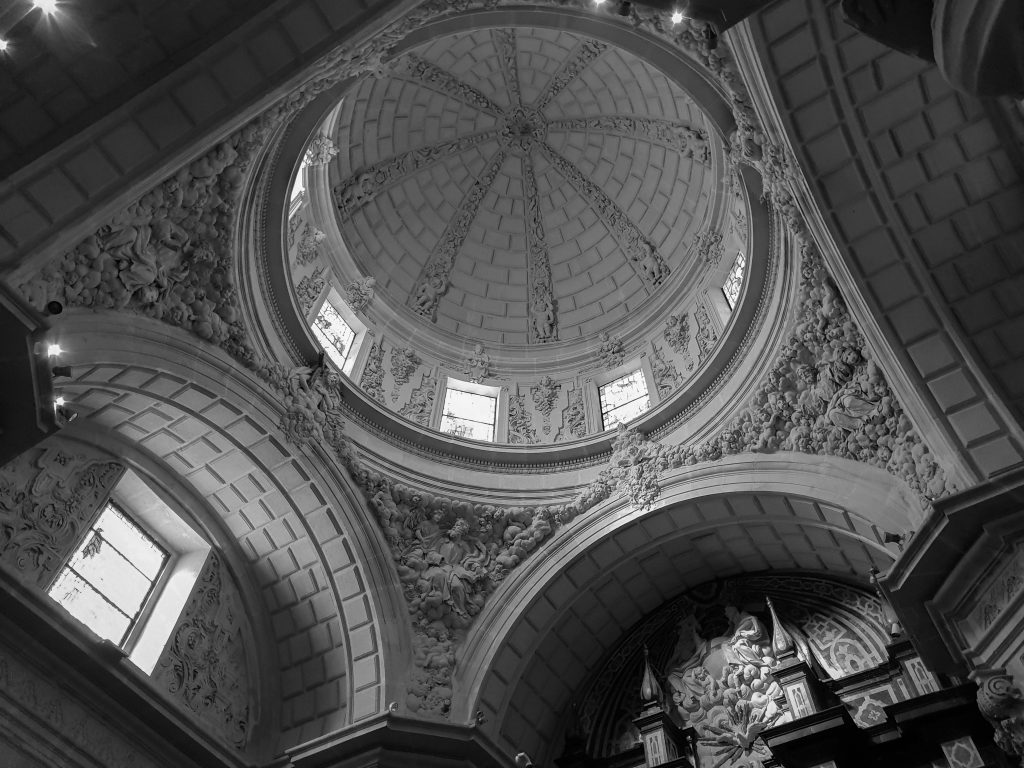 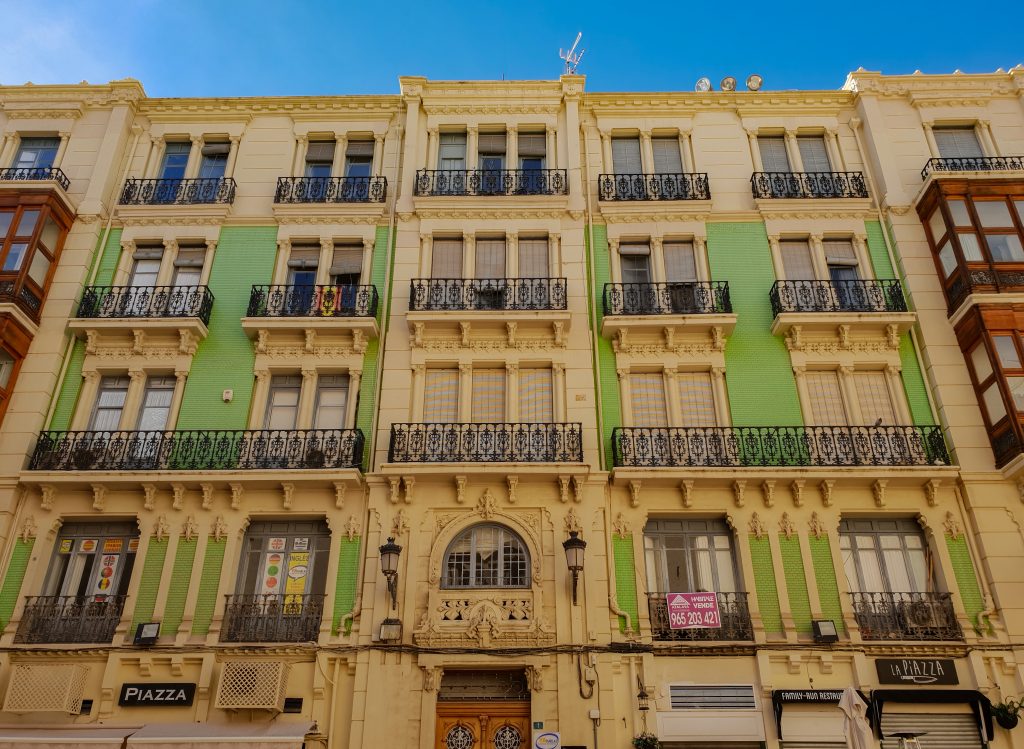 A building right opposite the Cathedral’s entrance

One of the most amazing things which i saw in Alicante were the ficus trees. There were several communal gardens where you can see many of them. The one below is at Plaza de Gabriel Miro. I would recommend that you take a walk in the park called Parque Canalejas. It is located right next to the sea port. Some of the trees are so old and massive, that the municipality had to install extra support to hold their heavy branches. It looks like you are in a fairy tale around these giants. 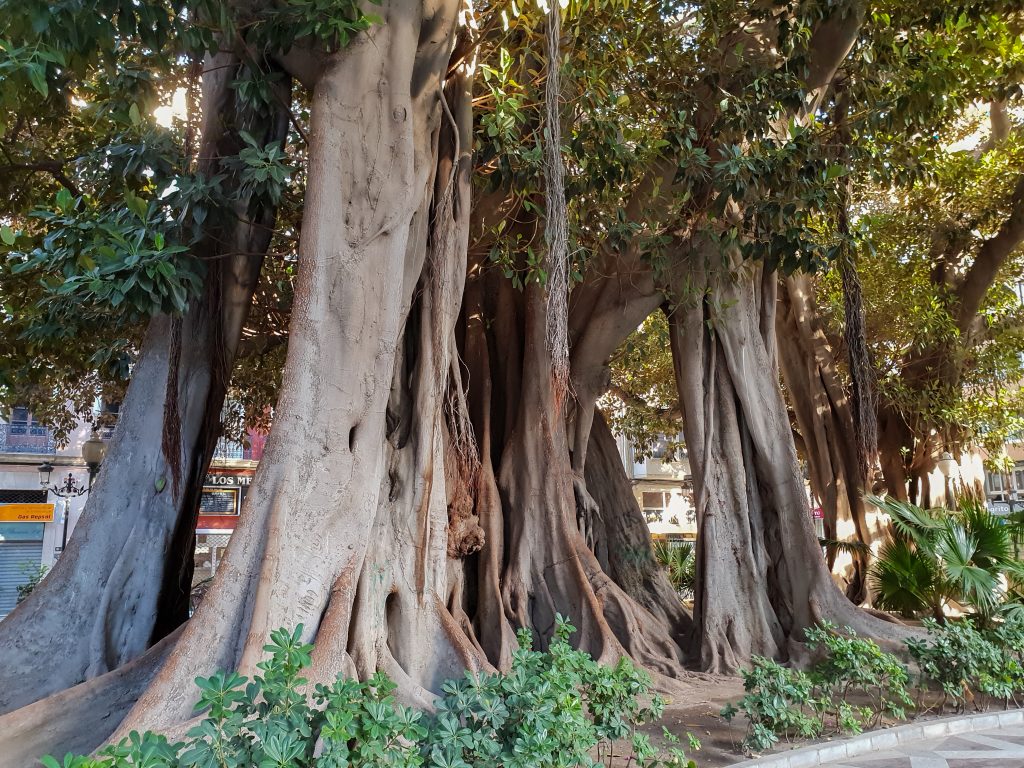 Last but not the least, do not forget to get some nice local speciality from the central market. You can bring home everything you like, from nuts to fish, meat, wine, olive oil, vegetables, fruits etc. You will not be disappointed! 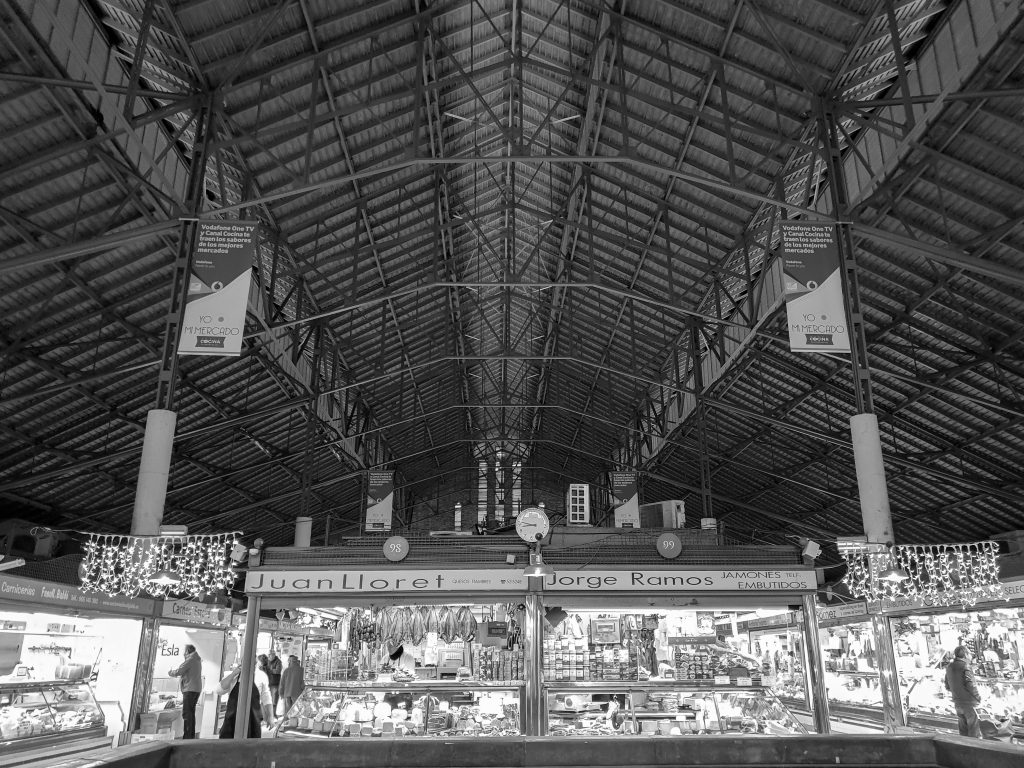 One last question-Haven’t you decided to visit Alicante yet?