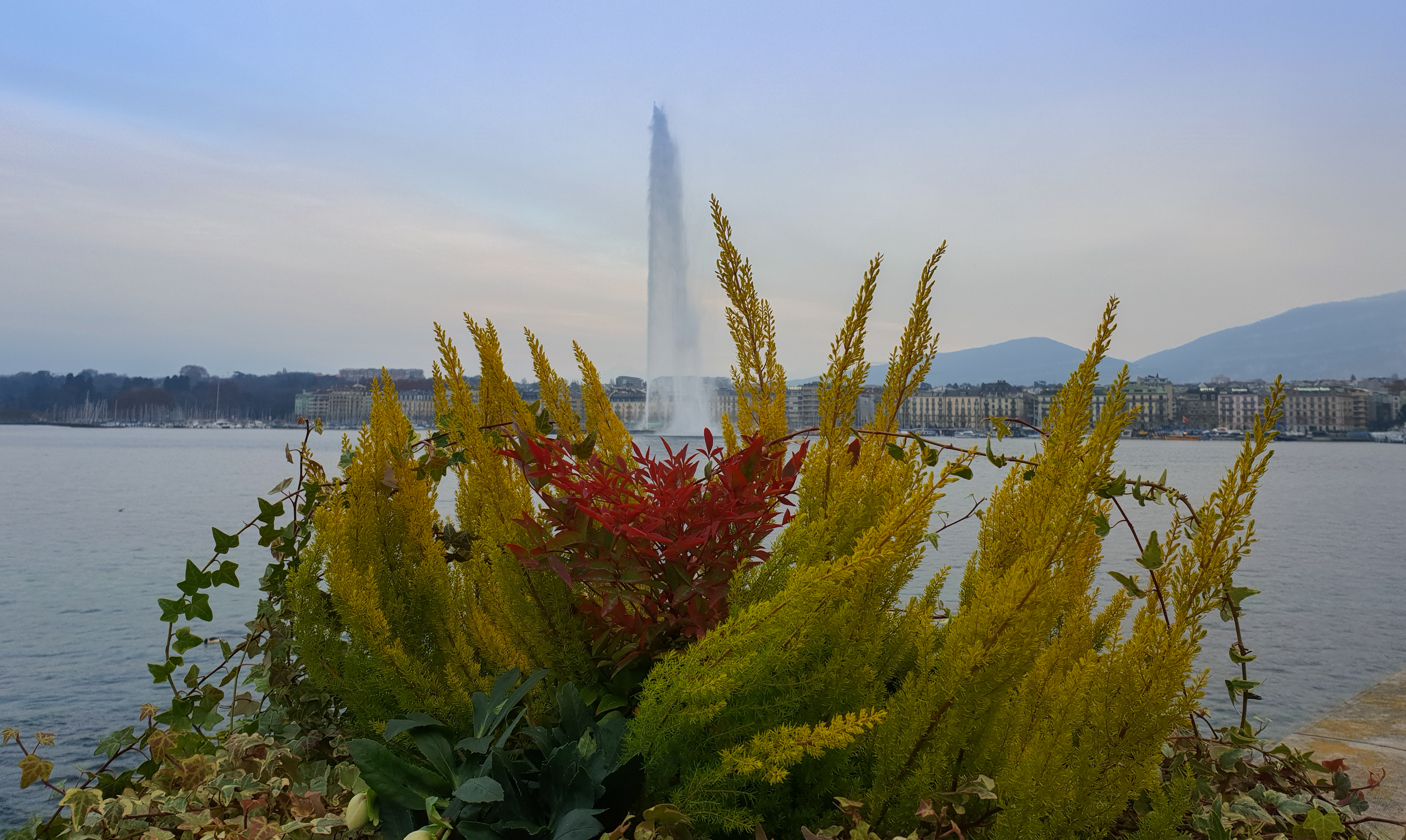 are you puzzled about the Ferney-Voltaire name in the title of this post, don’t be 🙂 This is where we go at least once an year to visit my uncle. You might also remember the philosophy lessons when you might have heard of Voltaire and his numerous works.
This little town lying between the Jura Mountains and the Swiss border is part of the metropolitan area of Geneva.

Voltaire, the french writer, historian and philosopher who is famous for his advocacy of freedom of speech, religion and the separation of church and state, bought a large estate in the town in late 1758 when king Louis XV banned him from Paris. He was also the one who changed the name of the town from Fernex, to Ferney and introduced theatre to the people of Ferney, art that was banned in Geneva during that time . His estate is open to public and you can visit the gardens and the indoors. First time we visited we saw the gardens, they are having the most precious views over  Lac Leman, The Alps and Mont Blanc.

This post will only show you few photos of Ferney, but there will be another one to show you around Jura Mountain, Voltaire’s estate and few other cute villages of this wonderful French region.

Since we arrived late, here some night photos of the little town. 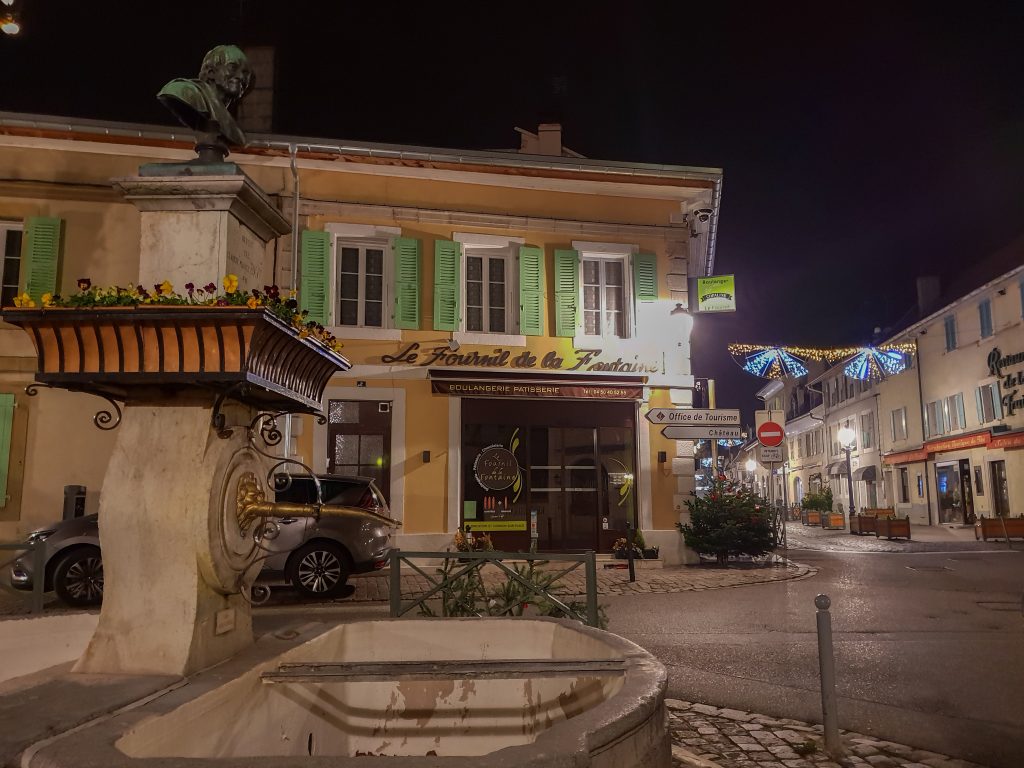 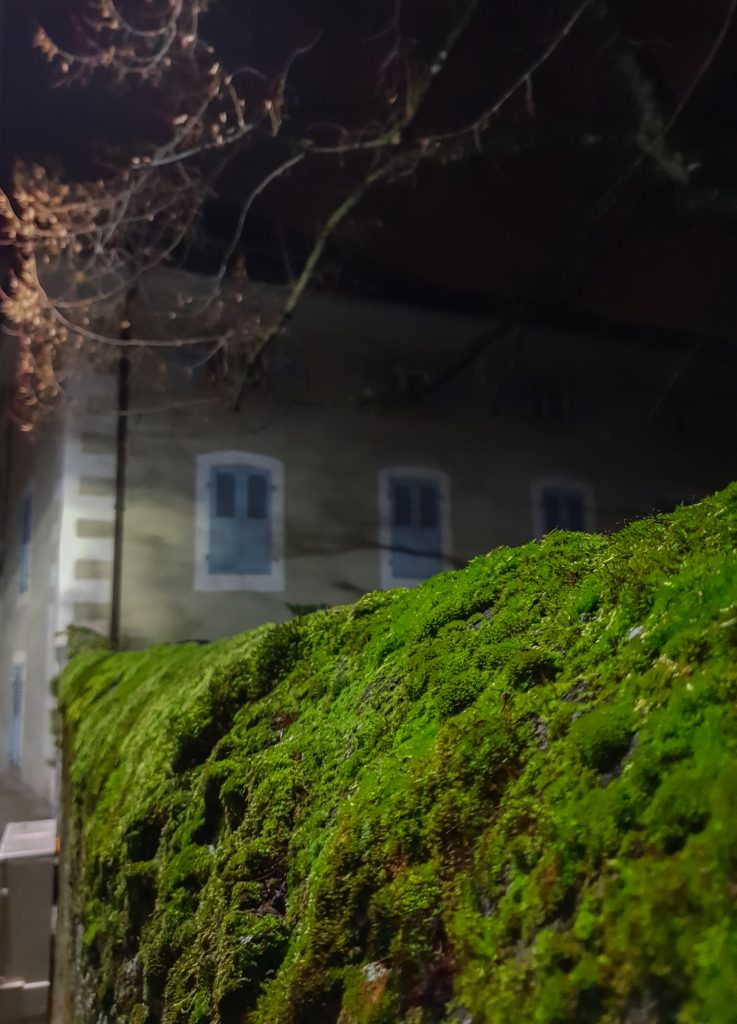 Today Ferney is a peaceful town with large international community due to its proximity with CERN and the United Nations Office in Geneva.

Every Saturday there is a small cosy market with local produce and many other hand-made things which is nice to see if you are staying in the area. Every Sunday in a neighbouring village called Divonne-les-Bains, you can visit even bigger and nicer French produce market, only for delicacies and smelly cheeses 🙂

We spent only 1 day in Geneva, and i am certainly going back. The city is spread on hills, has magnificent views over Lac Leman and a cosy old town. We visited before Christmas, so the decorations were all over the city and the windows of the fancy shops. Every corner you could shop for Swiss watches and famous brands. First thing we saw was, of course, the lake. Lac Leman, one of the largest in Europe is shared between Switzerland and France. It is 73 km long and 14 km wide, with maximum depth of 310 meters. Primary water inflow comes from the  river Rhone which also makes the lake the largest in its course. 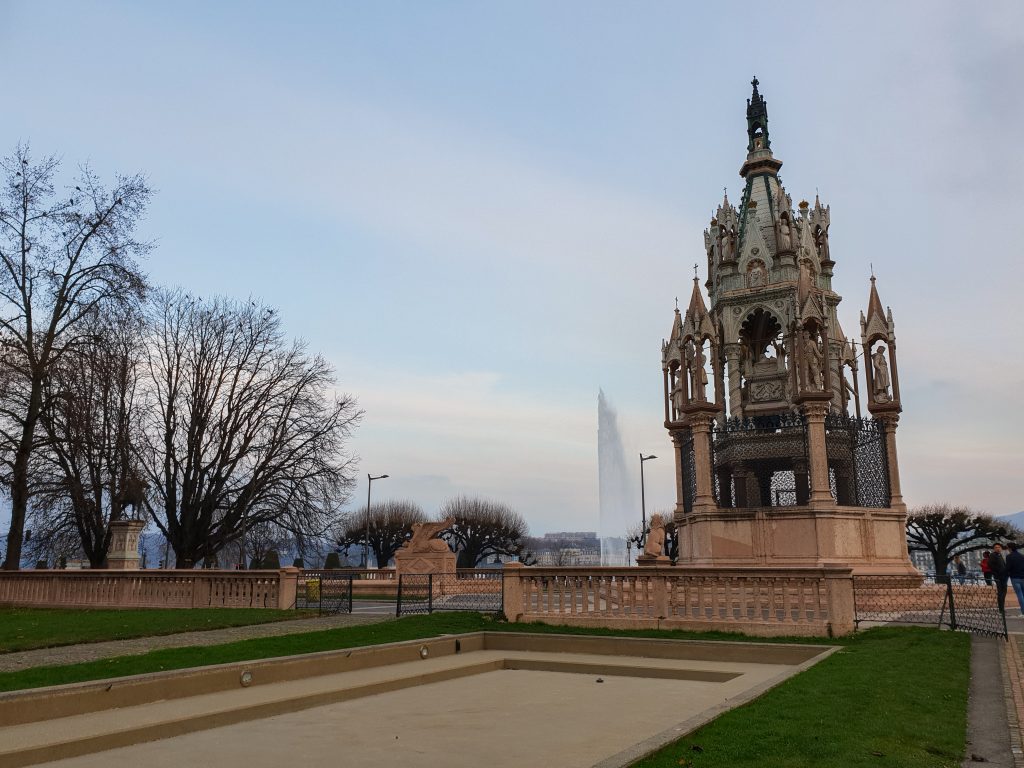 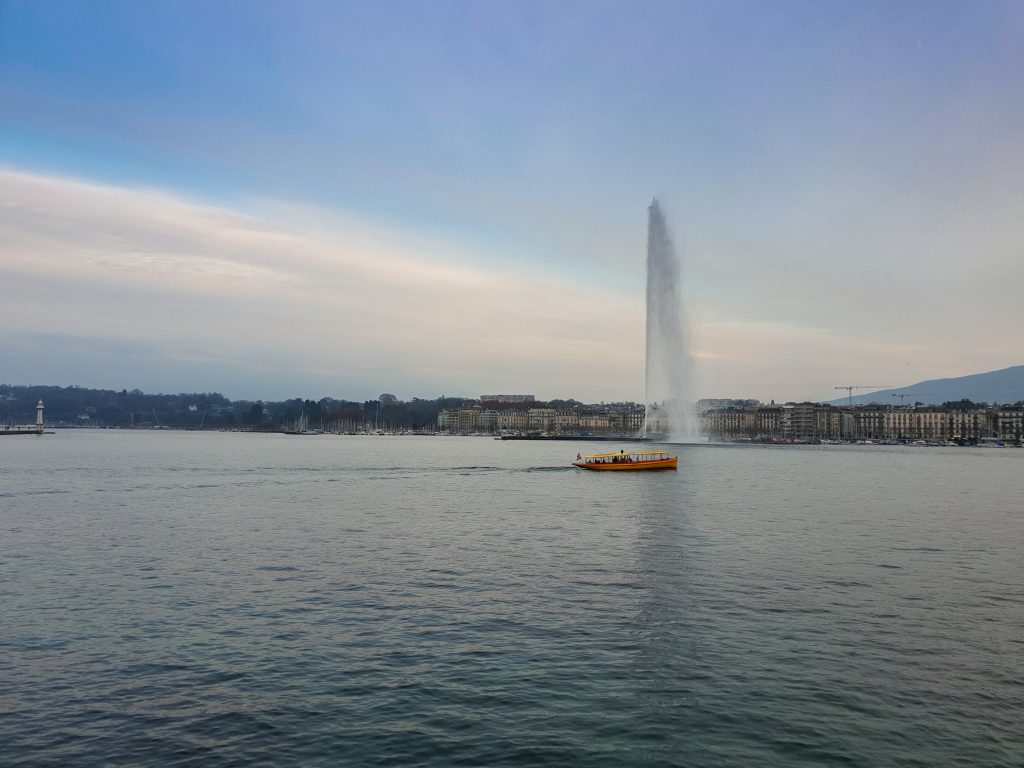 After seeing the lake we headed towards the cathedral standing boldly on one of the city’s hills. We passed through several small illuminated squares and little restaurants and arrived at Place de la Madeleine below which offered beautiful views towards the lake. 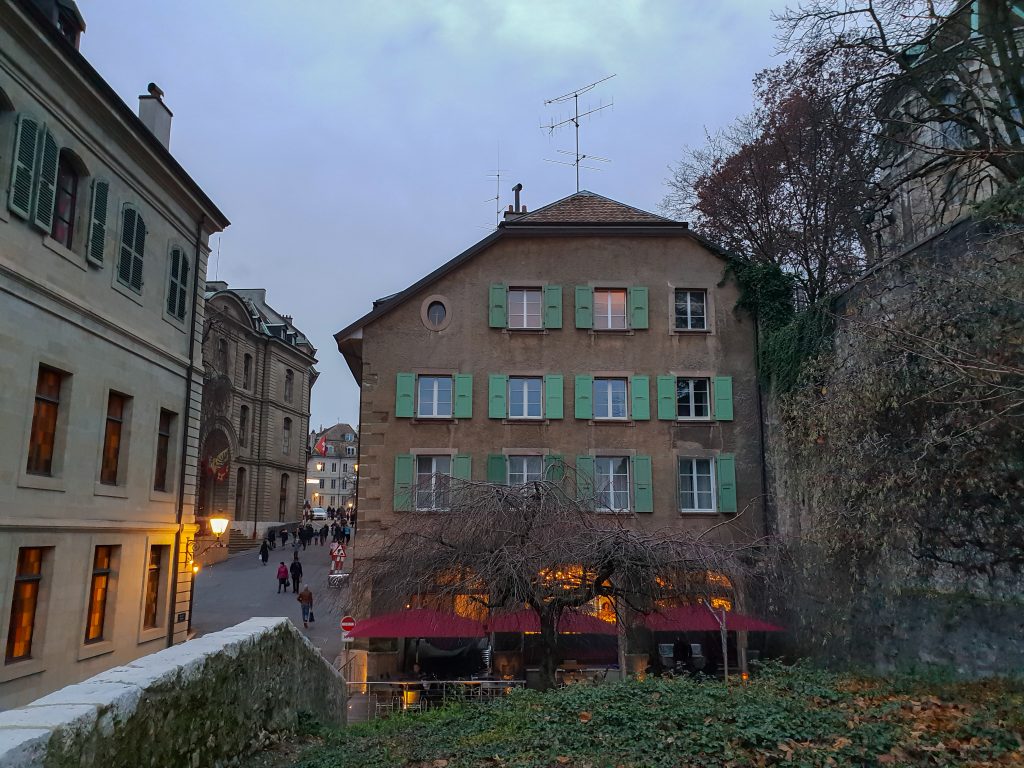 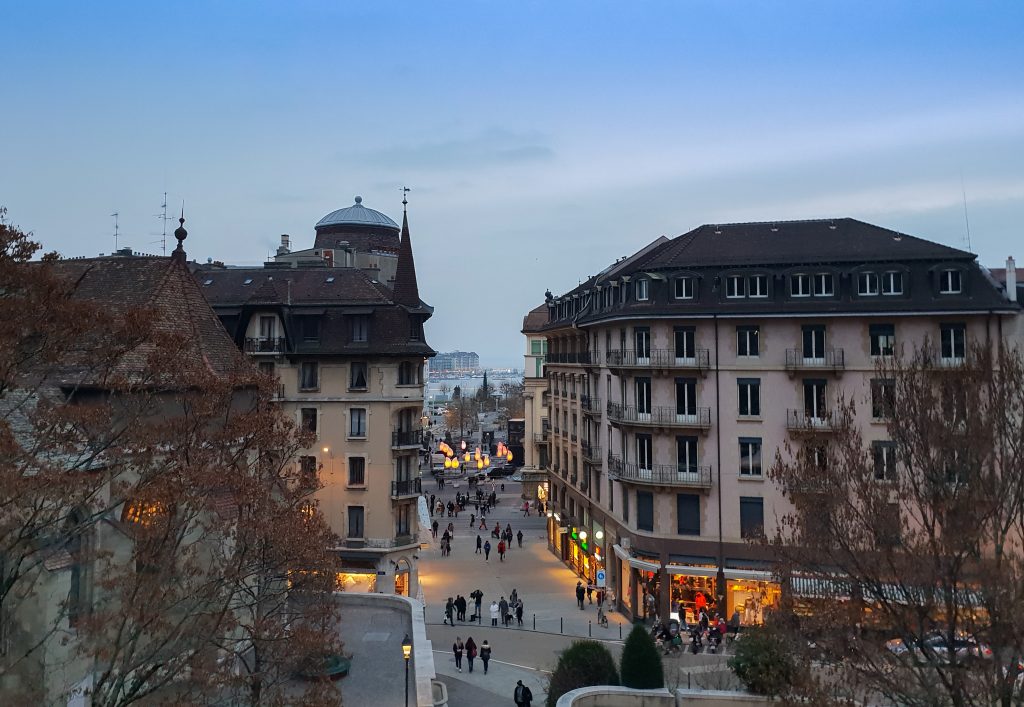 I would regard the St. Pierre Cathedral as one of the most famous landmarks of Geneva. It is a Roman Catholic cathedral, which became Protestant Church of Geneva. The present look of this cathedral dates back to around 1160 and the style is – Gothic 🙂 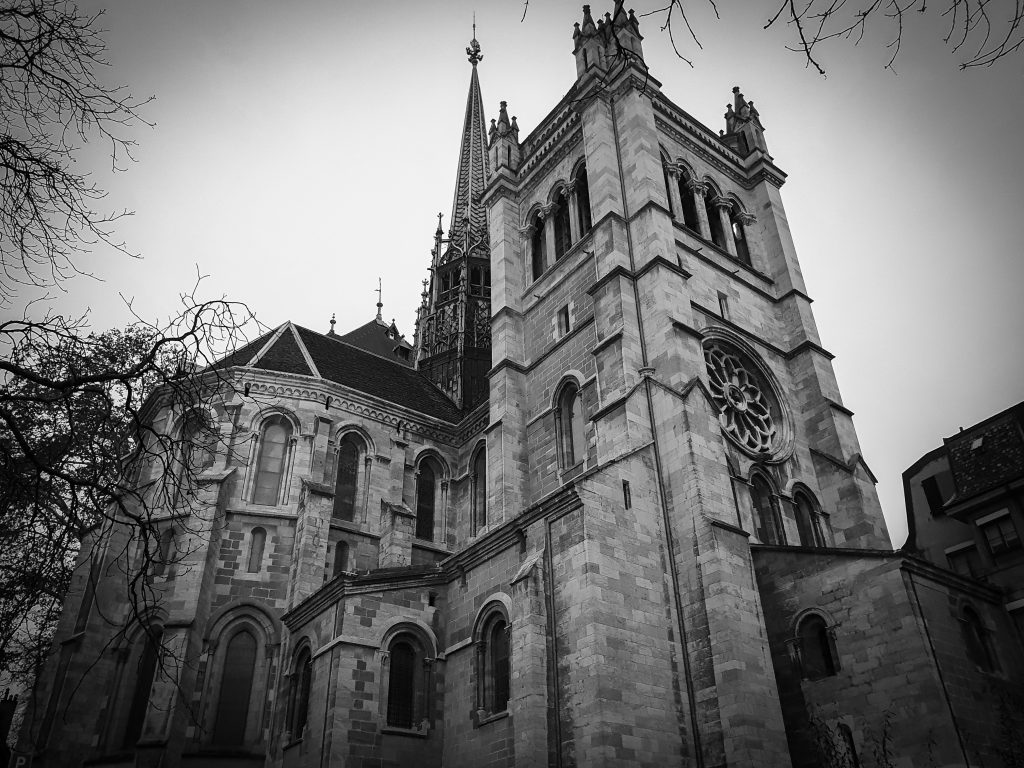 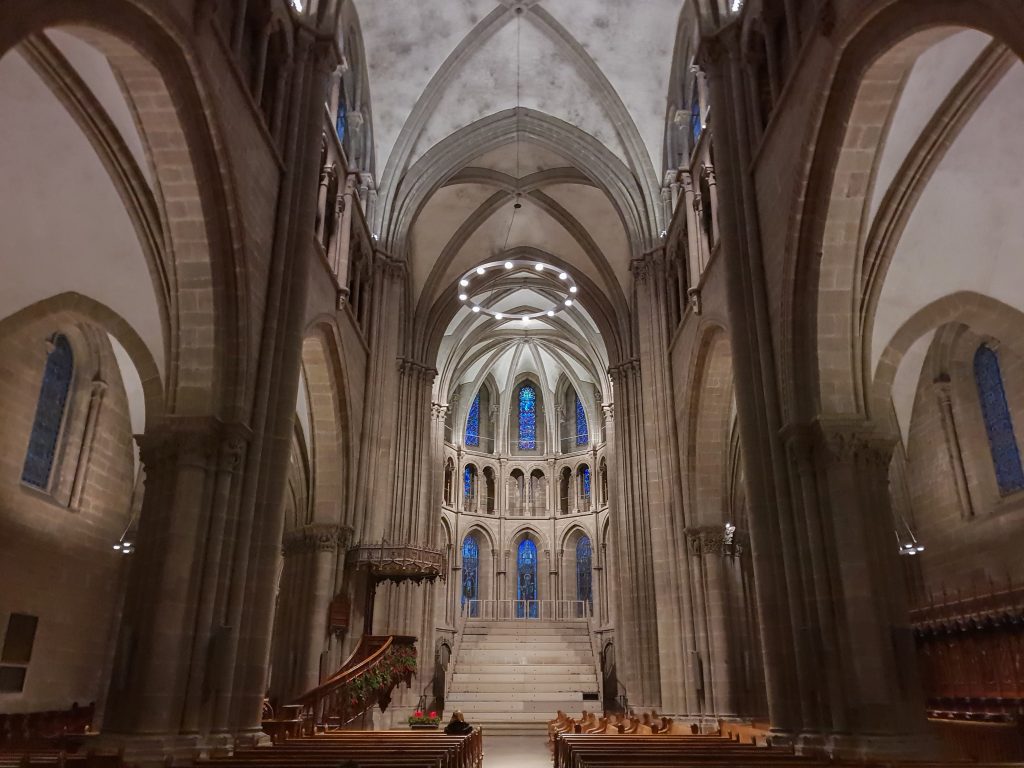 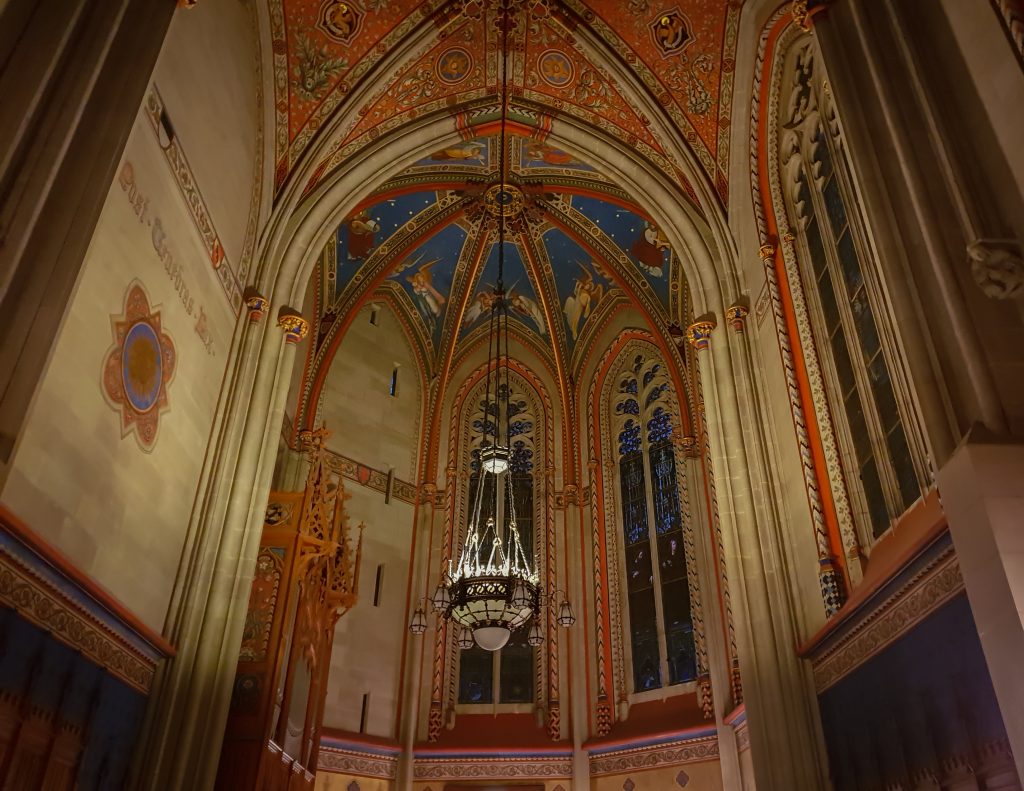 Chapel of the Maccabees

The colourful chapel which you see on the above photo is part of the St. Pierre cathedral and it is located in the south-west wing. It was built in 15th century. During the Reformation the chapel was used to store salt and gunpowder, but later in 17th century it was used as a venue for lectures on philosophy. The chapel was renovated in the 19th century in neo-Gothic style. The vault was redecorated displaying the celestial chorus. 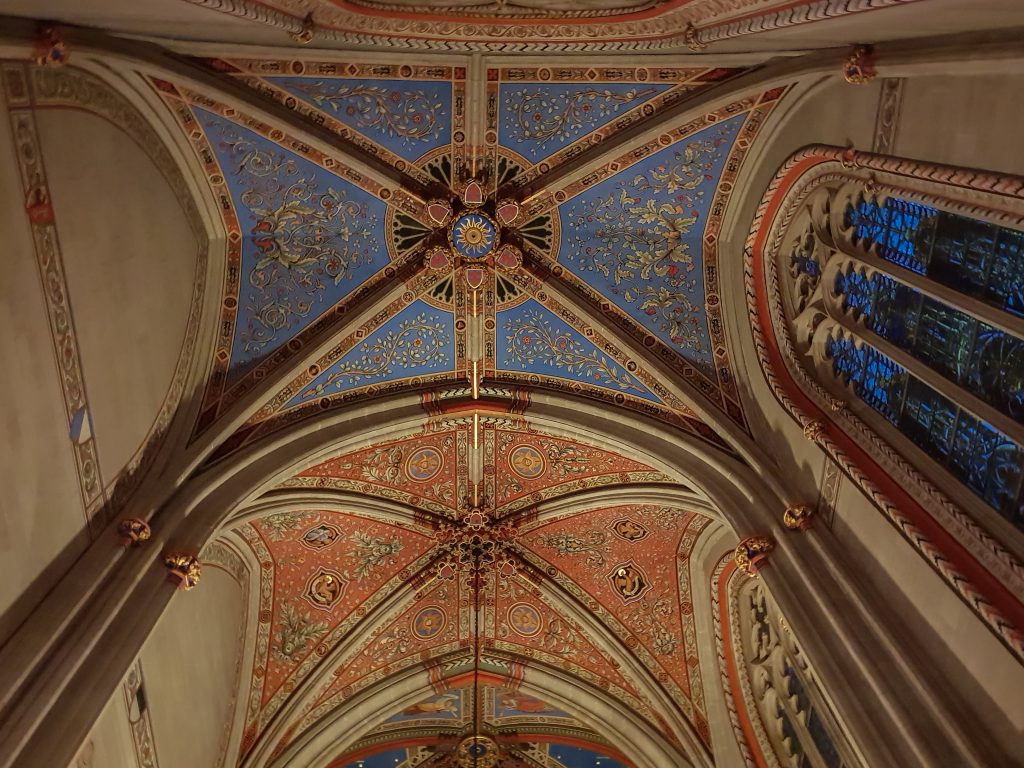 The ceiling of the chapel 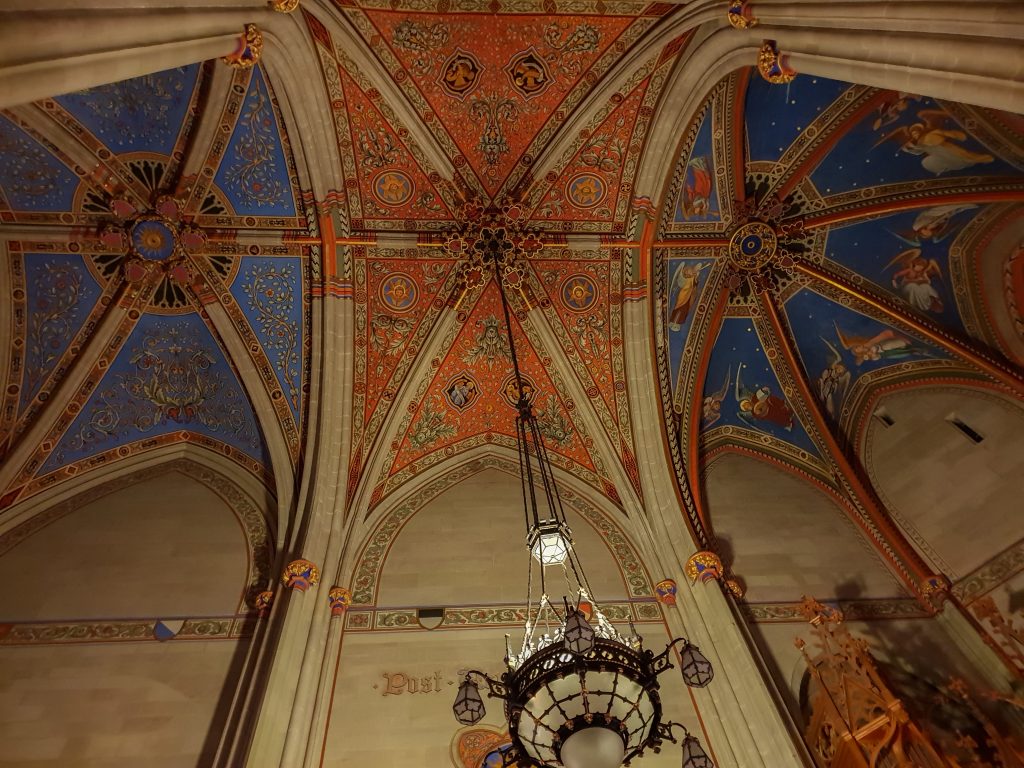 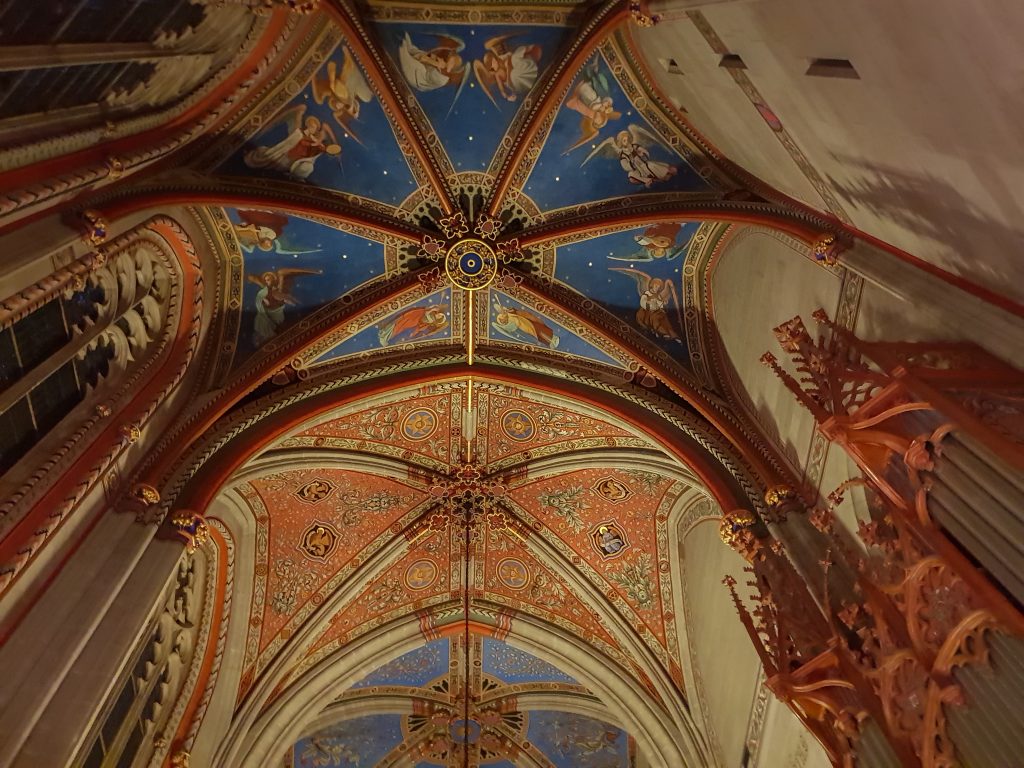 From there our walk continued around the old town of Geneva. I call it old as it has tiny paved streets with cosy bars and little squares. We wanted to see the orthodox church and we took few photos on the way. 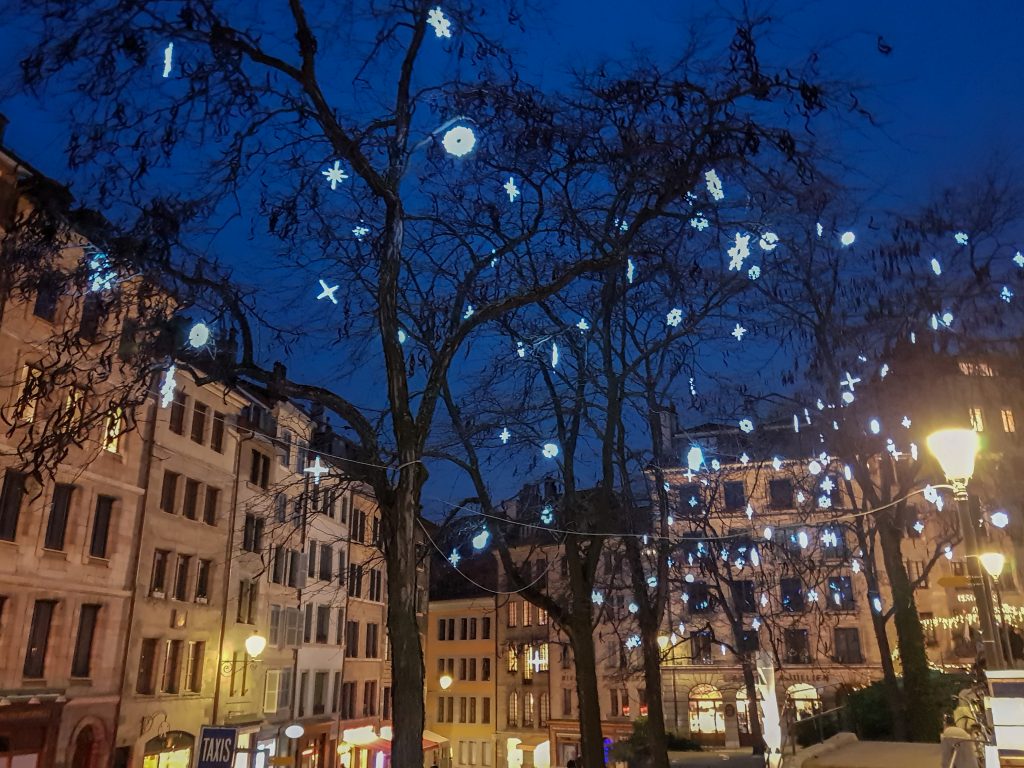 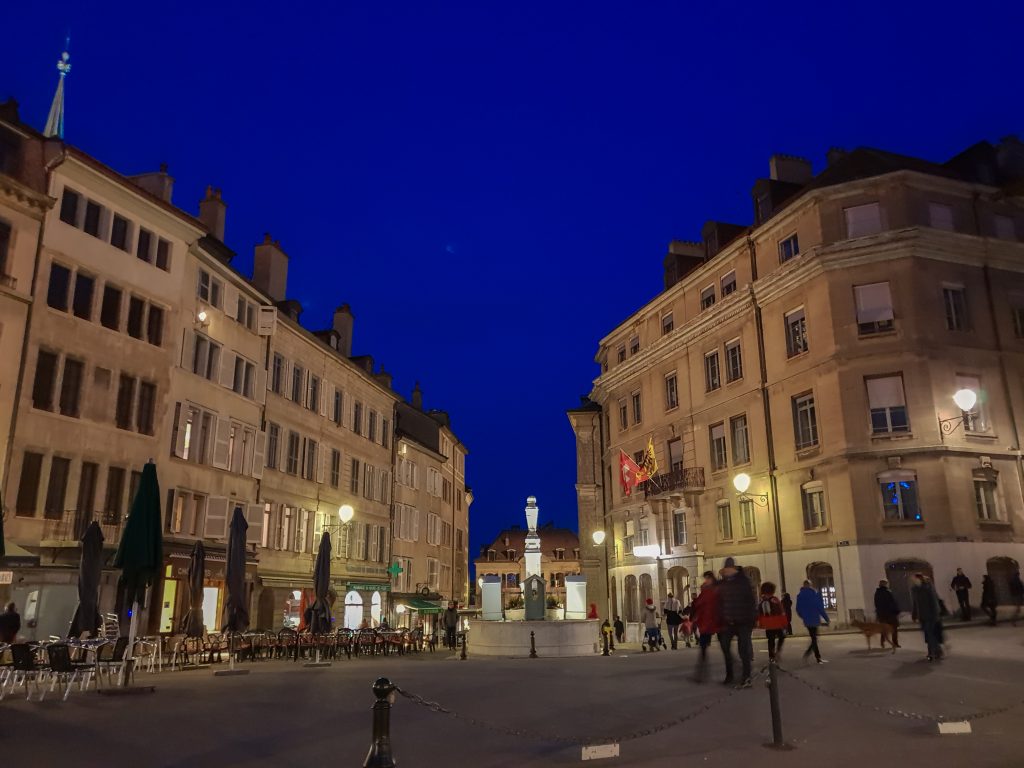 We were surprised that during our visit in Geneva there was the Geneva Lux Festival 2018, which composed of series of light displays around the city with music accompaniment like the one on the below photo. 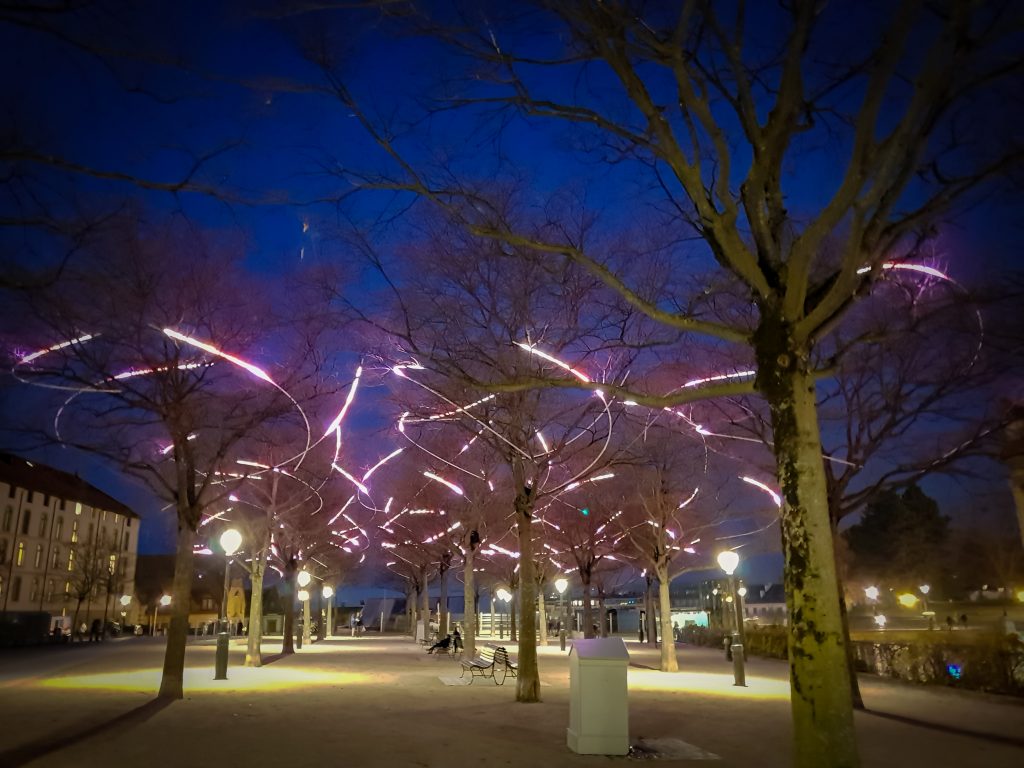 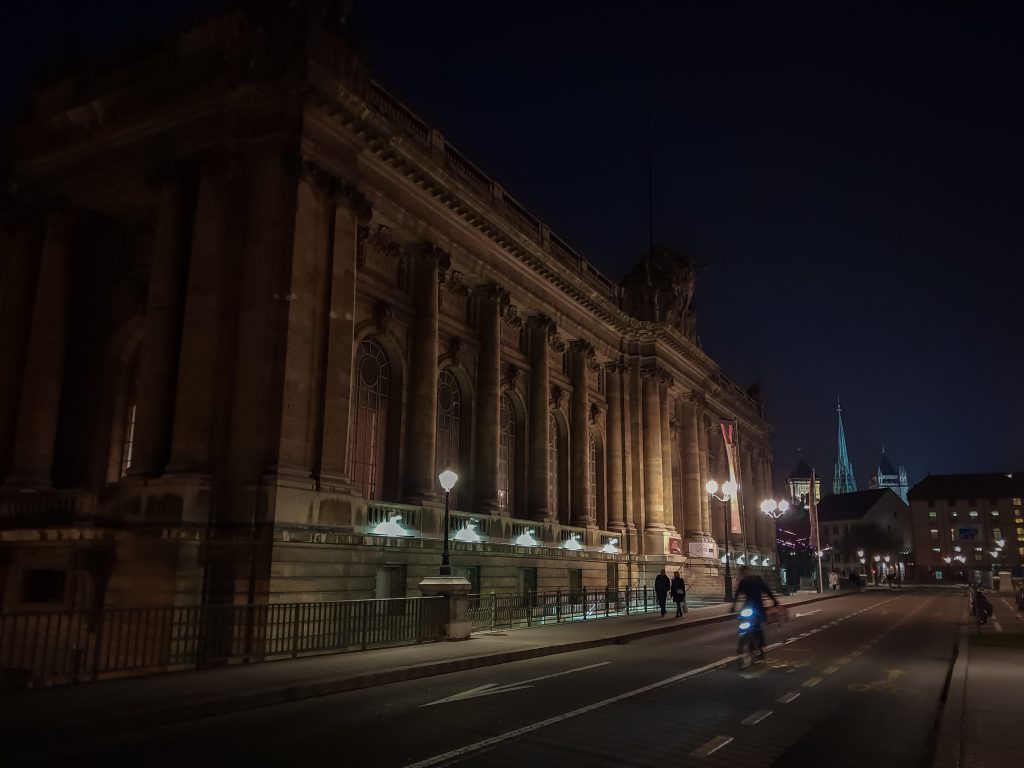 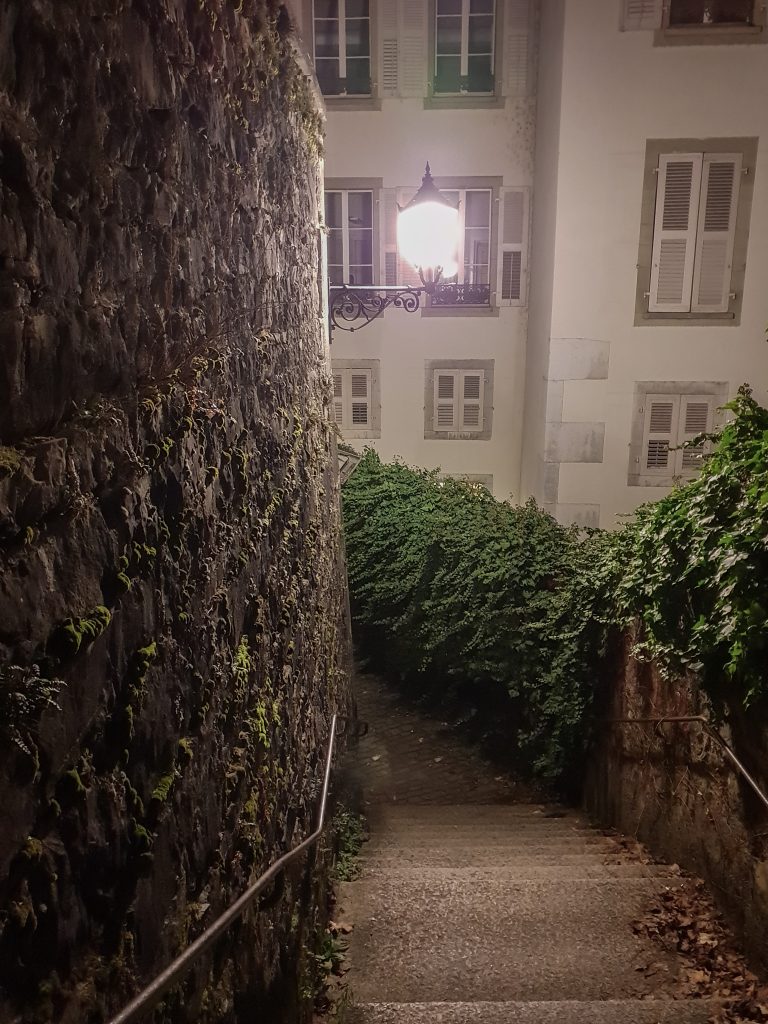 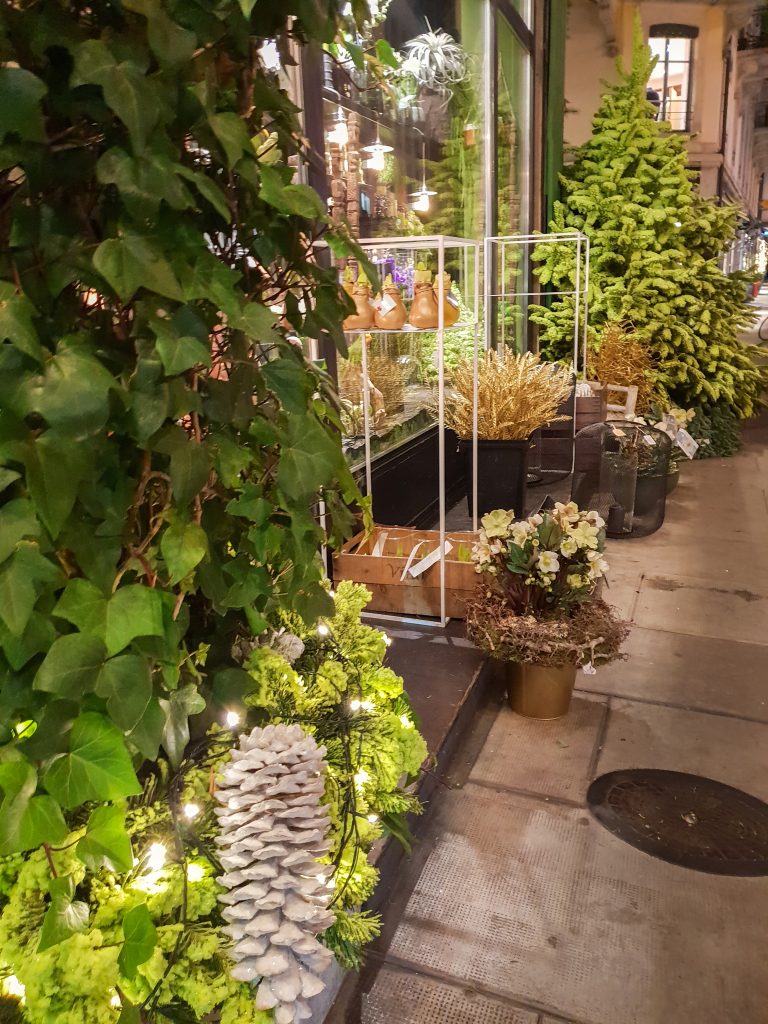 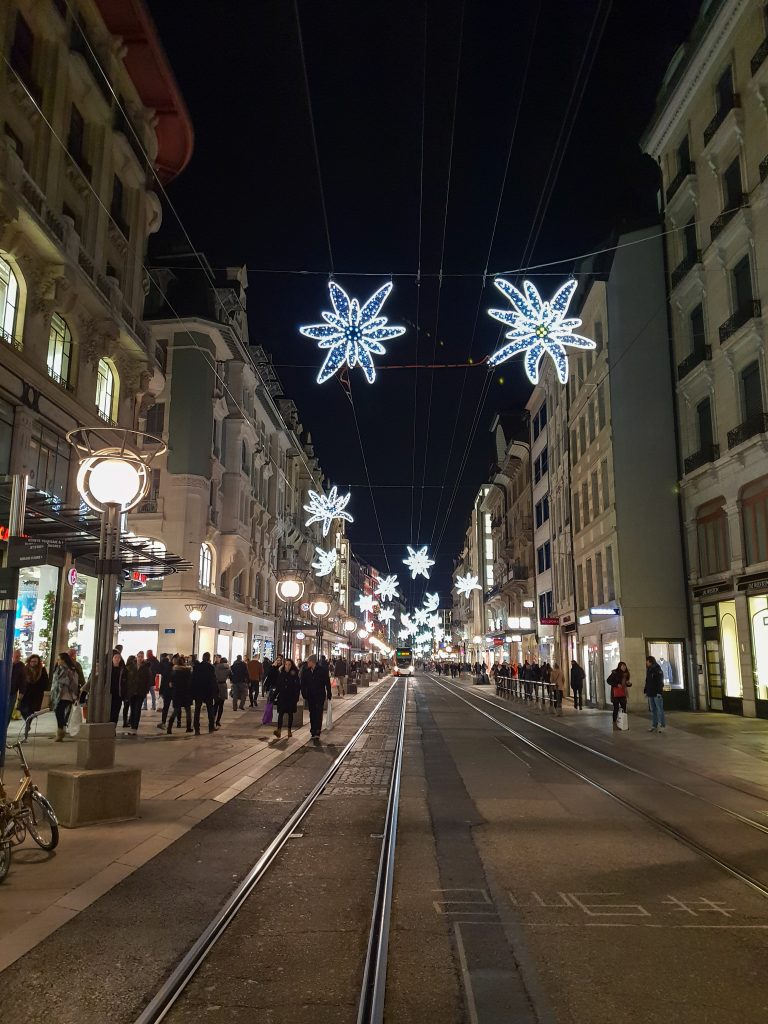 Geneva has trams, not very common for many cities in Europe 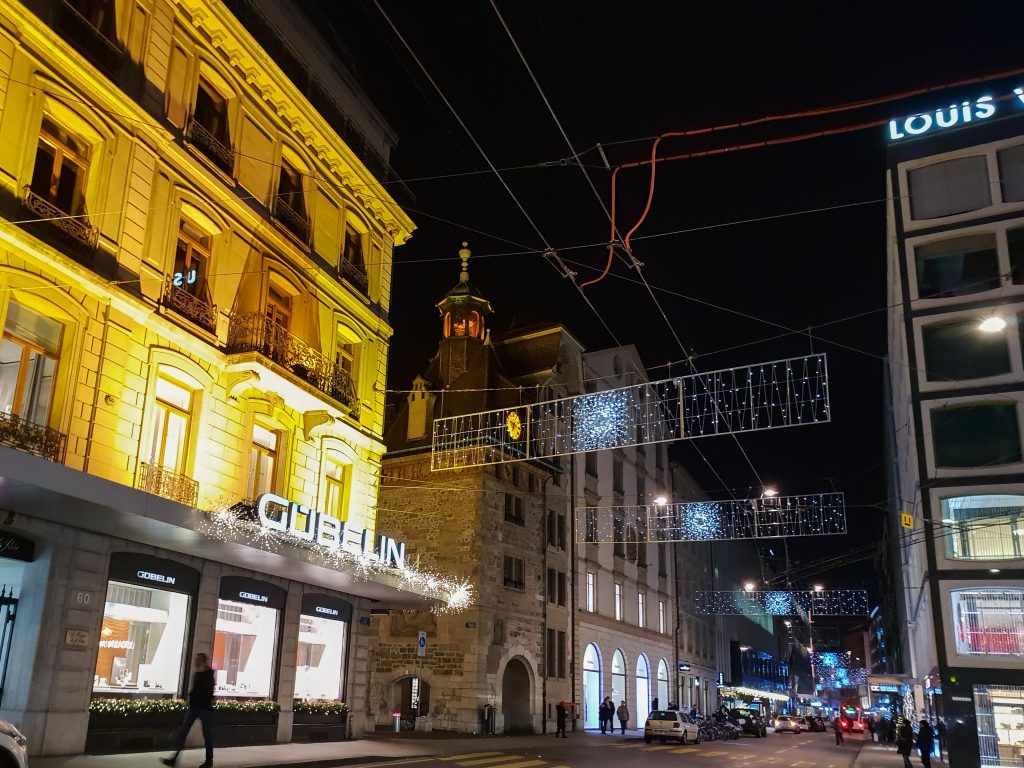 The Molard tower was originally built in 1591 for military purposes and was part of the enclosure which surrounded the city and protected the port. The square behind the tower, Place Molard was for many centuries a port opened to the lake. 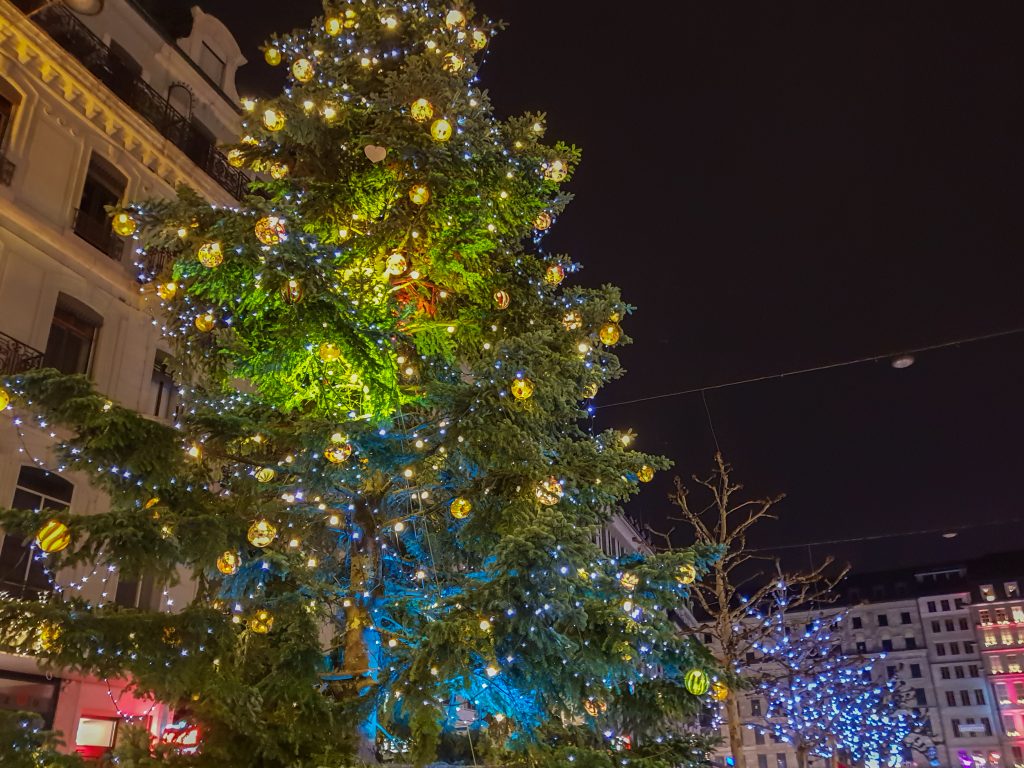 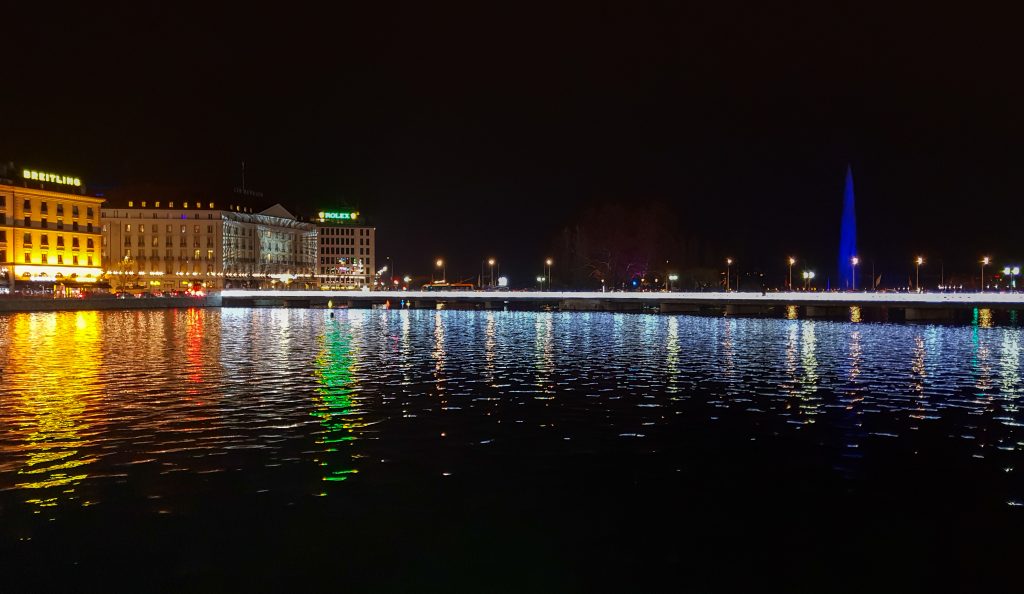 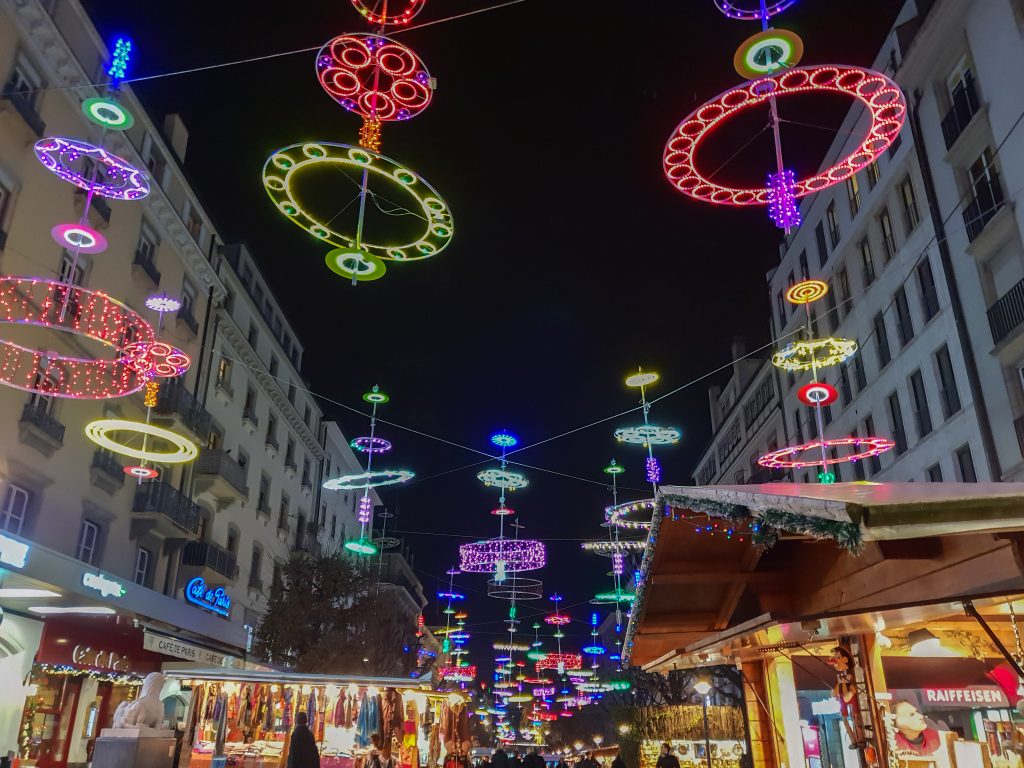 Before we say „Goodbye“ from Geneva, remember to book a tour at the United Nations Office in Geneva and discuss important topics with the delegates 🙂 We did not enter, since there should be more to do for our next visit to the city. 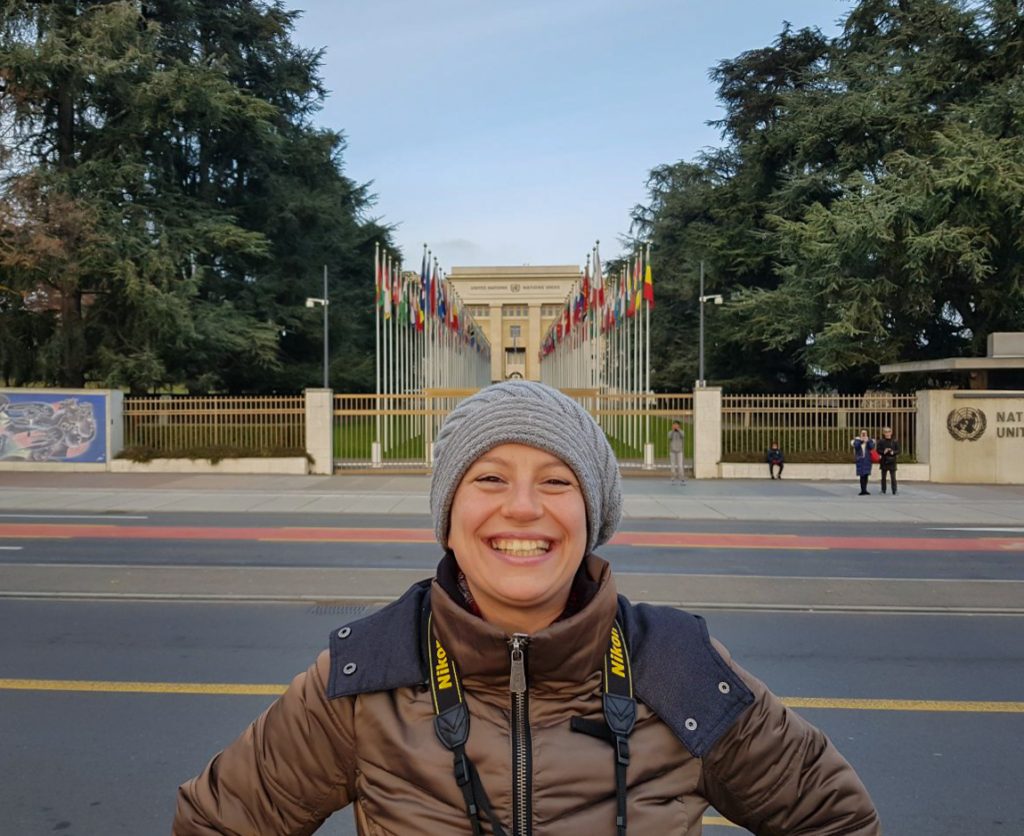 The traveller in front of the United Nations Office in Geneva

Stay tuned for more travel inspiration and the best of Christmas markets from Germany. Cheers!