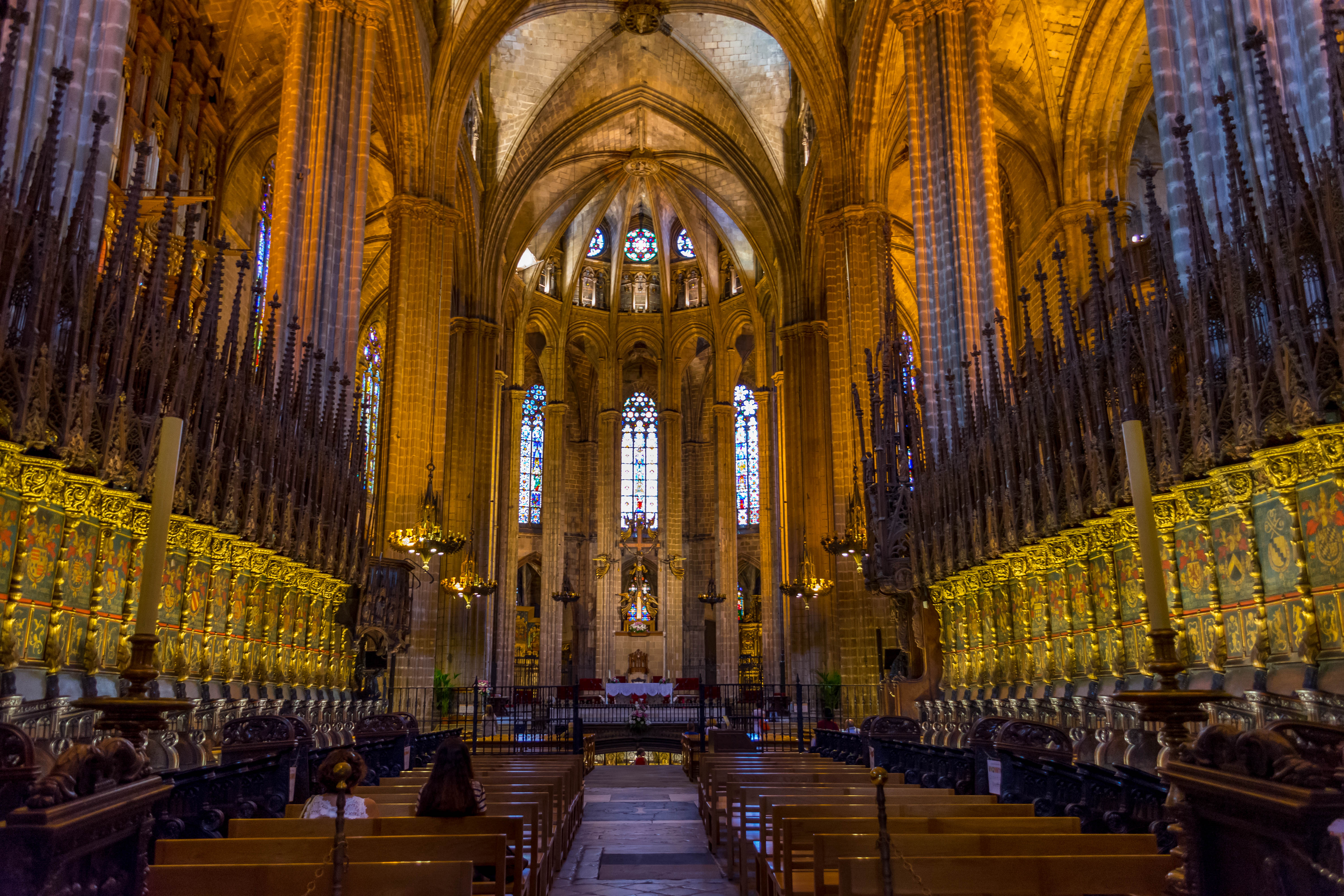 Day 2 of our trip was devoted to Barri Gothic or the Old part of Barcelona. The first stop was the church of Santa Ana. There is a small admission fee to enter the church. The lovely garden at the back yard is worth your deep breath. 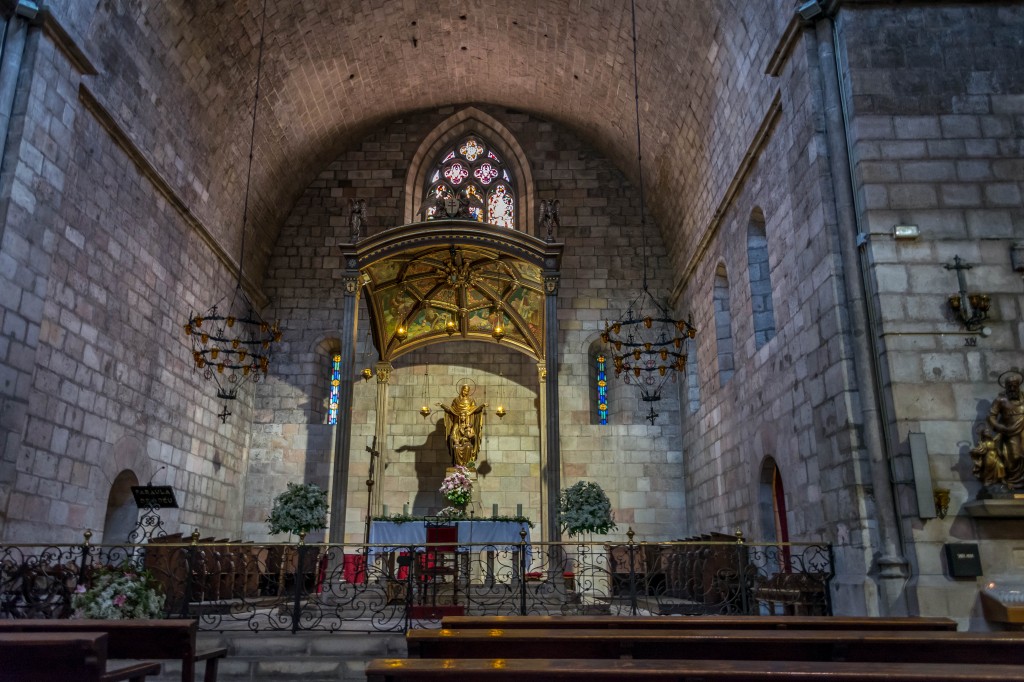 Santa Ana church from inside 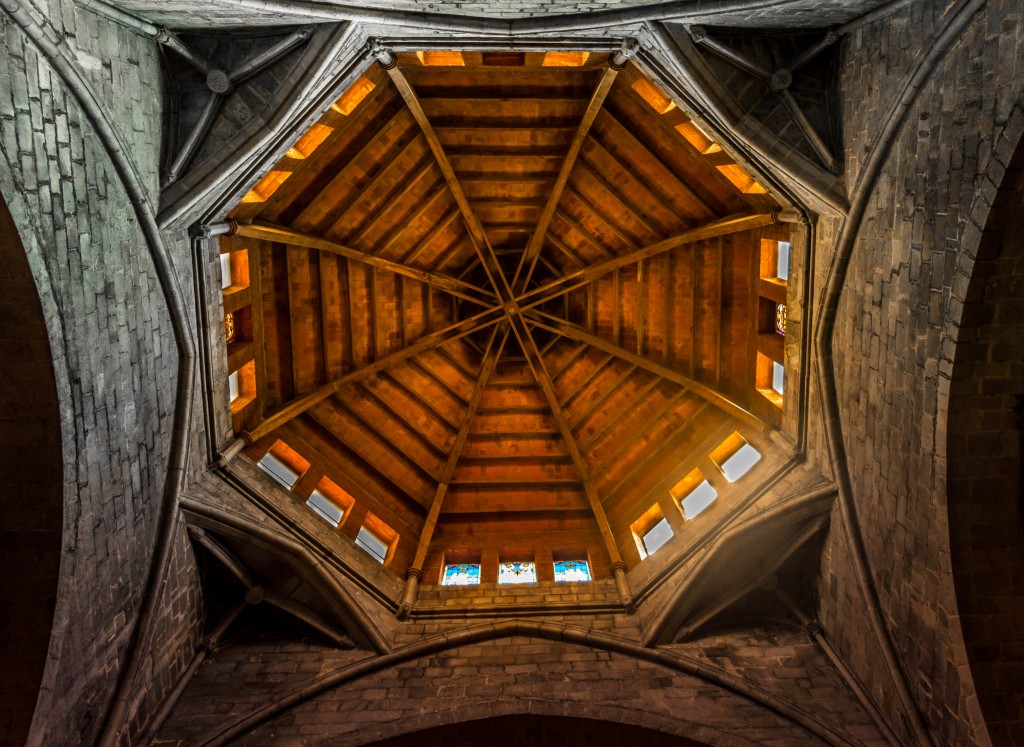 And the lovely gardens with beautiful well. 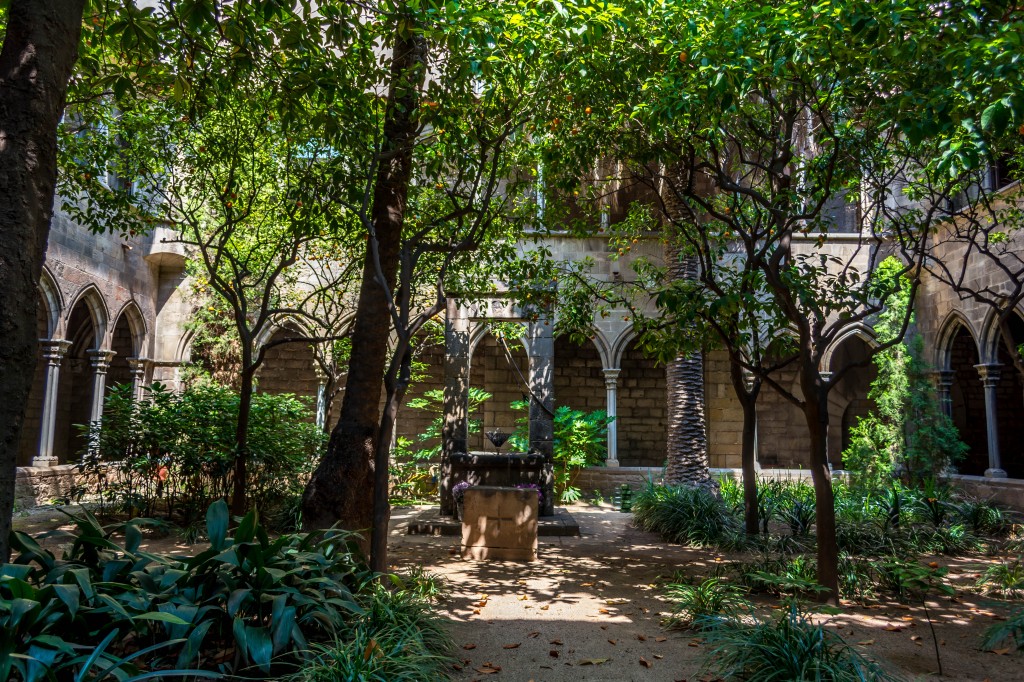 The back garden of the church

The old part of the city is also very attractive with its buildings. Some of them have beautiful balconies and statues on their facades. 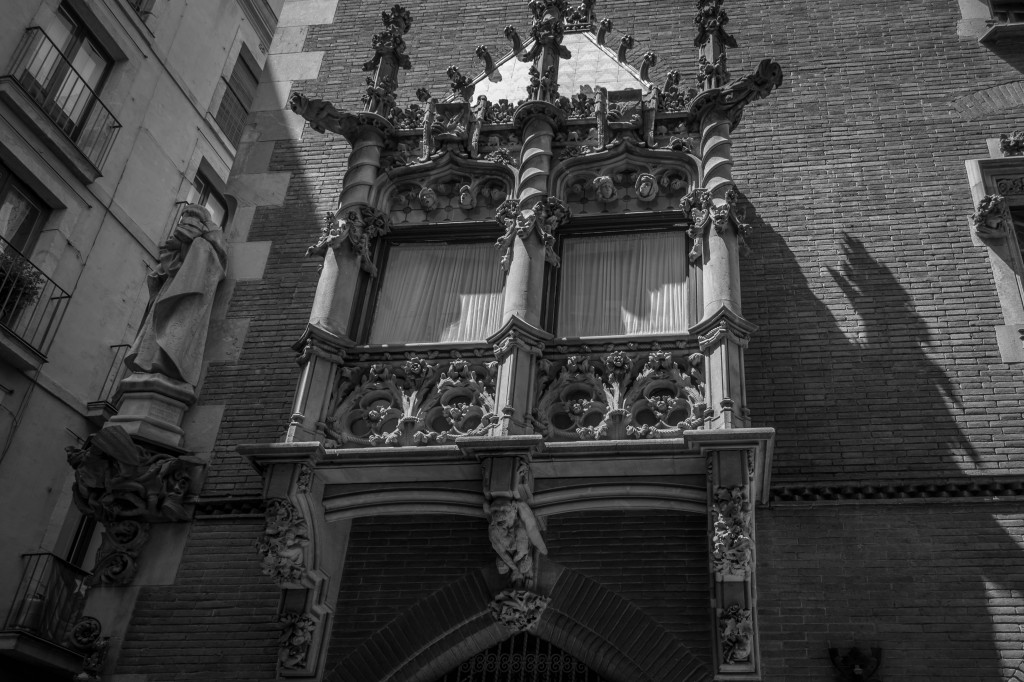 Gothic balcony in the Gothic Barcelona

The Barcelona cathedral (Catedral de la Santa Creu i Santa Eulàlia) is one of the biggest attraction sites of Barrio Gothic. The cathedral was completed in 1448. 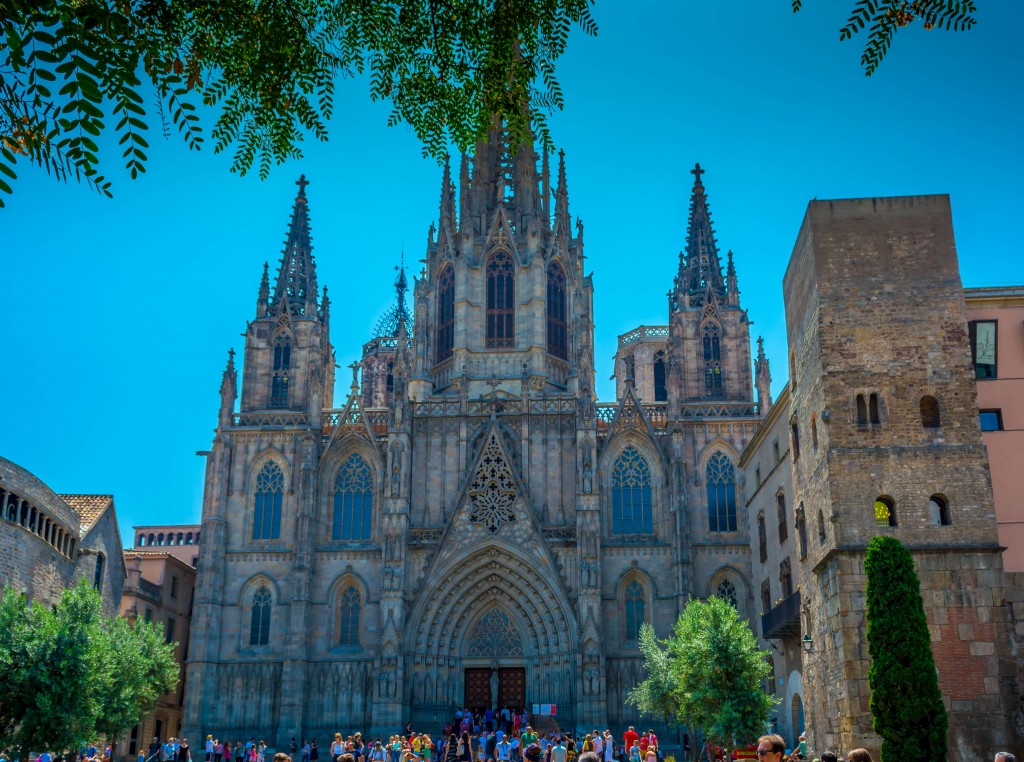 The cathedral has entrance fee but the ticket is valid for the museum which is also part of the complex.

Barcelona cathedral from inside 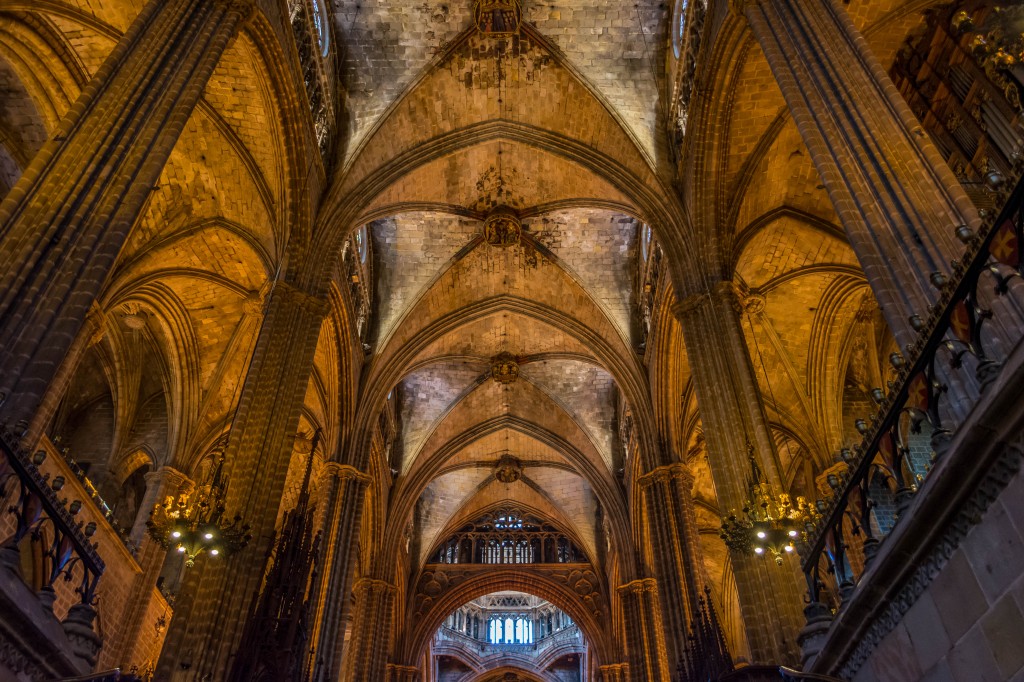 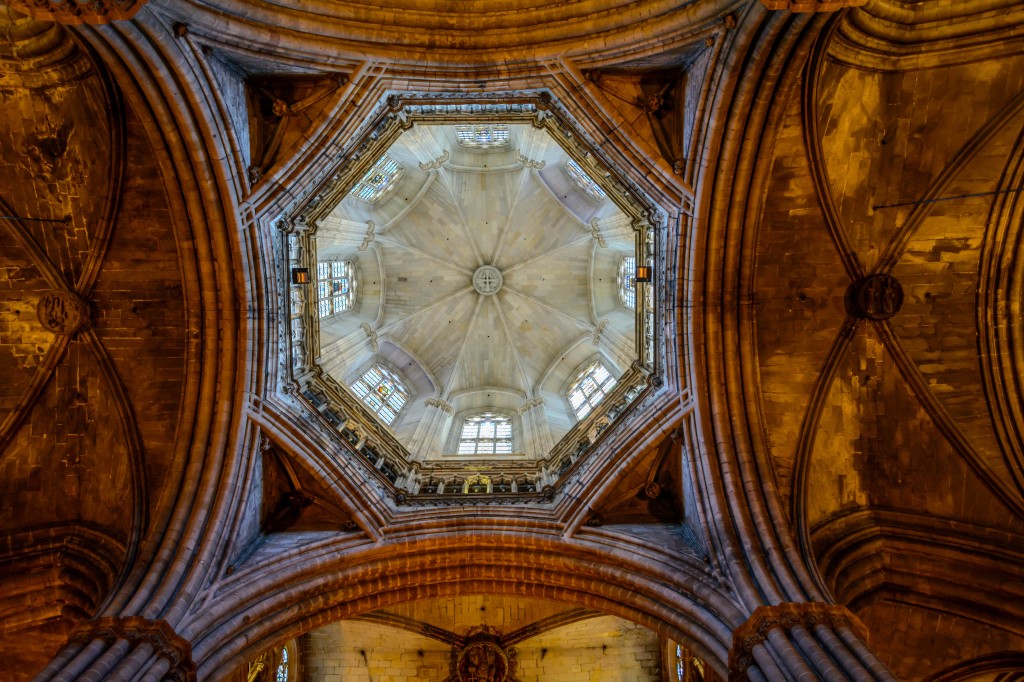 Some of the impressive parts of this sightseeing location is the back yard garden. 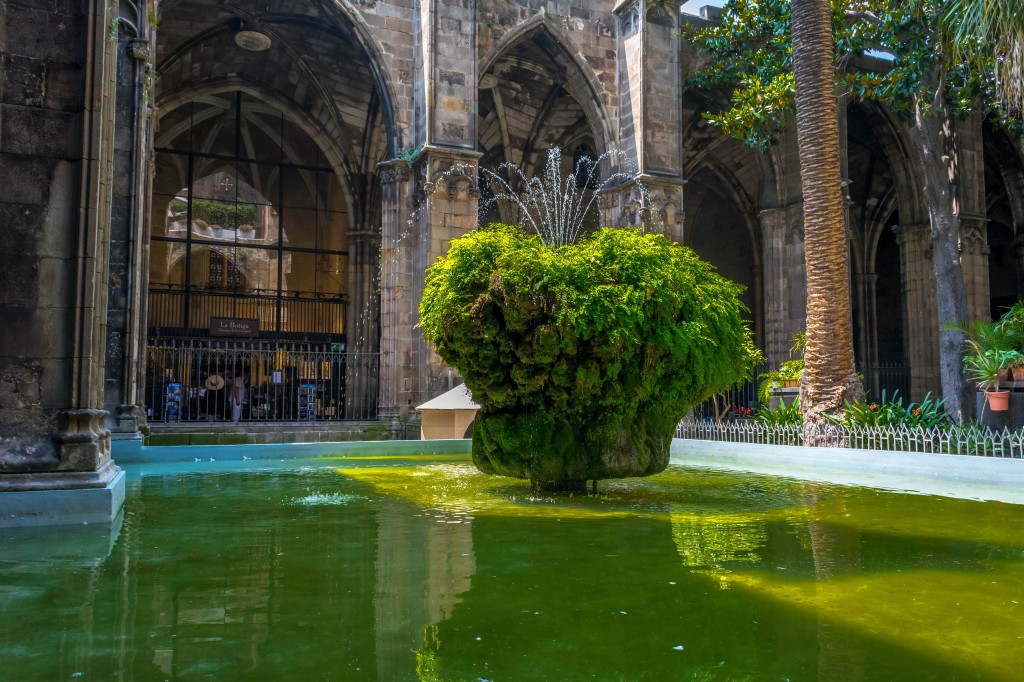 The garden of the cathedral

Outside the cathedral you can slide down the small streets of this beautiful district and be amazed when you see the neogothic bridge by Juan Rubio over Carrer del Bisbe street. 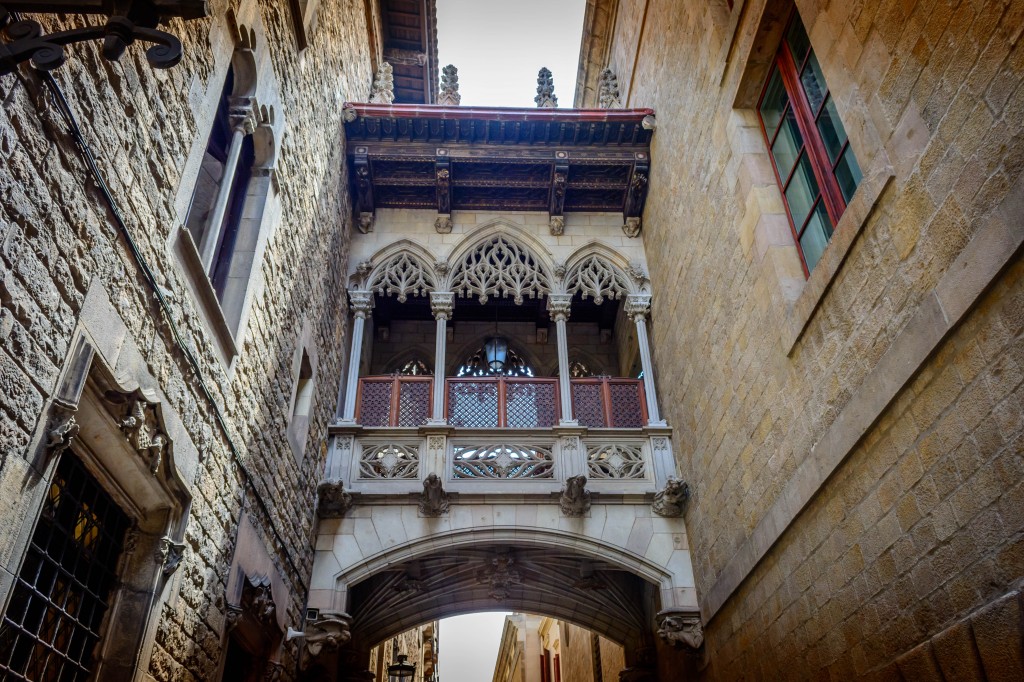 One place that was closed for visitors was the Bishop’s Palace just before the bridge you see above. The palace had a beautiful courtyard which I could not miss taking picture of. There was a security guard and people were not allowed to walk in the yard. This nice palace you can see on the photo below. 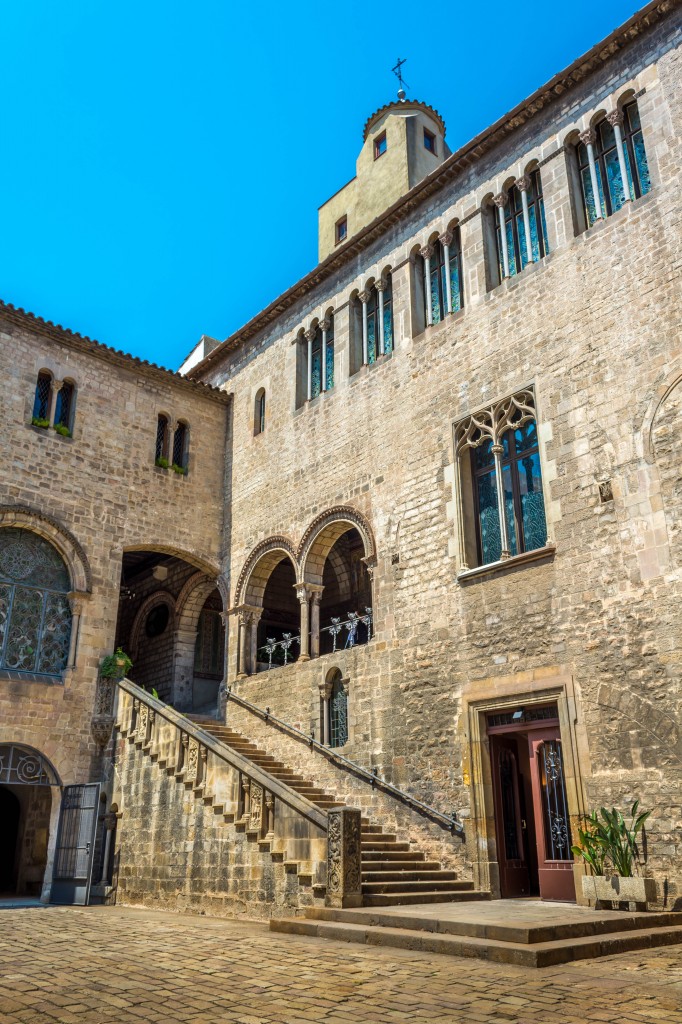 After trying to see Palau del Bisbe we headed off towards one Roman ruin site. This place is called Barcino Temple and is said to be the most ancient part of Barcelona. The four grand columns were part of the temple and the temple itself was in the center of the public city square-the Roman forum. The columns are part of a museum called Temple Roma D’August, Local Dei Centre Excursionista de Catalunya. The temple was build in late 1 century BC and the columns supported it. The temple lost its importance during 5th century AD and its columns were used in the construction of new palaces. 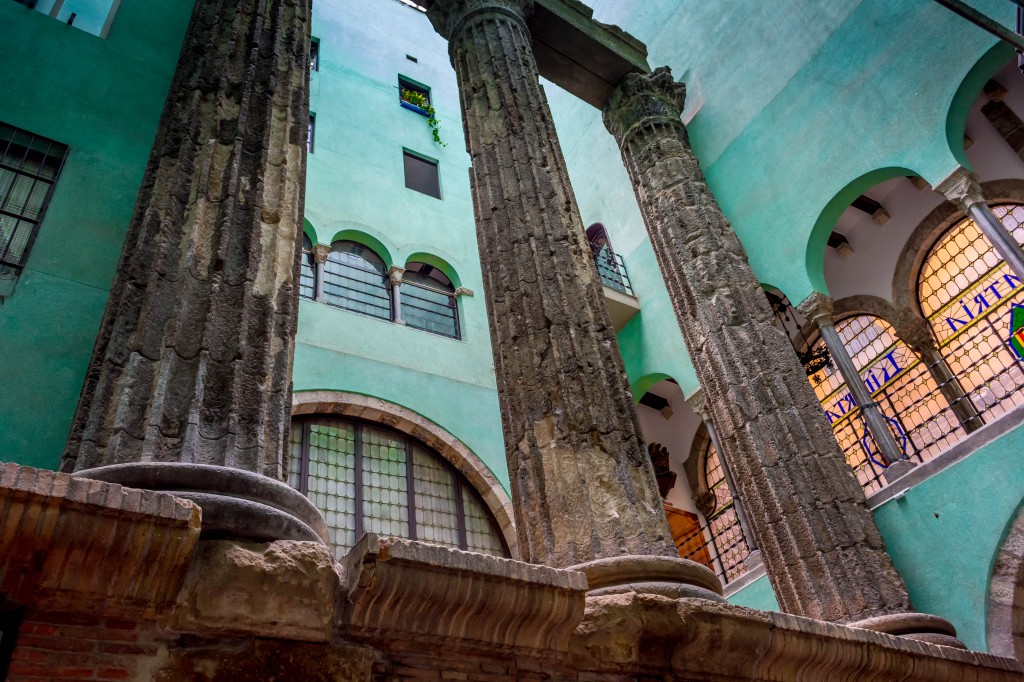 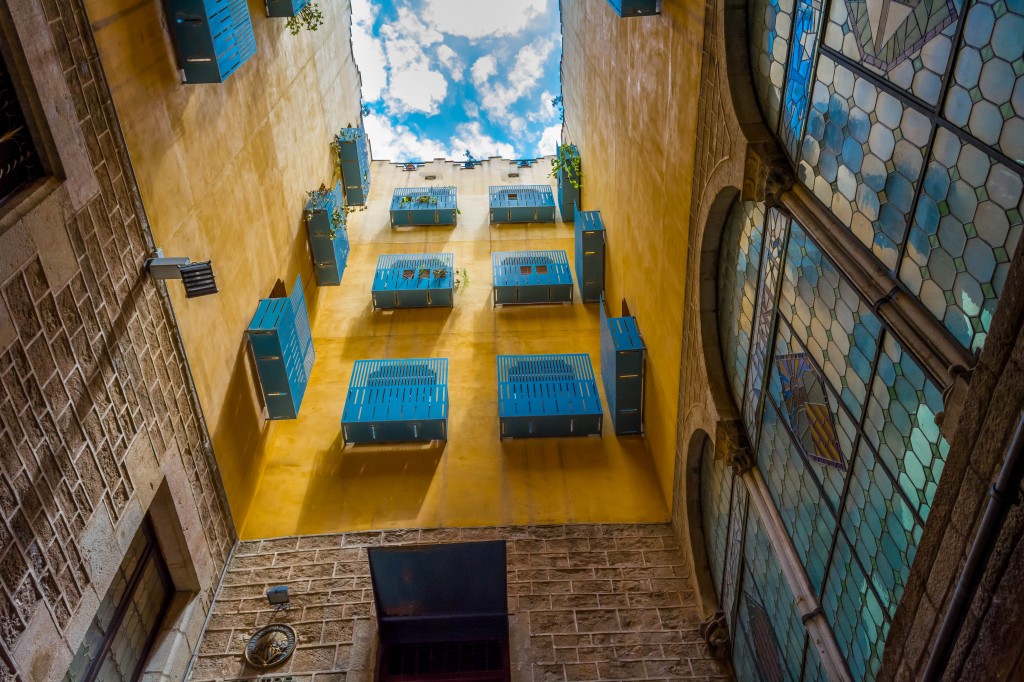 Close to Barcelona cathedral is the city History Museum which resides in a Gothic palace (Palau Clarina Padellàs). Under the palace one can find in the museum the ruins of Barcino (Barcelona in Roman times) one of the largest Roman settlements in Europe. The palace itself was inhabited by the royal family during 13th and 14th centuries. The courtyard where the next photo was taken is nowadays Placa del Rei, where it is believed that the royal family welcomed Christopher Columbus after his return from the New World. 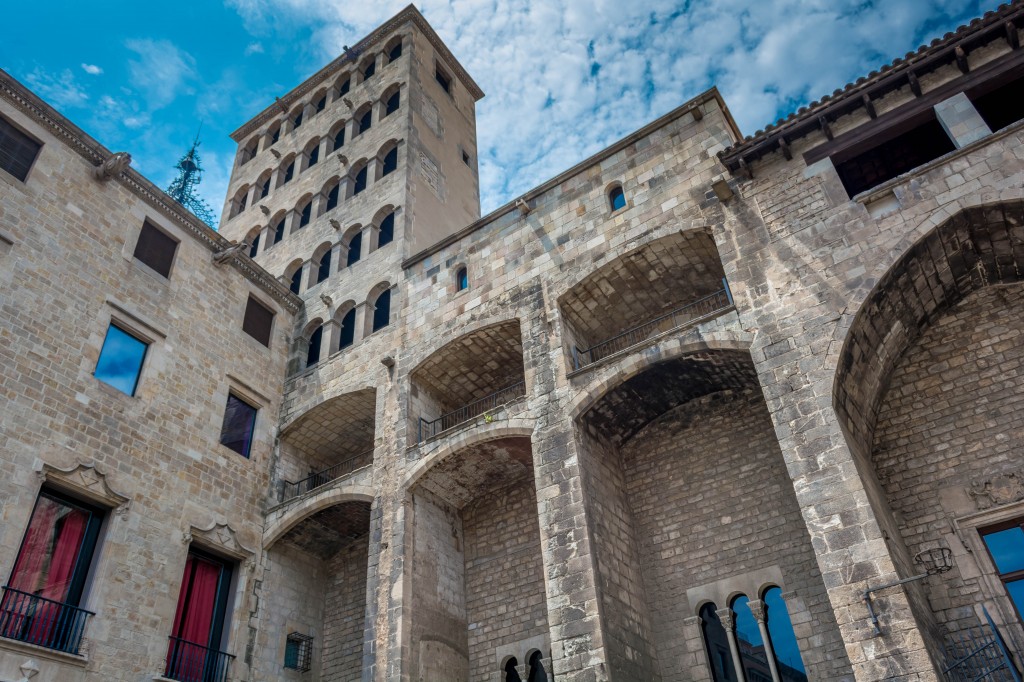 Since we were very fascinated of the old city we continued walking in its small streets and we arrived on Placa del Pi where we saw the church Santa Maria del Pi which dates back to 14th century. Some claim that there was a Christian church on this site even back to the year of 413 but the church that we see today was built between 1319 to 1391. 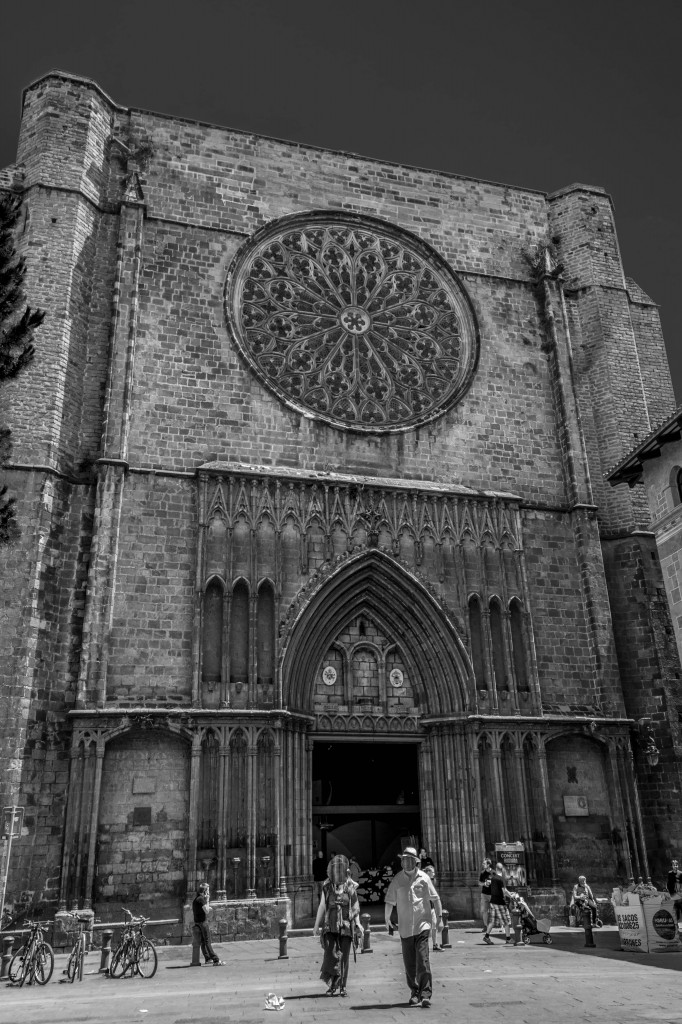 Further on our walk we arrived at Placa de Sant Jaume where you can see Department of the Presidency of the Generalitat de Catalunya and Barcelona Urban Adventures which you see on the photo below. 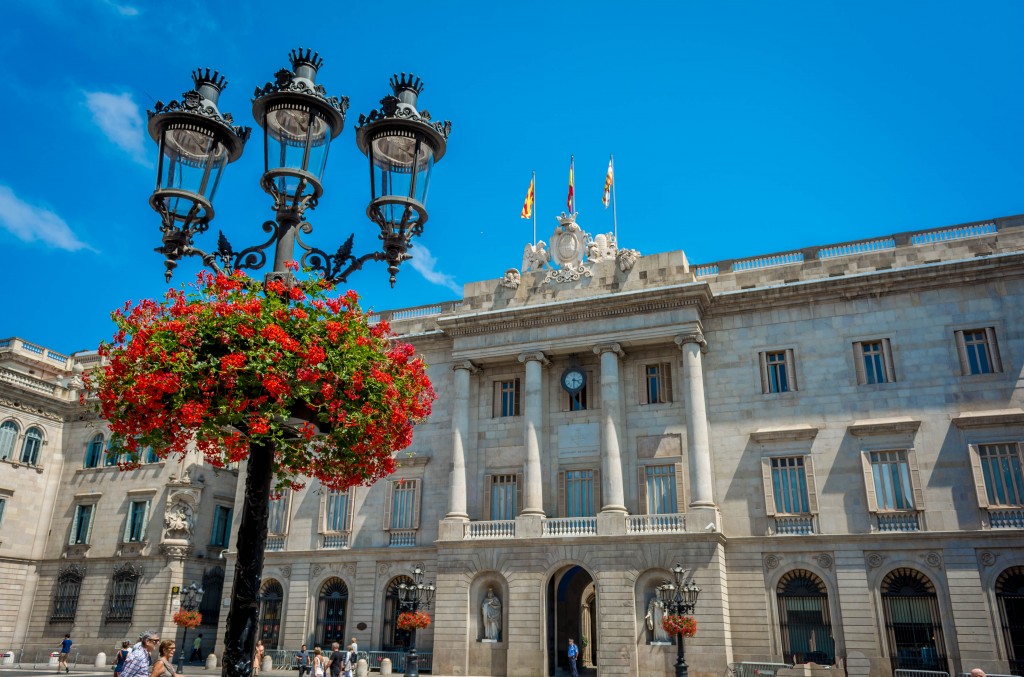 Here is where our long walk of the old city ended and continued towards the port of Barcelona. There we had a drink and a deserved break. 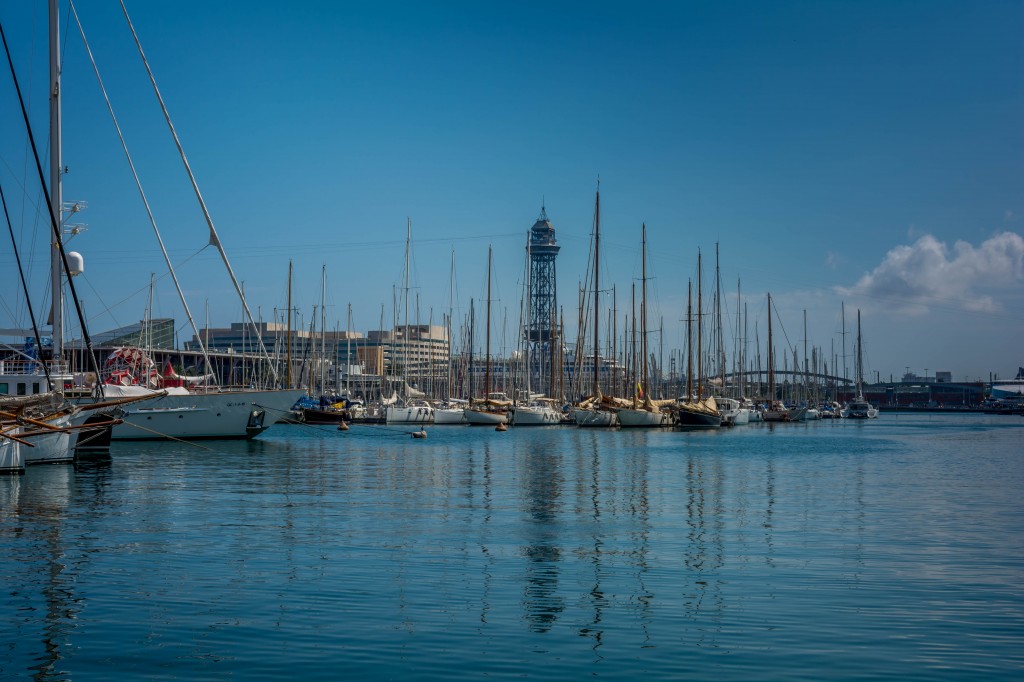 The Sea Port of Barcelona

Here is the time to place some stunning photos of one of the most beautiful buildings in Barcelona-the Post office. The building is grande and it has two towers, one shorter than the other. My photos of it from the outside could not capture it, but the ones I took from the inside are showing how beautiful this Post office building is. 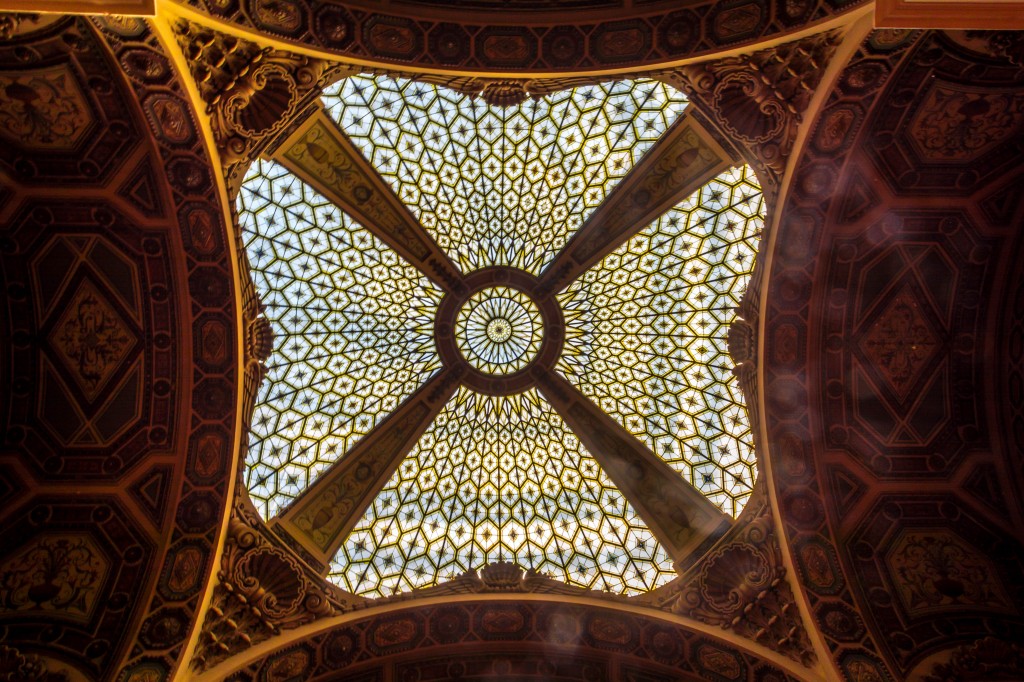 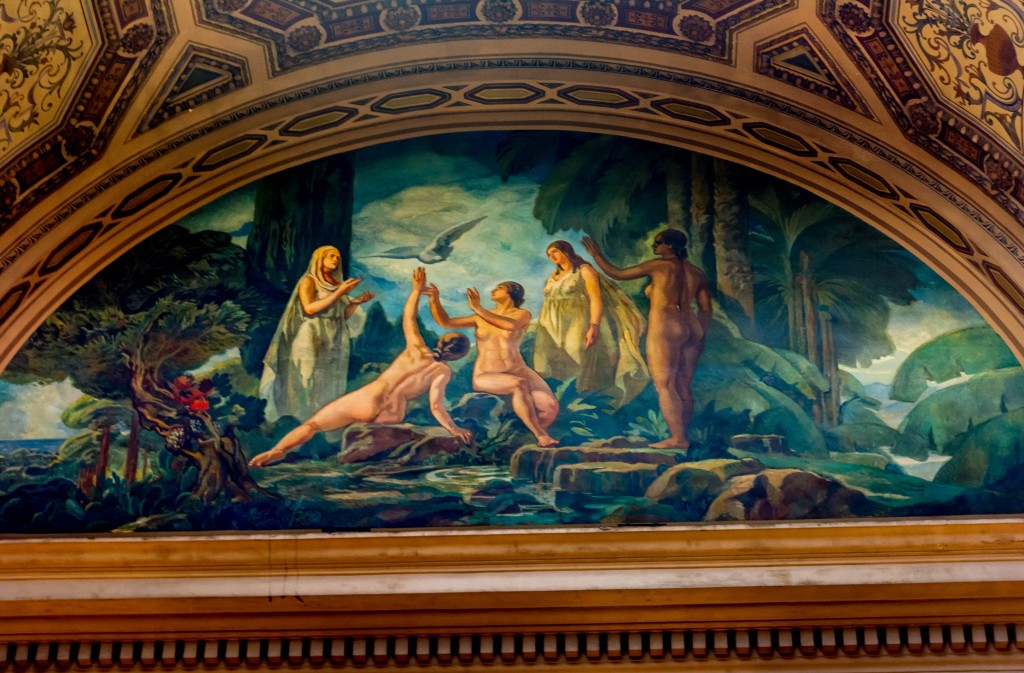 Paintings in the main hall 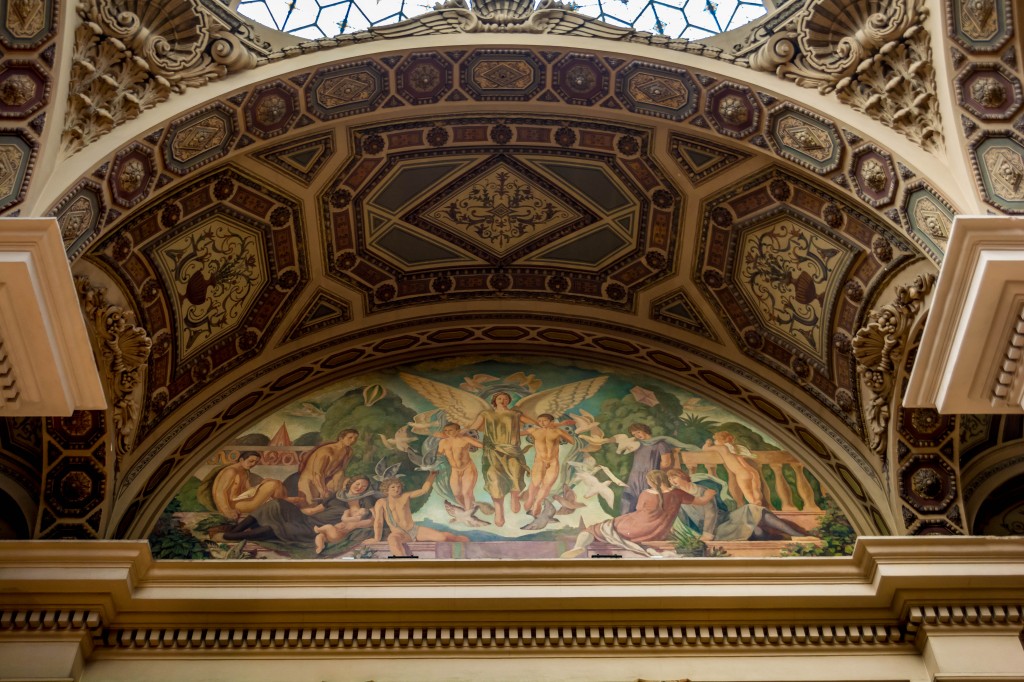 After spending some quality time under the dome of this amazingly decorated hall we decided to take our walk back again through the old town because we felt that there is much more to see in there, more small streets, more old churches, more fountains. 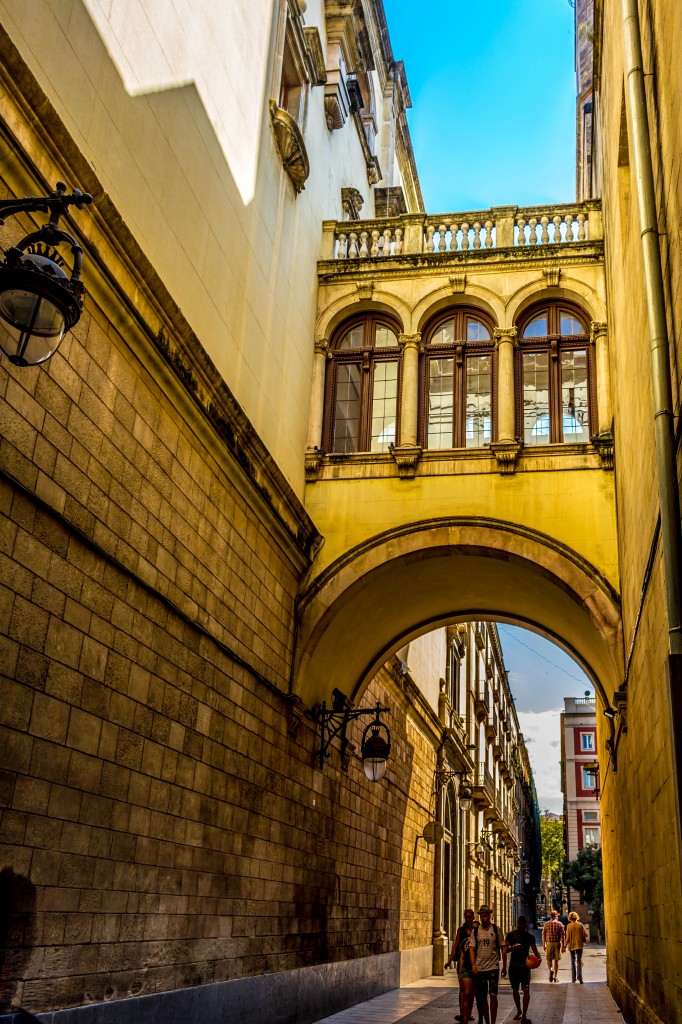 One of the hundreds of bridges between buildings

Next to this bridge there is a small stone church and a small square. 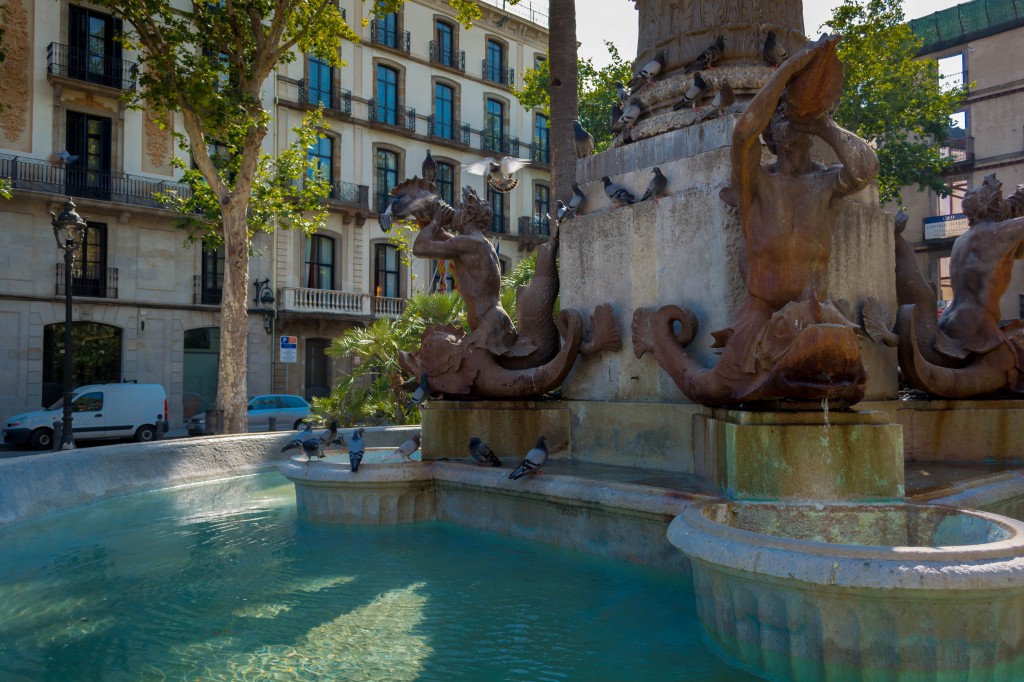 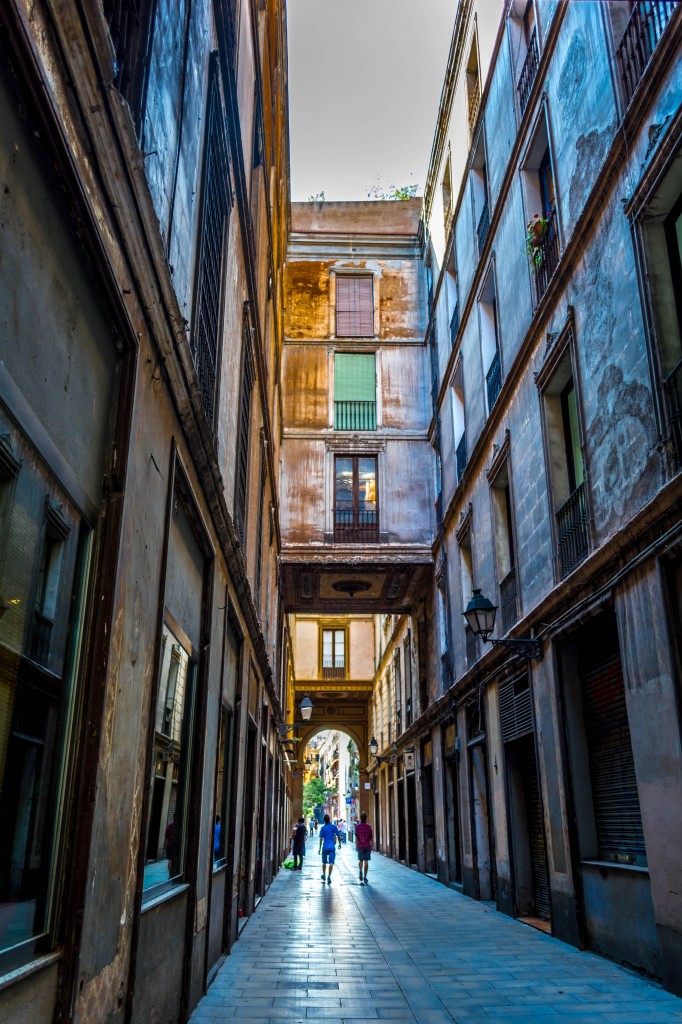 Now it was time to head back to our apartment and since we were close to the port, we happened to arrive at the Monument a Colom (Columbus monument) which is 60m tall and was constructed in 1888 in honor to Columbus first trip to the Americas. 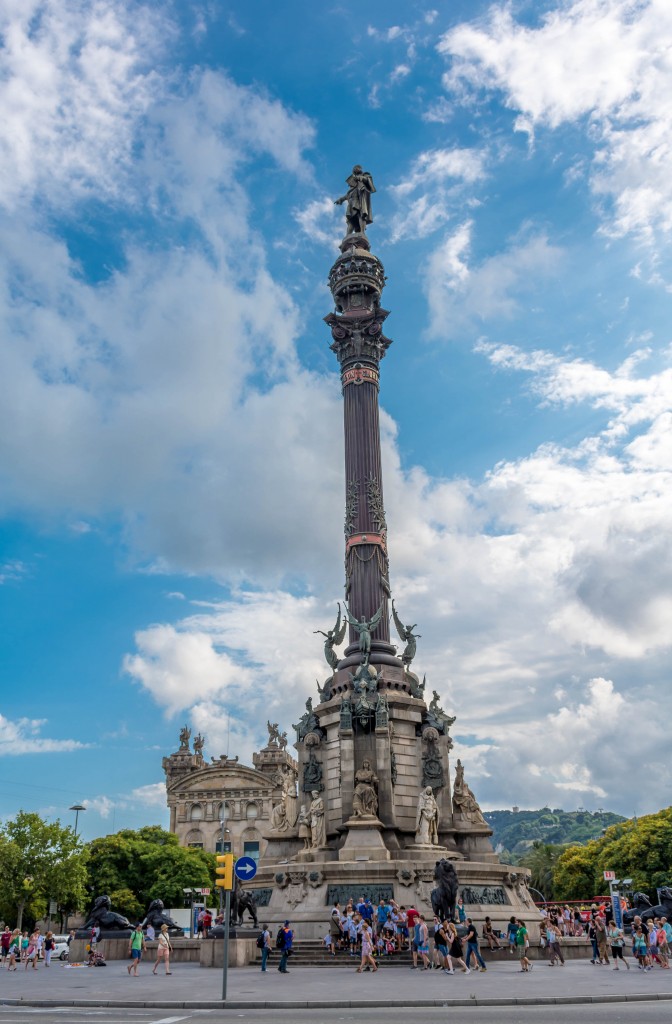 Last stop for a cold drink we made at La Boqueria – large public market, which dates back from 1217 but the building of the market started in 1840 and in 1914 the metal roof was constructed. It is one of the city’s foremost tourist landmarks. 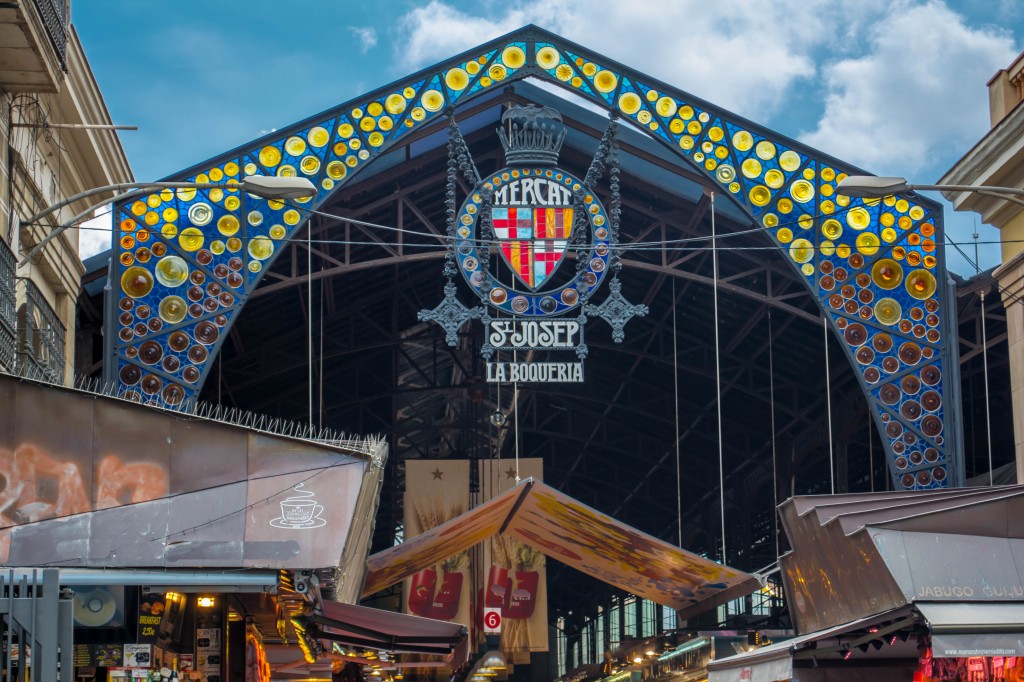 Some of the things which you can buy at the market are fruits, vegetables, all sorts of marine food, etc. 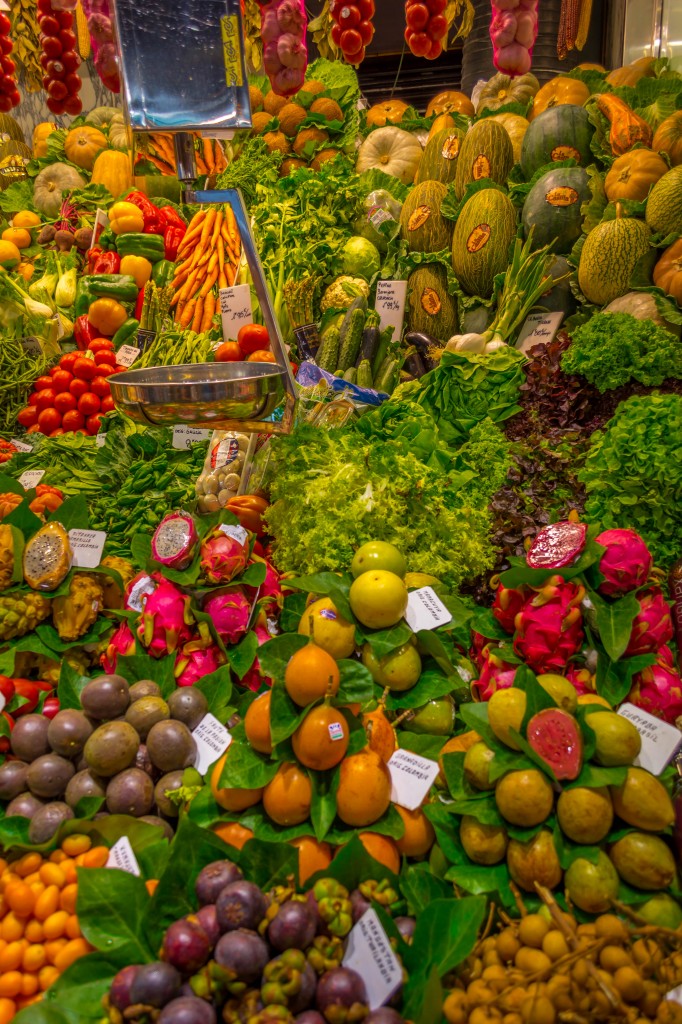 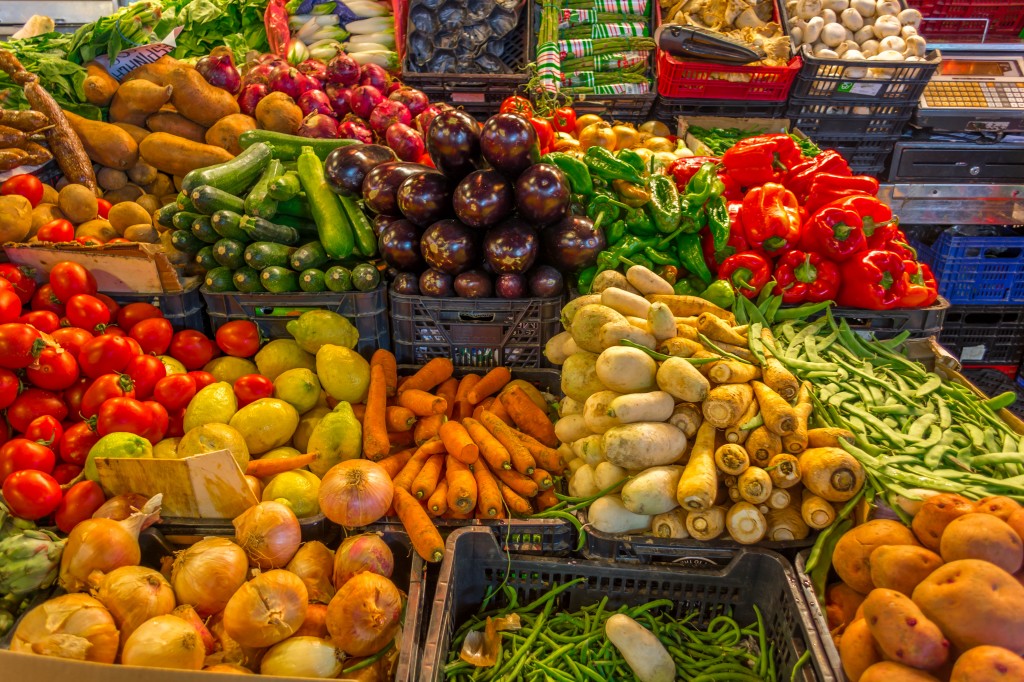 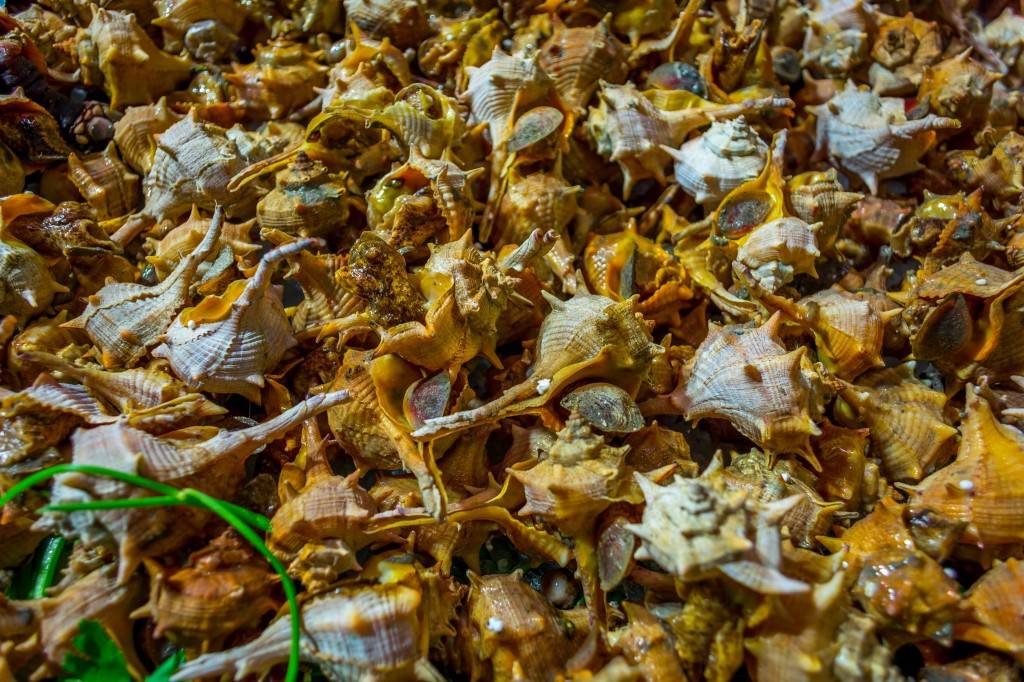 I seemed to be most sorry for the crab. 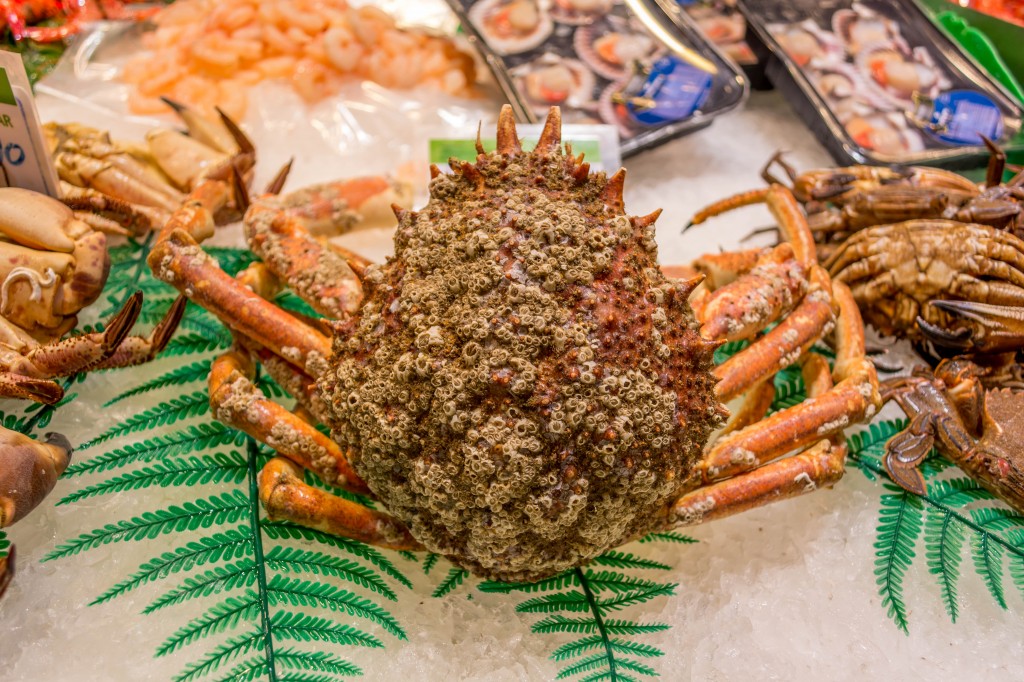 The crab who houses other organisms